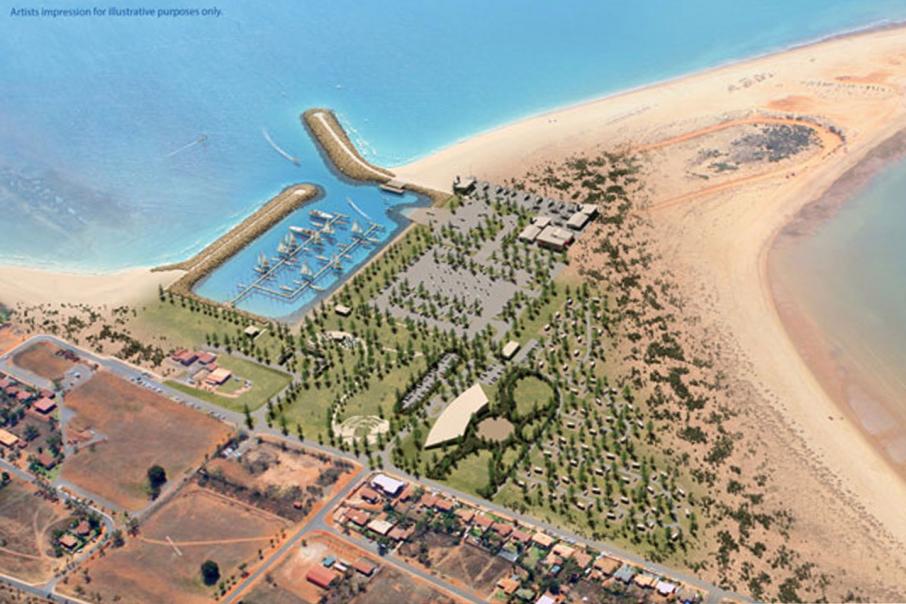 An artist's impression of the proposed Spoilbank Marina.

Premier Colin Barnett announced today that the funding for the marina, which is scheduled to be complete by late 2020, would comprise $72 million from Royalties for Regions and $40 million from consolidated funds.

The remaining $40 million would be pitched in by the Town of Port Hedland.

Mr Barnett said the marina, which will be the flagship development of the Spoilbank Waterfront Precinct, would comprise between 100 and 150 boat pens, a two-lane boat ramp, three sites for food and beverage operators, and a cultural and community centre.

Town of Port Hedland acting mayor Camila Blanco described the project as a game-changer, saying it was a turning point in the town’s history.

“This truly is a once-in-a-generation project, which will enhance lifestyle in Port Hedland while also bringing long-term economic benefits for our town, including more jobs and more small to medium business opportunities for locals,” Mr Blanco said.

“It will genuinely transform the image of Port Hedland and massively enhance our capacity to boost our economic base in key areas like tourism, which many experts are pointing to as the next big thing in Australia’s economic transformation.”

Development of the marina will be project managed by LandCorp on behalf of the Town of Port Hedland.

The state government’s commitment today marks the culmination of a 10-year journey to get the project off the ground.

An initial proposal, which incorporated a large residential component and a hotel, was knocked back by the Environmental Protection Authority  in 2014 over dust concerns from nearby minerals stockpiles.

The funding commitment will also likely be a catalyst for Finbar Group to advance its plans for a staged $400 million apartment project on the old Port Hedland Hospital site, which overlooks the proposed marina.

Finbar Group was granted planning approval to pursue its project in 2014, however the developer has previously stated the project remains subject to market conditions.