SPECIAL REPORT: WA’s economic slowdown hasn’t led to the dramatic rise in insolvencies many had expected, according to leading industry representatives. 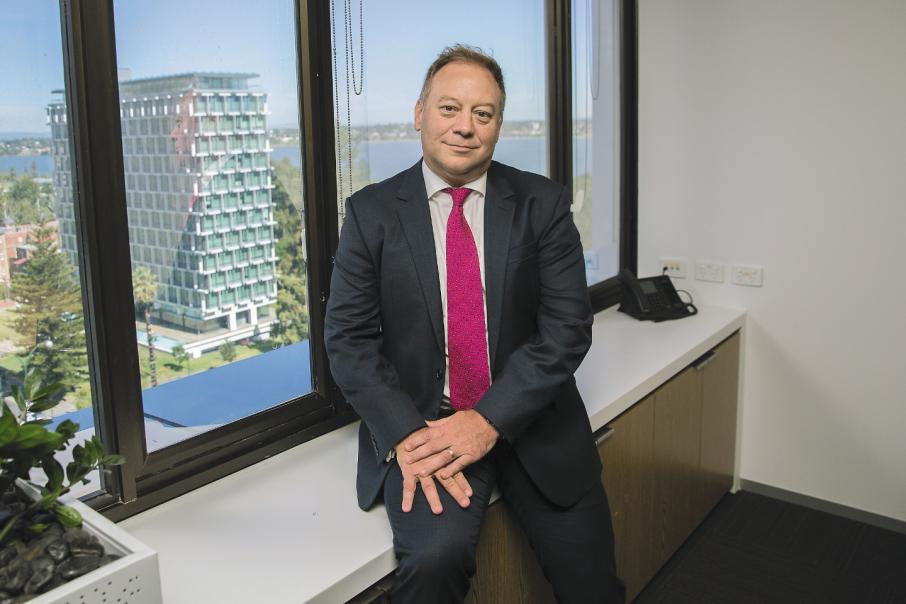 WA’s economic slowdown hasn’t led to the dramatic rise in insolvencies many had expected, according to leading industry representatives.

Low interest rates and business-friendly bank practices are among the factors keeping a lid on corporate collapses as the state’s economy hits the brakes, according to a number of high-profile industry professionals spoken to by Business News.

Nevertheless some small businesses are under significant pressure, particularly from the Australian Taxation Office, while construction is among a number of areas nationally facing problems sector-wide.

On a political level, the federal government is considering changes to bankruptcy laws – allowing bad contracts to be terminated due to insolvency while permitting businesses to continue operating on profitable contracts.

A further change would provide directors with immunity from insolvent trading claims if they appoint a restructuring adviser to help turn the relevant company around. 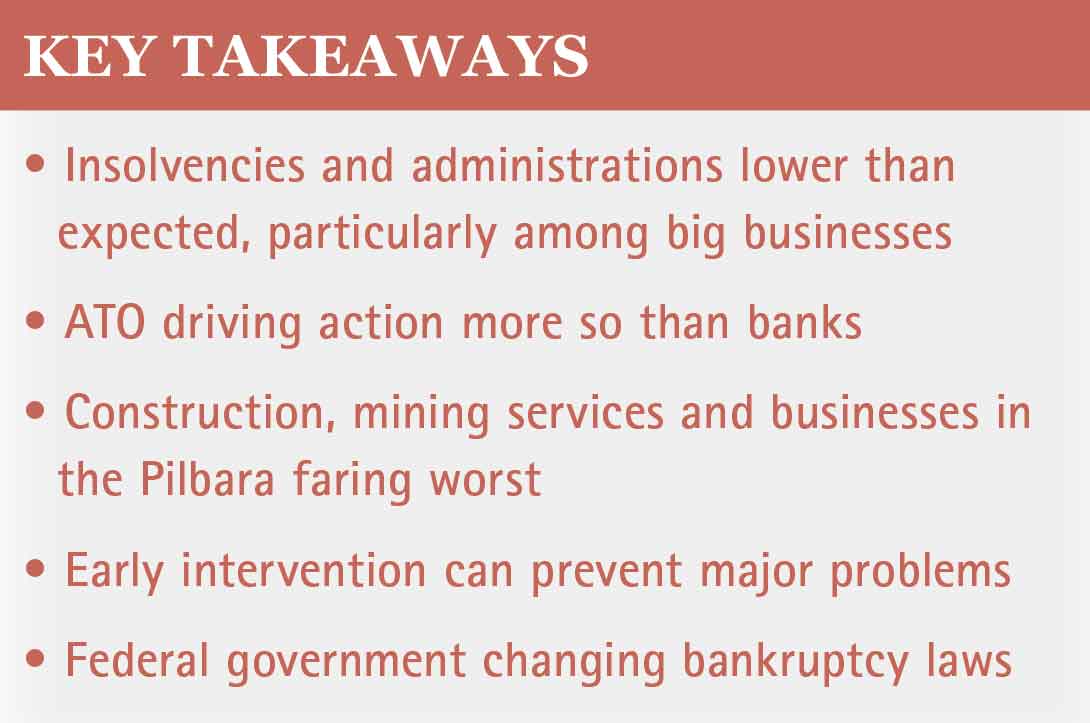 Among the notable Perth-based administrations in the past year was the voluntary administration of Quickflix, which is being undertaken by Deloitte’s Richard Hughes and Jason Tracy.

Quickflix creditors swapped administrators in May, removing Ferrier Hodgson representatives, as one had been involved with the business previously.

Business News understands it was an amicable changeover.

KordaMentha restructuring partner Cliff Rocke said the majority of the pain was being felt by small to medium enterprises, while broadly there was less demand for restructuring and insolvency services at the moment than was popularly perceived in the marketplace.

“I’ll go out and meet people and say I’m from KordaMentha … anyone who knows who KordaMentha is will say, ‘oh you must be absolutely flat out’,” Mr Rocke told Business News.

“While interest rates are so low, the banks are being serviced; that means that they’re not making any appointments.”

Other creditors did make the call, however, with the Australian Taxation Office involved in many cases.

“Banks generally act on what we call monetary defaults,” he said.

That is when a business fails to pay money due on a loan, rather than breaching covenants, which is a non-monetary default.

Most businesses were still servicing their bank debts, he said.

“The other thing with the banks is that they are focused on brand damage and brand preservation,” Mr Rocke said.

“There’s been a lot of Senate inquiries on banking conduct … albeit, I’ve always thought banks have acted properly.”

He said the bad news had been spread fairly broadly across industries, although the performance of the retail sector in WA was not as bad as it had been on the east coast. 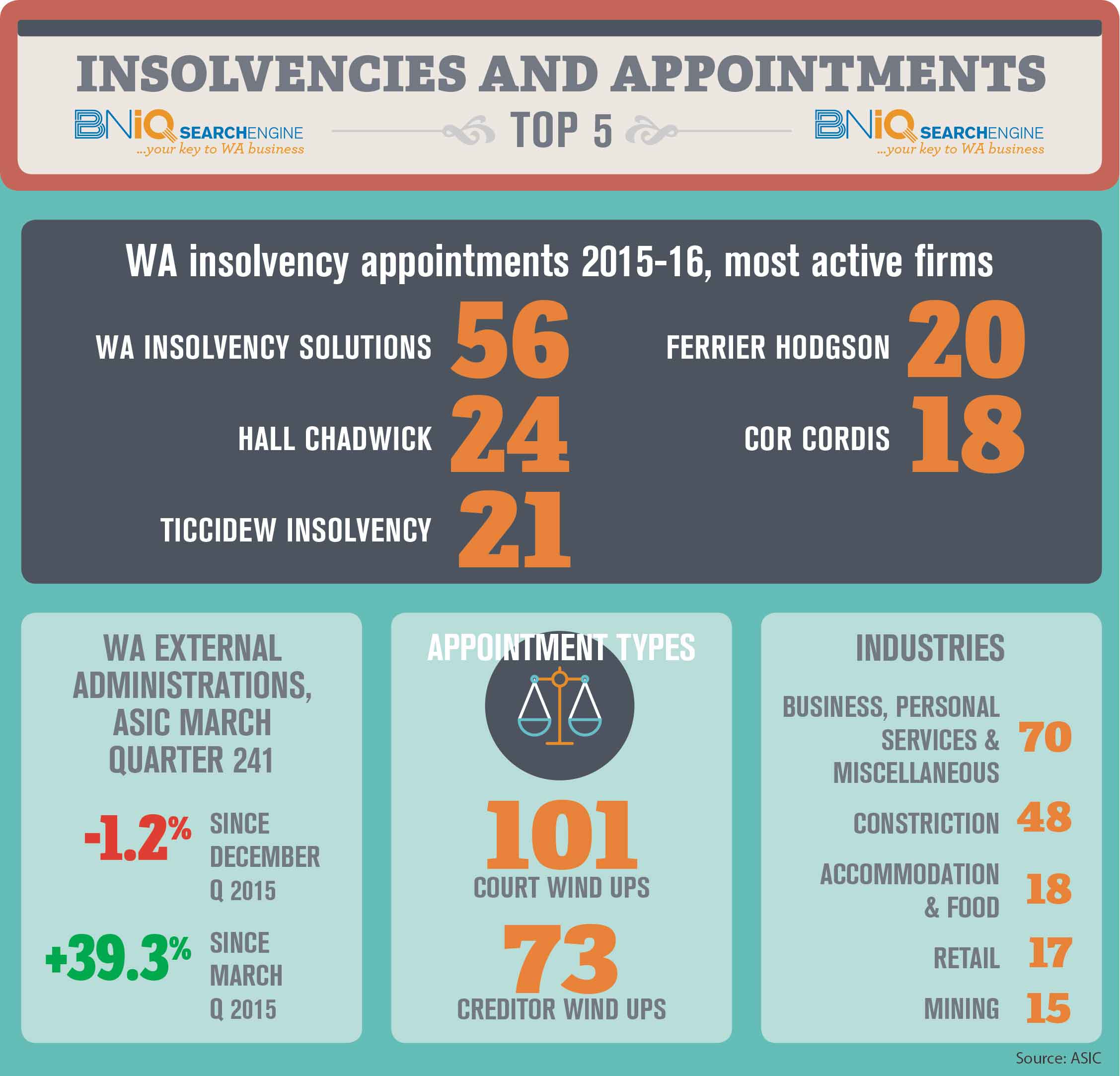 “We have seen an uplift, particularly in the areas of mining services and construction,” Mr Travaglini told Business News.

“Port Hedland was very buoyant. My memory of Port Hedland four or five years ago was … it was very, very difficult to find a place to do business, in terms of accommodation or staffing 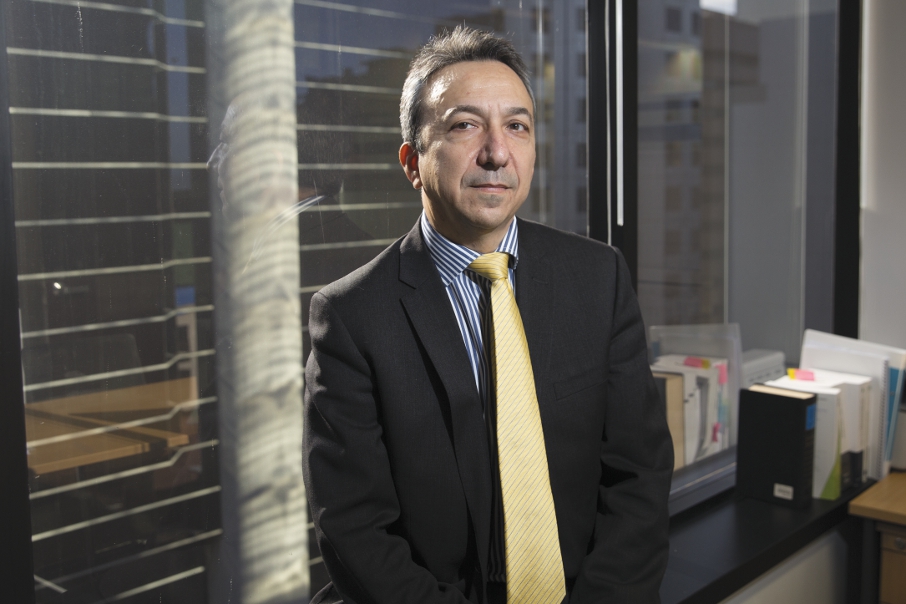 “That’s had a fairly significant change over the last 12 to 18 months.”

The impact had largely been on businesses lower down the supply chain servicing the mining industry, notably maintenance, labour hire and transport.

“We’ve had some properties up there which have been hit fairly hard,” Mr Travaglini said.

“We’ve done an analysis … over the past 12 months there’s probably been a 50 per cent diminution of value of properties in the area.”

That left few options for businesses that were not well capitalised.

Broadly, there was downward pricing pressure across the construction industry, he said.

Two components common among stressed construction and similar businesses were usually high leverage or an inability to withstand variations in contracts.

“In hindsight, looking at some of the businesses that have failed, one of the factors have been whether they’ve had the capacity to deal with the projects in the first instance,” Mr Travaglini said.

“Projects are volatile, they can go exceptionally well, but they can also go not so well.”

He said it was important companies were prepared for such unfavourable changes in circumstances.

Cor Cordis had been active last year and Mr Travaglini said he expected a bit more work to the end of this financial year, although the horizon beyond the next six months was unclear.

“What is encouraging is that there still seems to be an appetite for completion of projects; it’s not as though projects are being turned off,” he said.

“I’m not discouraged by the level of activity in construction, in mining services.”

Mr Travaglini felt it was not so much a matter of a bad downturn but a shift in the way business was done, in terms of pricing and cash flow.

An example of that was the Atlas Iron restructure, where transport player and Atlas contractor McAleese bought a stake in the embattled miner.

Mr Francis said such deals were a recent development.

He said business had been very resilient through the downturn, thanks partly to low interest rates, although a recession would change that.

“(But) the downturn we’re going through now will go on for a while,” Mr Francis said.

HLB Mann Judd principal (insolvency WA) Kim Wallman said he was getting lots of referrals from the small end of town.

Although referrals were high, he added, only one or two in 10 would end up in a formal appointment.

Mr Wallman pointed to a variety of industries, including those focused on discretionary spending, as responsible for the work.

Sometimes it was due to the downturn, although it was often due to individual circumstances in particular businesses, he said.

“It’s not usually the banks; of the ones that we’ve got, it’s largely the tax office,” Mr Wallman told Business News.

“And that’s fair enough … they’re entitled to try and recover it.

“You wouldn’t say they’re being aggressive, but you would say they’re certainly being more diligent than in the past.”

One issue that came up frequently in discussions with Business News was the reluctance by banks to call in businesses that had breached loan covenants, due to the domino effect it may start if one bank set the trend.

That was because banks might receive less from a wind-up than allowing a business to continue.

In contrast to that, Rio Tinto was forced to back down from a move to extend payment terms for its suppliers to 90 days, which would’ve put pressure on the cash flow for small businesses.

That number only includes WA-based companies that have provided notice of action through the Australian Securities and Investments Commission.

Ferrier Hodgson has been busy in regional areas, with The Walkabout Hotel and Karratha Caravan Park among a handful featuring Dermott McVeigh as appointee.

The latest ASIC data shows 241 WA business entered external administration in the March quarter, nearly 40 per cent higher than the same period in 2015, yet well down from the September 2015 quarter record of 300.

He said issues could also be dealt with through informal work in restructuring and turnaround advisory.

“We get involved (hired) at a time where we need to make the best out of a bad situation,” he said.

“The earlier that you attend to a matter of distress or stress, the number options of dealing with that situation are greatly enhanced.”

Mr Wallman agreed that early intervention was the preferred option for all parties.

“The earlier they come to us the more options we’ve got,” he said.

There are two big changes forthcoming in insolvency laws, as flagged in the federal government’s National Innovation and Science Agenda strategy outlined at the end of last year.

They are the introduction of a safe harbour for directors, and ipso facto clauses that change how contracts can be treated in the event of insolvency.

A working paper on the proposals was released in April, with submissions closing in May.

Mr Rocke said the ipso facto changes would probably increase returns for creditors, as administrators would be able to continue to operate profitable contracts while excising bad ones.

“Ipso facto will really complement the objective of the VA (voluntary administration) regime … a lot of companies have a mix of profitable contracts and bad contracts,” he said.

“We’ve dealt with a lot of companies that have gone under because of one bad contract.

“The ability to segregate that bad contract out of the rest of the company will really facilitate great opportunities to restructure and turnaround the business, particularly through the VA regime.”

The first is a broad defence for directors appointing a restructuring adviser, while the second is a partial defence if certain conditions are met, for debts incurred as part of reasonable efforts to return a company to solvency.

Minter Ellison partner Leith Ayres said the intention of the first proposal would help directors to be entrepreneurial in fixing ailing companies.

Mr Ayres said there could even be an argument for looking at the regime in the US, where there was a much lighter insolvent trading regime, while traditional director duties remained.

“We have a very strict regime, one of the strictest in the world,” he said.

“By the same token, we still have breaches, but then they’re not pursued.

“If we lessen the obligation and the duty – and let’s assume that there could be room for some sort of negativity coming out of that – maybe a greater amount of potential creditor loss.

“How does that risk balance off against the benefit that may come from freeing up?”

“Without any doubt, boards often appoint effectively out of sheer nervousness, and that’s something that really does need to be looked at further,” he said.

Mr Ayres said he was supportive of changes proposed to the rules governing external administrators being appointed to managed investment schemes, such as Timbercorp.

Those were proposed in the federal parliament’s Bitter Harvest report and would promote a better flow of capital through the schemes, particularly in WA, he said.

That included impediments to new responsible entities, which run such schemes, taking over schemes if the initial operating entity goes insolvent.

The schemes were difficult to wind-up, too, as they were complex and often underpinned by very long-term agricultural investments, Mr Ayres said.