Perth’s capital markets players reckon the past few months have been hard to take but they are seeing signs of growth as money returns. 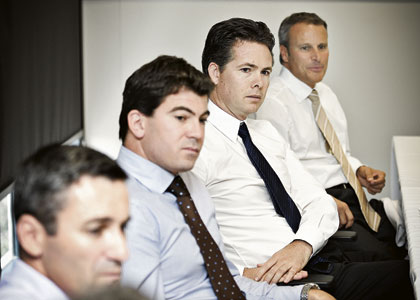 Perth’s capital markets players reckon the past few months have been hard to take but they are seeing signs of growth as money returns.

Operating in one of the world’s most privileged markets, where deals have continued to be done throughout most of the past few years despite the malaise afflicting global markets, even the optimists of St Georges Terrace reckon the end of last year was hard to take.

Western Australia’s booming resources sector has continued to attract the attention of the rest of the world, but local operators reckon the past few months have been as bad as it gets here.

They are hoping new signs of life will offer a reprieve.

“The last quarter was a graveyard no matter how you look at it and the best way to interpret that is to look at your own circumstances and think how many new issues and how many shares did you buy in November and December?” Mr Constantine asked, rhetorically.

“Not many. I have never seen it that bad but you will never get new issues done into a falling market.”

Grey Egerton-Warburton, head of corporate finance at rival broking house Hartleys, agreed that the end of last calendar year and the start of this had been particularly soft.

“There has been quite a bit less capital raised in this quarter and particularly the last six months; that is because balance sheets have been in reasonable states of repair and the softer (investment) markets,” Mr Egerton-Warbuton said.

However, he said there had been a significant pick-up in activity lately and was optimistic about the prospects for the year as a whole.

“I think the market has really turned for WA stocks in the past few weeks,” Mr Egerton-Warbuton said.

“I think you will see lots more companies going to market.”

Figures obtained for the 2011 Corporate Finance database, which WA Business News publishes on its website, bear out some of this commentary, although the headline numbers suggest there is a lag between when the advisers feel activity slowing and when the level of completed deals bears that out.

The data (see Corporate Finance) show that completed deals for the last quarter appear reasonable compared with the rest of the year, but new deals in the first quarter of this year are down considerably, suggesting advisers saw the pipeline being choked as concerns about global markets hit investor confidence.

Many of those at the WA Business News luncheon also noted that the volatility in international markets had tended to shorten the window of opportunity for corporate finance deals, with many companies going through several iterations of preparation for launch before going ahead.

Clayton Utz’s Perth corporate practice group leader, Mark Paganin, said there was typically a lot of work going on beneath the surface as companies and their advisers attempted to land a deal in shorter time frames.

“Sometimes you need a few false starts before you are ready to go,” Mr Paganin said.

Most agreed that, no matter what the conditions were like, companies with a solid story would usually get a hearing.

“For the quality raising, the money is still there,” said James Turnbull, corporate finance director at KPMG, a role for which he left PwC’s mergers and acquisitions division late last year. He has taken over from Adrian Arundell, who joined Azure Capital.

“The thing that comes with quality is being able to pick and choose your timing,” Mr Constantine said.

The initial public offering segment of equity capital markets has been similarly troubled.

Just a fortnight ago, WA Business News published a report that the Australia-wide listings on the Australian Securities Exchange in the first two months of the calendar year were approximately half the level of the previous corresponding period.

BDO corporate finance partner Sherif Andrawes said the IPO market was similar to that of the rest of sector, characterised by brief windows of opportunity and incongruent relationships between events offshore and local outcomes.

According to the market intelligence gathered by WA Business News, BDO is the market leader in providing independent experts’ reports for companies proposing IPOs.

“We are doing a lot in the background but it depends if the right window opens,” Mr Andrawes said.

“What you see that is really odd is if there is a cough in the US that it is not really affecting us here.”

He said the absence of retail investors was significant when it came to floats.

Mr Constantine said things were improving after the earlier sluggishness this year.

“We just closed an IPO today (Friday),” he said.

“Three months ago I would have said you are dreaming.”

Another positive for market players was the return of high-net worth individuals to the market, covering the middle ground between less-informed retail investors and more constrained institutional players.

Mr Egerton-Warburton said these players were often the earliest to spot the trend in the market and take a position.

“High-net worth money is absolutely red hot at moment,” he said. “There has been a lot of that sitting on the sidelines.”

Macquarie Capital executive director Michael Ashforth said interest in mergers and acquisitions was improving but all parties were being increasingly particular about what they were looking for.

“Our pipeline is stronger than it has been for a while,” Mr Ashforth said.

“Interest around the world has stepped up.”

One area he noted was the gold sector where some weaker prices had further fuelled talk of consolidation in the sector.

However, Mr Ashforth said the market was different than more heady times because companies were more picky in determining a deal that would really add value.

But he said against that more constrained background, management had changed its pitch and there was less concern from leading individuals with regard to their position after a deal.

“I think there will be more deals because people are not as worried about their job,” Mr Ashforth said.

Mr Turnbull said many of his potential M&A clients were attempting to determine the longevity of the boom, in order to put a value on acquisitions in areas such as mining services and construction.

“There is certainly a lot of interest in the mining services space,” he said.

“Also, it is measured interest because people are trying to work out when the construction boom ends.

“What does the world look like in five years’ time; if that is my horizon.”

“There is a lot of capital out there ready to be put to work but it is fussy,” Mr Anghie said.

“Just because you are in mining services doesn’t mean you are in the right area for long-term capital.”

One of the big issues, which floated around the table, was the changing perceptions of Chinese involvement in Australian companies – both from the investor and investee position.

Mr Ashforth said the boom-time investment approach from the Chinese had disappeared, partly based on experience with doing business in Australia and partly based on the political climate in the Middle Kingdom, where a once-in-a-decade leadership change has made state company leaders risk averse.

Chinese companies had burned significant capital in a number of projects, notably the Sino Iron development at Cape Preston, and had also been spurned as investors in areas such as Mid West infrastructure.

“They are no longer the fairy godmother,” he said. “There has been a definite shift to a more disciplined approach to investing.

“The Chinese have spent billions and billions of dollars not just here but in Africa where they are finding it harder to do things than they originally thought.”

A number of corporate finance players suggested this was not just as a result of poor investment outcomes but also wariness at changing rules of engagement, which made Australia a less certain destination for Chinese capital.

Azure Capital director Simon Price said everyone in the market had noted the changes of policy emanating from the Foreign Investment Review Board.

Chinese deals are particularly sensitive to FIRB rulings because state-owned foreign enterprises have an even greater level of scrutiny applied to them.

FIRB’s changing, and typically tightening, position on Chinese investment was viewed as a contrast to rival markets in Africa, which had put out the welcome mat.

“It sends a signal that we are not bending over backwards to attract their money,” Mr Price said.

“I think there might be a perception that barriers are being erected whereas in other places they are being removed.”

Mr Egerton-Warburton said the mining tax was one of the reasons that Chinese investment into Australia had stalled.

“If you are choosing between countries, the mining tax is a good reason to go, for instance, to Zambia,” he said.

Mr Constantine suggested that certain taxes were simply part of a bigger picture.

“Is it the mining tax itself, or the prospect of another change in policy that does your head in?”

But the corporate finance sector did not suggest that the issues around China were a one-way street.

There had been considerable consternation about the way Chinese investors wielded power behind the scenes and there had been negative experiences in the market about the way the Asian powerhouse’s investment companies operated as strategic stakeholders.

“That is a big difference now.

“Before there was desperation in the GFC; now if you have alternatives you may not want the headache of dealing with that particular foreign investor.”

Mr Anghie pointed out that foreign investment was not exclusively equity and that debt funding had played a big role. That had now diminished due to the tightening of the global banking sector.

“A lot of foreign investment that occurred into risky projects would not happen in today’s market,” he said.

“A lot of what we saw was debt funded and today they would not be able to get the debt to fund those projects.

“Some of those projects, particularly Indian-based projects, are not going to be able to get the capital to actually execute the plan they went into the investment on.”

On the local debt-funding scene, Commonwealth Bank head of corporate acquisition and advisory WA Steve Dorlandt said that, like equity market investors, banks had money available but had retreated to the quality end of the market.

“It is not the boom cycle anymore,” Mr Dorlandt said.

“We are unlikely to see those (again) in our lifetime. We are doing true leveraged finance.