Governments need to be encouraged to make decisions for the long-term good. 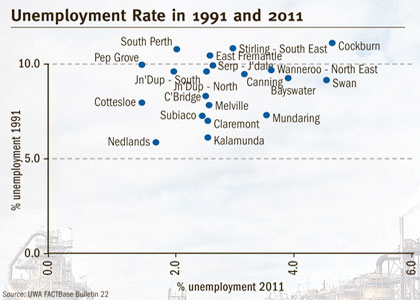 CYCLE: Despite its busy industrial base, unemployment remains a problem in Kwinana.

Governments need to be encouraged to make decisions for the long-term good.

THE events in Europe provide an interesting lesson for us – that we all need to pay attention to the fiscal policies of our governments, no matter how we might benefit from poor decisions in the shorter term.

Greek pensioners, who thought they had it made, retiring early on generous benefits, are now discovering that such distortions are short-lived.

The Greeks are all protesting about austerity but they ought to be having a good hard look at themselves. Their country lived on debt and they never asked enough tough questions about the nation’s financial position.

They turned a blind eye, probably because it suited them.

Perhaps the Greek government lacked transparency, but no-one was asking the right questions.

So, when we look at our situation, we ought to make sure that transparency is maintained and improved. We also need to make sure the decisions we reward our politicians for are good for the nation, not just for us, because that benefit is likely to be short term and we’ll end up paying for it in down the track.

I WAS sent an interesting article from the Wall Street Journal about Western Australia’s cashed-up bogans, using a driller on $200,000 a year as an example of the unusual economic circumstances here.

While the subject admitted he’d probably earn less per week than he does per day if he’d stayed in the city and worked as an car mechanic, he also said he spent all his earnings on toys and good times because he had to enjoy life between stints on the mines.

This is an interesting conundrum.

The mining boom is making some people rich who in normal circumstances would be in a lower socio-economic group. But, like some who win the lottery, you can’t force people to save.

Then again even the conscientious investors, who like a top sportsman realise their big-money-earning capacity may be limited, might not benefit either.

Those who have been ploughing their hard-earned into housing and other assets only to see it go backwards must be wondering if they should have spent it anyway.

This is one of the great challenges of this period. The really smart ones taking advantage of the boom will be investing in their skills and learning to be more productive – through education or by diligent effort to get promoted.

When the music stops, they will be in the best position. Australia has to do the same.

Instead, we have a federal government that is raising taxes and just spending it on keeping the voters happy.

The mining tax is part of this. It is sold as ensuring all Australians enjoy the wealth of the boom, but it will do nothing to solve the problem of the two-speed economy.

Certainly savings rates will go up if the super contribution is lifted to 12 per cent, but as many who hoped to retire in the past two years have discovered, the stock market isn’t necessarily any guarantee of prosperity in retirement.

That is especially the case if the mining tax is used to prop up unsustainable businesses, increase welfare and generally encourage people to keep doing what they are doing, instead of seeking to improve their lot by developing their skills and careers and, if necessary, moving to where the jobs and opportunities are.

THE Committee for Perth’s regular Factbase research report last month tackled the subject of the distribution of unemployment across metropolitan Perth and Mandurah from 1991 to 2011.

This a fascinating study in a couple of respects.

Firstly, it is pretty clear that Perth has done well across the board. Even the areas with persistent and relatively high unemployment have had that more than halved since the 1991 recession. There are almost no parts of Perth that have gone backwards; the kind of decline you see in cities where industry bases and population are symbiotic and the collapse of local employment results in a particular area becoming poor.

The closest we can see to that is parts of Wanneroo but I doubt a loss of market gardens led to greater unemployment. The likelihood there is that the thinly populated horticultural region has become a low socio-economic part of suburbia.

By contrast, Victoria Park, Belmont, Mosman Park and coastal parts of Stirling have moved from high unemployment to low-unemployment areas, reflecting their gentrification rather than any likely improvement in local employment options.

The stand-out among these statistics is Kwinana. This area, along with inner-Fremantle and inner-Perth, is consistently poor performing in terms of unemployment when compared to the rest of the metro area.

This is disturbing, suggesting entrenched issues such as welfare dependency that is inter-generational. At least we know where the problem is, even if we can’t fix it. The truth is that Victoria Park is better off because different people live there, not because the government or market forces suddenly found training and jobs for the local population.

The most disturbing thing about Kwinana’s unemployment is that it is in an area located near a very busy industrial base. It shows that the proximity of jobs does not necessary get people to work.

This is the same with the state in general. That there are unemployed people at all, when mining companies are screaming out for labour, suggests there are people who just don’t want a job. Kwinana, it seems, has more of these people than most places.

I WAS interested to hear about a new class of ore carrier being built called a Wozmax (Western Australian maximum), a 250,000-tonne vessel that has a broader beam and shallower draught to negotiate the tricky tidal ports of the Pilbara.

Rio Tinto has three of these ships being built by Namura Shipbuilding to join its small fleet of in-house vessels, the first to operate from the west coast.

Rio originally ordered the vessels at the height of the first mining boom, when shipping rates were close to extortionate and one answer was to become an owner-operator.

But things have changed. Rates have plummeted and there is about to be a glut of shipping as new vessels ordered during the last boom come off the slipways.

I also hear that there may be some political risk for miners that take the supply chain right to China’s doorstep. According to knowledgeable sources, China wants to control more of the shipping that it relies on to feed its economy, and may not look favourably upon ore carriers being owned by resources companies.

While Rio’s intention was most likely to simply ensure security of supply, it must be wondering why it bothered investing capital in ships that may never be worth the price it paid for them, and might be more trouble than they are worth.