John Langoulant has sought counsel widely, including with Kim Beazley, ahead of taking up his key post in London. 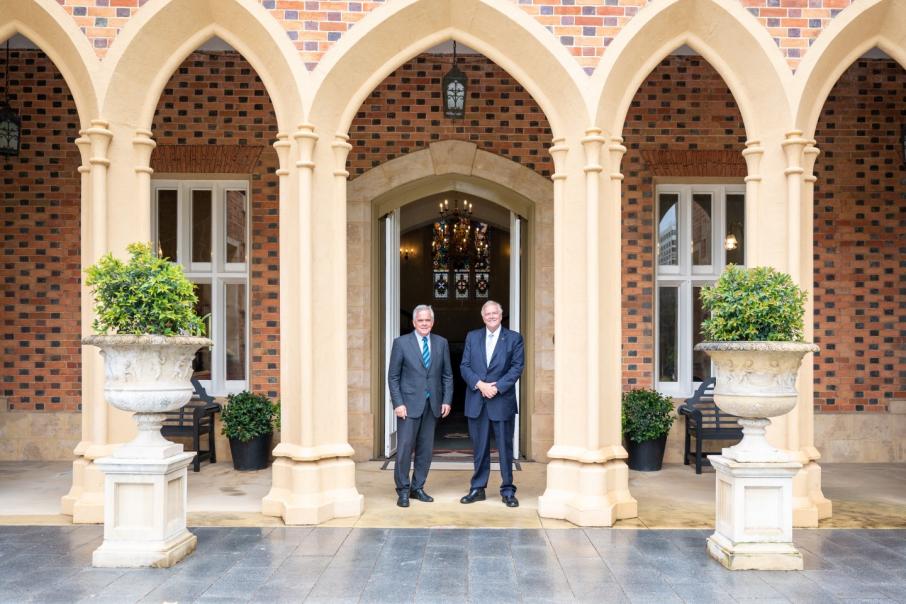 John Langoulant (left) caught up with Kim Beazley at Government House on the eve of his departure. Photo: David Henry

The position of Western Australia’s agent general in London has taken on many guises, including as a sinecure for retired politicians, since it was established in 1892.

The size of the staff has also varied according to the priorities of the time.

In 1915, for example, there were 30 on the payroll as the groundwork was laid for the post-war Group Settlement Scheme.

In the early 1920s more than 15,000 assisted British migrants arrived to try their hand at farming in the South West.

There were 45 on the staff, including many public servants from Perth, in the mid-1960s, mainly interviewing and selecting skilled migrants to fill vacancies linked with the Pilbara iron ore boom.

But when former under treasurer John Langoulant arrives in London this month as WA’s new Agent General, he will have a staff of just six and a very commercially focused operation.

It’s many years since a retired MP held the post.

When Premier Mark McGowan announced Mr Langoulant’s appointment, he said the challenge was to “attract investment and grow trade” for the state, noting that the role in WA’s “investment and trade office” took in European markets as well.

Everything seemed straightforward at the time.

But the mid-September announcement of the trilateral security partnership – AUKUS – between Australia, the US and the UK, has added another dimension.

In particular, Australia’s accompanying decision to scrap the $90 billion submarine project with France in favour of a nuclear-powered model – with likely strong British and US input – caused a near nuclear explosion in Paris and plummeting Australian-French diplomatic relations.

And while defence and foreign affairs are clearly a Commonwealth responsibility, WA does have a direct interest, with the current ageing Collins-class submarines, built in South Australia, based at Garden Island, south off Fremantle.

So, it was understandable that included in Mr Langoulant’s ‘soundings’ on the eve of leaving Perth was a meeting with the WA Governor Kim Beazley, a former Labor minister for defence and Australian ambassador in Washington.

Mr Langoulant has also drawn on the experience of former Liberal premier Richard Court, who was Australia’s ambassador to Japan, Stephen Smith who has held both the defence and foreign affairs portfolios in Labor governments, previous agents general, state ministers and senior public servants.

Mr Langoulant’s background gives him a solid grounding for his new role. A trained economist, he spent his early post-university years in the federal Treasury in Canberra, at one stage serving as personal assistant to high-profile Treasury secretary John Stone.

He was appointed head of the WA Treasury in Mr Court’s first term as premier and was reappointed under Labor premier Geoff Gallop, before moving to the private sector as head of the WA Chamber of Commerce and Industry.

In recent times he has held posts as varied as chairman of the Government Employees Superannuation Board, the Rottnest Island Authority and Infrastructure WA, as well as the Northern Territory’s Power and Water Corporation and the Telethon Kids Institute.

An assiduous networker, Mr Langoulant is under no illusion as to the challenges he faces in his new role.

“[These are] breaking through as a new face in a marketplace that is very busy … and continuing to raise the profile of WA in the context of the rising significance on Australia, particularly around the recent AUKUS agreement,” he said.

“Also finding and promoting those competitive advantages that WA offers the world, including the now accelerating focus on green energy and climate change initiatives linked with the Glasgow climate conference.”

But he won’t be drawn into any Australian-French diplomatic sensitivities following the cancellation of the submarine contract.

“I think we just talk with the French about the important business opportunities that exist between our two countries,” he said.

“I’ll leave the politics for others to fight – that’s not my game.”

A promising start in a challenging role.