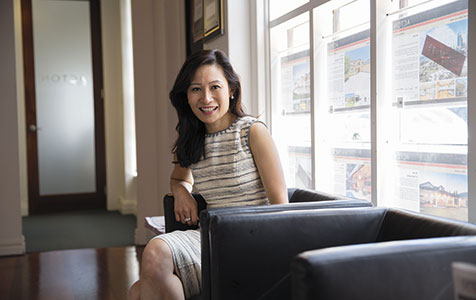 Earlier this year, the ACTON Dalkeith Real Estate agent was named Western Australia’s top real estate agent and the nation’s best female agent, by Real Estate Business magazine, after selling more than $150 million worth of western suburbs homes during the past 12 months.

The magazine ranked Ms Yap the fifth best agent in Australia, with her 90 properties sold over the period achieving an average sales price of $1.6 million.

The accolade added to a growing list of awards won by Ms Yap, not the least of which was the title of WA’s number one real estate agent, awarded by the Real Estate Institute of Western Australia in September.

Ms Yap only began selling property professionally in 2011, having previously owned a string of pharmacies in the Perth metropolitan area.

When it came time for a career change, Ms Yap said she wanted to do something she was more passionate about.

“I’ve always loved real estate, and when I sold both my pharmacies I realised there was something else I could potentially do,” Ms Yap told Business News.

“I started off selling a friend’s home and then it just snowballed from there.”

Despite the impressive sales record and the growing list of awards, Ms Yap is taking the accolades in her stride, saying she still has a lot to learn from her more experienced colleagues.

“It’s certainly nice to be recognised, but it doesn’t mean that I know everything,” Ms Yap said.

“I’m working very hard to make sure I can stay up there, so I do feel that I need to learn a lot more, especially from the more experienced agents.”

Ms Yap said there was no single secret to her success, except for a commitment to hard work.

She meets with an average of 100 potential buyers or sellers each week, and conducts a thorough process to make sure the properties she presents are appropriate for each purchaser.

“As long as you do the right thing by the sellers at all times and work really hard, those are the things that matter,” Ms Yap said.

“A lot of people give up too easily. You’ve got to give it a real good go, but you’ll have a lot of failures before you get wins.

“I always take the failures to be my learning experience. It comes down to not giving up and staying positive.”