Warren Buffett has a rule of thumb comparing total equity values to GDP – and says the US market is becoming overheated. 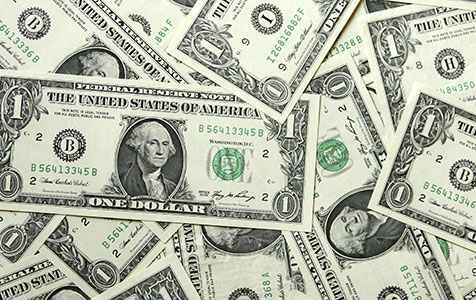 When the world's leading investor, Warren Buffett, speaks everyone listens and, recently, he warned that a key measure he uses as rule of thumb about the US economy was reaching into territory that suggested danger.

The founder of Berkshire Hathaway (you will find attached to this article the letter he released this week to accompany the company's annual results) has said in the past that he thinks the best single measure of where equity valuations stand at any particular point in time is the ratio of the total market capitalization on Wall Street's S&P 500 to the total dollar value of the US GDP. 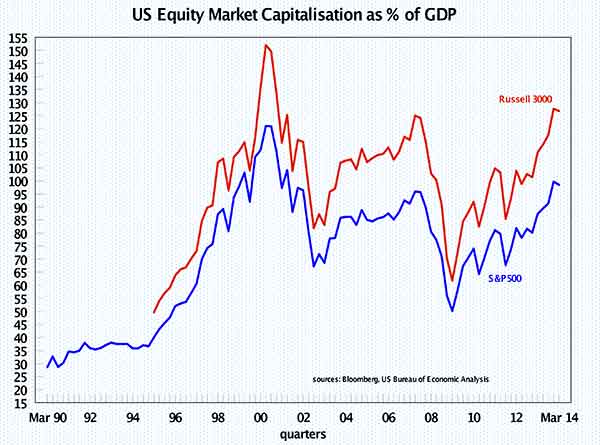 Mr Buffett’s view on the economy is, apparently, guided by when the combined value of listed equities is more than 100 per cent of the total goods and services in the economy, which means it is time to be wary about the stock market. This is a measure chosen from experience and reflects a relationship between the numbers involved.

Recently it was reported that Mr Buffett had noted US equities had risen well above 100 per cent of the $US16 trillion GDP. He came up with a number of 115 per cent. Although Mr Buffett is citing this as a warning, it might be early days. In the year 2000, just before the dot.com crash, the US total market capitalisation was, I hear, more than 180 per cent of GDP.

Be warned, though, everyone, it appears has a slightly different way of coming up with historic GDP - which means that the percentage difference highlighted for the S&P 500 at the 2000 tech peak can be as 'low' as 120 per cent as this first graph provided by Bankwest shows. This shows that last week the S&P 500 (in blue) sat almost exactly at 100 per cent of GDP, while another equities index, the Russell 3000 (in red), was closer to 130 per cent (please click on the graph to see it in full and more clearly).

The point with this, as in all such subjective measures, is to watch the trend rather than necessarily focus on specific absolute numbers.

According to this graph, in 2007, just as the causes of the GFC were emerging in the US housing sector. the ratio was slightly below 100 per cent, whereas I have read elsewhere it was at 135 per cent.

Conversely, the low point for stocks by this graph was in March 2009 when the ratio of market cap to GDP was about 50 per cent, whereas others cite numbers as high as 75 per cent.

I asked Bankwest chief economist Alan Langford recently if he had comparable data for Australia.

With a great deal of caution about this measure he supplied me these graphs, with the second one showing the All Ordinaries (in blue) as percentage of GDP compared with the S&P 500 (in red) as a similar measure against US GDP. Both are converging at around 100 per cent, from very different positions. It is interesting to that while Australia's market at its recent peaks was much higher in comparison to GDP than in the US, Aussie equities have performed against the backdrop of a continuously growing economy while US markets have not.

On this subject, Mr Langford had the following to say:

“By the end of last year, the market capitalisation of Australia's listed equities expressed as a percentage of GDP ticked back up over 100 per cent for the first time in almost 3 years,” the Bankwest economist said. 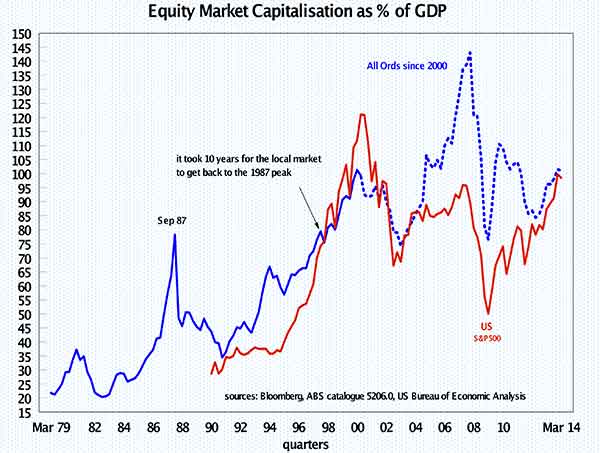 “But there is nothing necessarily magical about a ratio above 100 per cent, because market capitalisation has been built up over a number if years, whereas the GDP part of the ratio is the value of all goods and services produced in a single year.

“The ratio remains well below its pre-GFC peak of around 150 per cent in December 2007, when the credit crunch was well under way, but before it had become the GFC.

“And before the deepest recession in the major advanced economies since the great depression was over, local shares' market cap had dropped as low as 70 per cent of annual economic output, even though Australia avoided recession.

“Going back to Australia's most recent recession - the one we apparently had to have, in the early 1990s - it took the All Ordinaries a little over six years to get back to its pre-October 1987 crash peak, but it was another four years before the total market's capitalisation as a percentage of GDP hit a new historical high.

“So it is not unusual for the value of all listed equities compared to GDP to track at best sideways for long periods, particularly when it straddles a recession or a major dislocation to capital markets. And they don't come much bigger than the GFC.

“The market capitalisation of the benchmark S&P500 index of US stocks also equates to around 100 per cent of annual US GDP of around $17 trillion. But, in contrast to the local market, it is a touch higher than it peaked at prior to the GFC. But it is still well shy of its tech bubble peak of a little over 120 per cent.

“Australia's nominal GDP is now 25 per cent higher than its GFC low point, while its US counterpart is only around 18 per cent up on its June quarter 2009 nadir. Moreover, nominal US GDP contracted by 2.4 per cent peak to trough during the GFC, but Australia's dipped by less than 1 per cent.

“So taken together, the modest downturn in the local economy in the shadows of the GFC and its more robust expansion since equity markets bottomed in early 2009 means that the domestic equity market would have needed to have grown quite a bit more than the US market to keep up with a more robust economy. But it hasn't.

“And whereas the tech peak was the US high point to which it has not yet scaled again, Australia's was in the middle stages of resources boom Mark I. Which is quite a mountain to climb.”