Tinker with the hiring credit 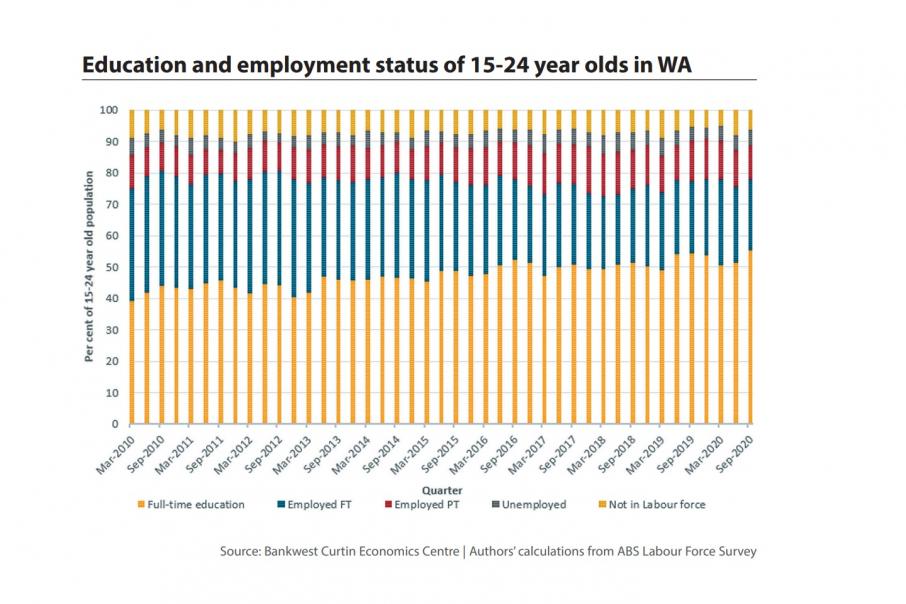 Even before younger workers were hit hard by the pandemic’s shutdown of the hospitality and retail sectors, high youth unemployment rates were never far from the headlines in Western Australia.

Eligible jobseekers must have been on benefits for at least one of the previous three months.

There has been significant concern that the ‘hiring credit’ would benefit young jobseekers at the expense of older workers.

In light of the new policy, it seems timely to take stock of the youth labour market.

This chart shows employment trends for 15-24 year olds in WA over the decade to the most recent September 2020 quarter, but separates those in full-time education from other youth.

A trend of increasing participation in full-time education is apparent, rising from around 40 per cent of 15-24 year olds in 2010 to over 50 per cent now.

While there was a slight uptick in the September quarter, this trend clearly predates COVID-19.

At the same time, the share of youth in full-time employment has fallen by about the same 10 percentage points.

It may surprise many to hear that the share of young people (outside of full-time study) employed part time and unemployed has remained quite steady during the past decade.

The share of 15-24 year olds who are unemployed has remained in a range between 3 and 6 per cent all decade, and was 5.2 per cent in the September quarter.

This is different to the headline youth unemployment rate, currently 14.3 per cent, which is expressed as a proportion of those participating in the labour force, thereby excluding many in full-time education.

Commentators often mistakenly infer that one in seven WA youths are unemployed; the figure is more like one in 20 if those in full-time education are not counted in the unemployed category.

Recent figures for other age groups are available only at the national level.

For those aged 35-39 years, who just miss out on eligibility for the hiring credit, the unemployment rate was markedly lower at 4.6 per cent in September, little change from 4.3 per cent a year ago.

Wage subsidies have been found to be one of the more effective forms of labour market programs.

So-called ‘substitution effects’ have always been a concern: where employers hire an eligible worker in place of another jobseeker they would have employed anyway.

However, lessons from previous recessions show there can be a benefit to the economy from simply rotating the pool of unemployed, as long as assistance is targeted to the most disadvantaged jobseekers.

The figures above offer qualified justification for the age groups targeted by the hiring credit.

However, a greater weight placed on jobseekers’ time in unemployment, rather than their age, would likely ensure assistance was more closely targeted to the most disadvantaged and avoid damaging the prospects of older jobseekers.