THREE generations of the Bedbrook family have been involved with the Paraplegic Benefit Fund since patriarch Sir George Bedbrook founded the not-for-profit organisation in 1984. 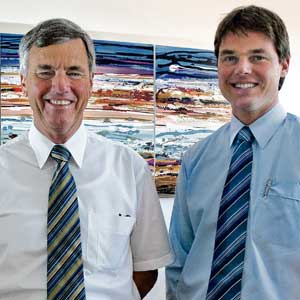 THREE generations of the Bedbrook family have been involved with the Paraplegic Benefit Fund since patriarch Sir George Bedbrook founded the not-for-profit organisation in 1984.

Sir George established the fund with son David, who has been on the board since the organisation's inception.

David's son Simon was appointed to the board in 2007 and is now an executive director.

But despite the unique family connection, David has maintained that the PBF was not the 'family business'.

"We're not a family institution, it never was, there are many members of the family who aren't involved in PBF, it's just been something that I, like my father and Simon, have had an interest in," he told WA Business News.

Simon Bedbrook said his family established the fund, and the board had always made decisions in a democratic fashion.

"PBF has strong ties to our family but we have external directors, an independent chairman and a management team for good corporate governance," he said.

While the Bedbrooks share Sir George's vision to reduce the incidence and impact of spinal cord injury in the community, they come from vastly different backgrounds - David works in the agricultural industry while Simon works for a financial services company and looks after clients' investments.

He created PBF after being frustrated by the lack of financial support available for patients, many of whom were institutionalised after being discharged from hospital.

"The idea was to have a mechanism to immediately pay out $100,000 to people who had suffered spinal cord injuries so they could do small things to make their lives easier, such as install ramps for wheel chairs in homes, to purchase beds, wheel chairs, etc," Simon Bedbrook said.

While PBF has retained a regional focus, with the head office remaining in Perth, it has grown to 70,000 paid members throughout WA and Queensland, forcing a recent restructuring at the management level.

The fund changed from having a national chief executive and a board of directors to its current structure of two executive directors and regional managers.

Simon Bedbrook and Grant White, a Queensland-based lawyer, are the executive directors, while the regional manager for WA is Warrick Welsh and for Queensland is Marshall Shaw.

"The changes have allowed staff to focus on growing memberships to provide cover for more people, grow out education programs in schools and overall, become more efficient," Simon said.

"We also aim to provide a good career opportunity for those people who have spinal cord injury and consequently we employ approximately 20 or so people in WA and Queensland who are in wheel chairs."