Thomas rebuilds his business in Perth

Alan Thomas faced a binary choice in 2015 to either wind down his business following the slowdown of activity in the company’s prime north-west market, or reinvent his building enterprise. 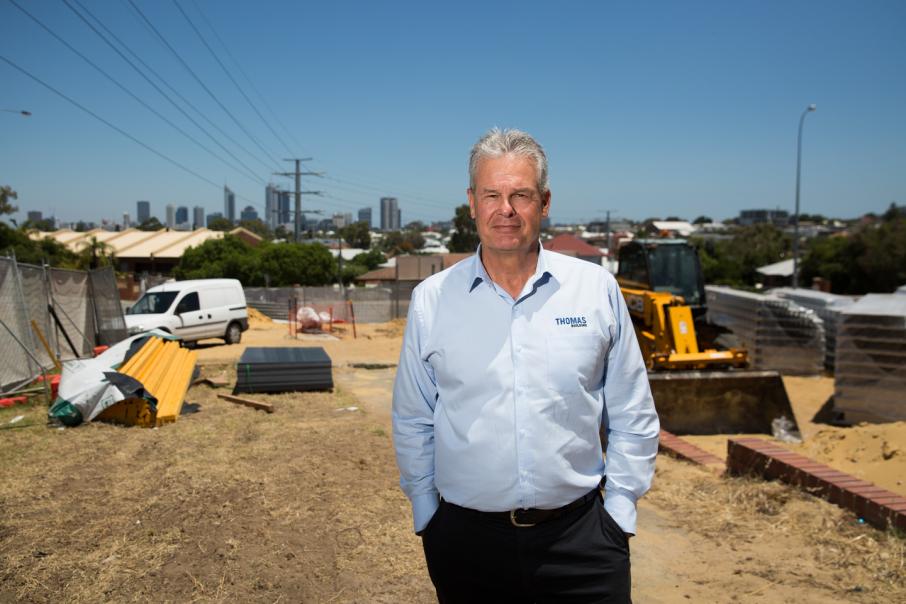 Alan Thomas says the business has a steady pipeline of work in Perth. Photo: Attila Csaszar

Alan Thomas faced a binary choice in 2015 to either wind down his business following the slowdown of activity in the company’s prime north-west market, or reinvent his building enterprise.

Thomas Building was founded in 2009 specialising in commercial and bulk housing projects in the regions, largely across the Pilbara, Broome and Gascoyne areas, with key clients including BHP Billiton and Rio Tinto.

“When the resource companies stopped spending money on infrastructure, our business basically stopped overnight; that was the field we played in,” Mr Thomas said.

“We thought ‘where do we go from here? Do we wind down or do we reinvent ourselves in additional markets’?

“We chose to reinvent ourselves in Perth.”

The problem with Perth, he said, was that Thomas Building was relatively unknown, with the exception of a few contacts Mr Thomas had from his 35 years in the industry.

Speaking to Business News late last year, Mr Thomas said it had taken the business more than two years to build up its brand in the local market, and now had a steady pipeline of work across the commercial, industrial and apartment sectors.

“Our guys went round to architects and developers in town knocking on doors,” he said.

“It has taken time for us to introduce ourselves, and to government departments.

“Now they’re starting to understand who we are, where we’ve come from and what our capabilities are.”

Current projects include the construction of three child care centres worth $5 million, two medical centres valued at $6 million, as well as four apartment and mixed-use complexes across the Perth metropolitan area totalling $32 million.

The business had also tapped into the schools market, recently winning a tender for extension works.

He said one of the builder’s largest projects since shifting to Perth involved securing the contract for bedding manufacturer Sealy, completing a 6,300 square metre Canning Vale facility last year.

“There’s a lot of opportunity out there, you just have to be mindful of how many tenders you’re capable of taking on,” he said.

“Any other builder will tell you it’s been pretty bloody tough over the last few years, you’ve just got to keep at it.

“I’ve seen the cycles before and that’s why I’ve maintained a presence in the regions.”

Mr Thomas said he was looking at growing his team in 2018.

“We’ve been through the challenge of reinventing ourselves and I can now see the window of opportunity where we’re going to bear the fruit of that pretty hard slog,” he said.