This is real vitality in the city

Voters need to remember that some of the most significant and positive changes in WA have come from governments doing less, not more. 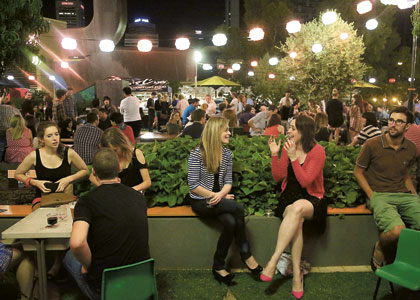 Voters need to remember that some of the most significant and positive changes in WA have come from governments doing less, not more.

IT’S interesting to stop and think about the changes that have profoundly shaped Western Australia over the past decade.

And then ask: which of these changes have been driven by government?

This question is particularly important in the context of the state election campaign.

This campaign, like most, has been dominated by competing and increasingly expensive promises from the sparring political parties.

In this election, the focus has been on public transport.

Labor has its MetroNet railway plan; the Liberals have the MAX light rail project.

The big-spending promises have taken precedence and, as WA Business News has said previously, goals like fiscal prudence and responsible debt management have unfortunately run a long second.

It also means that sensible decision making gets lost in the heat of the campaign.

For instance, a rail link to the airport has very quickly gone from an interesting long-term possibility that was under study to suddenly being a ‘must have’.

This is truly bizarre, especially when the Gateway roads project, which is designed to reduce congestion around the airport, is just getting started.

Gateway will be the largest and most expensive road project in the state’s history, yet already our politicians are competing to make even bigger promises for the airport.

Stepping back from the specifics of particular projects, voters need to be told that every spending promise has an opportunity cost.

It means less money for other projects, or more taxes, or more debt. That’s the reality, which ministers have to confront when they win power.

What if politicians focused instead on what they should not be doing?

Let’s start with regulations and the potential to remove them.

Liquor licensing is a prime example. The former Labor government introduced liquor licensing reforms that heralded the small bar revolution that has had a profound influence on Perth.

Retail trading is another example. The move to seven-day trading and extended hours trading has added more vibrancy and buzz to Perth than any government sponsored infrastructure project ever will.

It’s against this backdrop that we need to consider so-called city-building projects like Elizabeth Quay.

Whether we go with the Liberal’s plan or the City Gatekeepers plan that Labor favours, how much difference will it make to the city?

What are the drawcards that will bring in the crowds?

The built form is important but it isn’t everything.

The evolution of the Perth Cultural Centre in Northbridge is a smaller example that helps to inform this larger debate.

There have been big changes over the past few years in the Perth Cultural Centre; the gardens, the landscaping and the cafes have all made the area more appealing. But only a little.

And these attractive additions have had to compete with more questionable additions, like the giant, powerguzzling video screen that spews noise pollution into the area.

It’s a bit like visiting a friend’s house for a chat but having the television droning in the background.

But even the big, ugly video screen could be forgotten while the Fringe Festival was on. This event brought people and real vitality to Northbridge.

Almost every night, there were crowds of happy people of all ages and interests, attending myriad shows, having a drink at the open-air bar or just soaking up the atmosphere.

It was a scene that we rarely experience in Perth and enormous credit should go the entrepreneurs that have made this a big success - led by a former WA Business News 40under40 award winner Marcus Canning.

The election campaign has featured a few positives in this regard.

Both sides of politics have promised to further ease liquor licensing rules and the Liberals plan to take away some of the archaic rules restricting ‘small’ traders.

In particular, a ‘small’ retailer will be able to have 25 staff, up from 18 currently, and still be able to trade 24 hours a day, seven days a week.

Both of the major parties have made a few other token references to cutting red tape but the limited progress in the past does not augur well for the future.

What if they got more expansive and tackled the web of regulation and approvals that strangle the land development and building industries?

What if they tackled project approvals in the mining sector?

These are not new issues and they are crying out for attention.