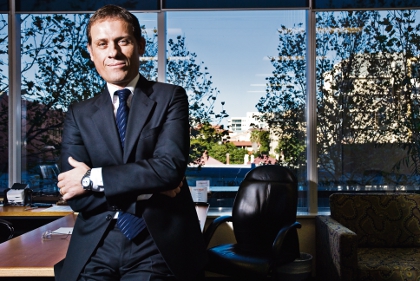 Online finance specialist ThinkSmart has taken a battering from shareholders on two fronts, with a sharp slump in its share price yesterday following a profit warning and a large protest vote against its long-term incentive scheme.

Speaking at the company’s annual general meeting yesterday chairman Ned Montarello said the company was operating in a challenging environment and it had become a lot more difficult in 2012.

As a consequence the break-even result it had anticipated in the half-year to December 2012 is now expected to be a loss.

“Due to the impact of the exceptionally difficult retail environment that now exists in Australia and the delayed completion of our new funding platform, we now anticipate reporting a loss for the first six months in the region of approximately $2 million,” Mr Montarello said.

“However, we expect to return to profit in the second half of the year leading to a reported full-year profit, albeit at a level materially lower than our earlier guidance.”

Mr Montarello also said delays in transitioning to a securitised funding model in the second quarter would negatively impact its profit for the half-year period by nearly $1 million.

But he said it would have no impact on the company’s financial results beyond the first half of 2012.

Mr Montarello said there had been a marked and well-published deterioration in the Australian market for electrical goods in the last few months.

“We are witnessing a significant level of deep discounting as retailers fight for market share,” Mr Montarello said.

“The effect has been profound and has resulted in negative trading update by major retailers in recent weeks, including from one of our key retail partners, JB Hi-Fi.

“Another of our key retailer partners, Dick Smith and we have witnessed a marked decline in volumes through the Dick Smith channel in 2012.

Mr Montarello said the company had witnessed a decline in both the volume and the average value of each transaction and as a result expect business sales from its Australian rental products to be 20% lower than that reported in 2011.

Meanwhile, its UK arm has delivered a pre-tax profit up 61% to $7 million after the launch of its Infinity B2C products, which increased its revenue by 20%

At the AGM, shareholders strongly supported the company's Remuneration Report and the election of director Nancy Fox.

However there were large protest votes agaist the re-election of director Steven Penglis and the approval of the company's long-term incentive plan.

The largest protest was reserved for a resolution allowing Mr Montarello to participate in the incentive plan.

ThinkSmart shares have recovered slightly after plunging by 8.5 cents to 19 cents yesterday; today they have gained 2 cents to 21 cents.