Things get cooking at Kitchen Warehouse

AS a former chef from the United Kingdom, Chris Murphy knows his way around the kitchen. 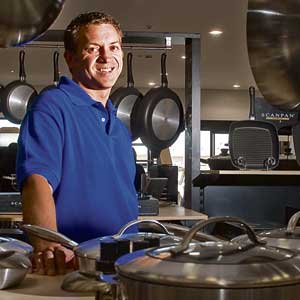 STEADY GROWTH-A former chef with an MBA. Chris Murphy is growing Kitchen Warehouse at his own pace

AS a former chef from the United Kingdom, Chris Murphy knows his way around the kitchen.

So when he decided to get into business for himself eight years ago, kitchenware and cookware company Kitchen Warehouse was a bit of a no-brainer.

Mr Murphy's father-in-law John started the business in 1992, operating small stores out of shopping centres, selling cookware through to gift and decorator ideas, covering all brands and price ranges from the top end to the more affordable products.

In its 16 years in Western Australia, Kitchen Warehouse has undergone a massive transformation and was recently named among BRW's top 100 fastest growing businesses in Australia.

The business opened it fifth store, in Cockburn, last week, adding to operations in Carousel, Melville, Midland and Osborne Park.

"As a WA-owned and operated company we were pretty excited about opening our fifth store and we're hoping that in time we can expand our brand a little more and maybe go to the east coast," Mr Murphy told WA Business News.

Mr Murphy, who has an MBA from the University of Western Australia, said relocating the business to bulky goods locations several years ago, out from the traditional shopping complex format, was a risky decision, but one that had paid off.

"Making the transformation to a large format was obviously a bit of a gamble at first, but this has proved to be a good move, allowing us to stock bigger ranges, create a better shopping environment and do cooking classes in-store," he said. "The question was, I suppose, would the customers still come to us, as we had previously relied on walk-ins to a degree?

"There was no passageway for us to use to guide us through in making the transformation to the larger bulky goods format because in the past we'd have customers who would wall past the stores in the shopping centre and take a look, so most of our customers were walk-ins.

"It wasn't so much a problem as it was reluctance I guess, because we were unsure about the level of customer awareness at our new bulky goods locations and whether our customers would know where we were and if they'd still come to us."

Mr Murphy said he and his father-in-law believed that, in order to successfully grow the business in the new larger format, customer service and loyalty would be paramount.

A customer loyalty card was also developed, which has allowed the business to track its clientele and form a database of customer details to facilitate future direct marketing initiatives.

"The new larger format has enabled the business to grow into new areas, like undertaking cooking classes for instance," Mr Murphy said.

"The business as a whole is growing strongly. We're not sure how far we can go yet, whether we want to pour more time and energy into another store, whether we go to the east coast and expand our brand, or even if we list next year.

"What I want to make sure is that with the stores we have, we get them going to the best we can do them, then make those decisions when we're confident in their success.''

Kitchen Warehouse is becoming a strong brand Australia-wide, with the small business a finalist in the past two years in the Australian Gifts & Homewares Association Homewares Store of the Year Award.