Theatre 180 and entertainment platform CinemaStage are bringing theatre to the cinema for a production of AB Facey’s A Fortunate Life. 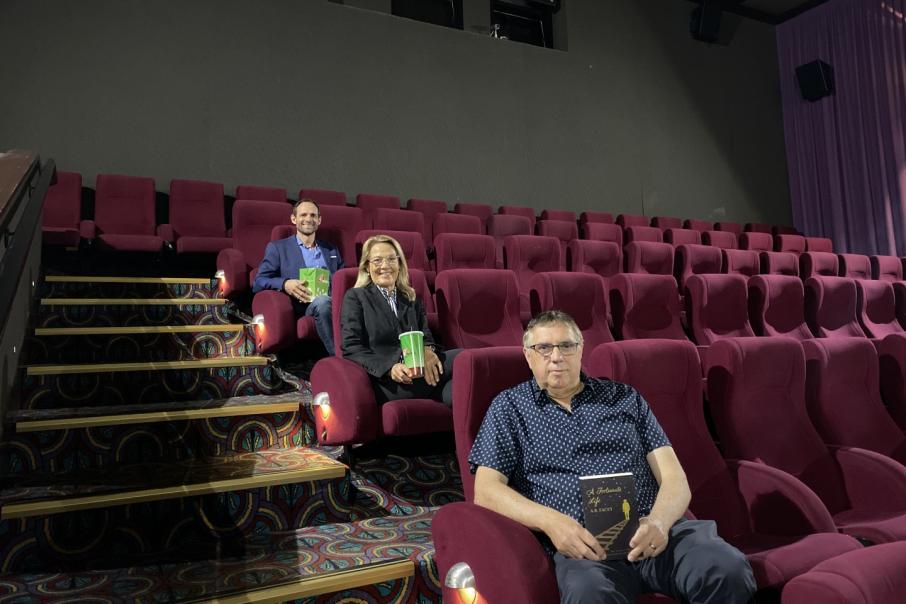 Stuart Halusz (rear), Theatre 180 chair Susan Fleming and Ron Siemiginowski are some of the brains behind the production. Photo: Sophia Fleming

Theatre 180 and entertainment platform CinemaStage are bringing theatre to the cinema for a production of AB Facey’s A Fortunate Life.

The production will involve live actors performing in a movie theatre, using the cinema screen and sound system to provide a backdrop to the narrative.

Theatre 180 artistic director Stuart Halusz said he combined the two mediums because it had never been done before.

“It did pose certain challenges that needed to be overcome because theatre and film work quite differently in many ways.

“However, we have discovered that they work beautifully well together to bring that immediacy of theatre and energetic exchange that you get live with the visual impact of cinema.”

Mr Halusz said he had wanted to make A Fortunate Life into a play ever since reading it in his youth, but had struggled to find the right vehicle.

“When opportunities arise you take them and so we did have this opportunity where Ron has these regional cinemas and he’s had the idea for many years,” he said.

“[Mr Siemiginowski had always said] there must be another way we can use this cinema and the screen and all of the technology rather than just screening the Hollywood films and everything else that comes along.”

Having worked as a professional pianist, Mr Siemiginowski said the idea emerged from the fact his business was in cinema and his passion was music.

“It’s a combination between the two and it seems to work extremely well, so we are thrilled with the response and how it looks.”

Mr Siemiginowski, who is also the production’s composer, is funding a majority of the project.

“In true culturally philanthropic ways he [Mr Siemiginowski] is supporting the production financially and allowing it to happen,” Mr Halusz said.

“There is a lot of in-kind support both from Theatre 180, from our AV producers Green Man Media.”

The production will be shown in Ace Cinemas in Midland, as well as in theatres operated by Orana Cinemas in Albany, Busselton and Geraldton in February and March.

Mr Halusz said Theatre 180 was hoping to take the production nationally, internationally, and apply for state funding to perform in smaller regional towns that might not have a theatre.

After 25 years in the business, Agelink Theatre rebranded as Theatre 180 in 2019 to tap in to a broader audience.

“A lot of our early shows were based around seniors’ memories and recollections and reminisces, and a lot of our work was funded by government,” Mr Halusz said.

“We got to a point with Agelink where we felt we couldn’t take it any further.”

The company applied for organisational funding through the state government to become a provider of main stage and studio productions and education alongside the work Agelink was doing.

“At the moment we are sitting in a space where we are working towards building up all three of those pillars and taking the company, hopefully, to a wider audience,” Mr Halusz said.