The world comes to Roleystone for drums 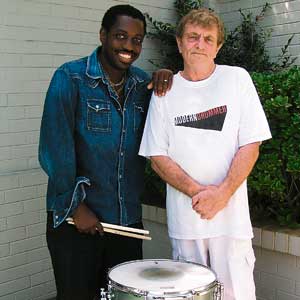 Since he began creating kits in his Roleystone garage in the late 1970s, Chris Brady has never adopted established manufacturing techniques with all of his "inventions", which are developed around the idea of how a drum should sound.

His drums feature on the recordings of some of the world's best-known musicians - from Bryan Adams to Jimmy Barnes, Pearl Jam and Jamiroquai, Ozzy Osbourne, John Mayer and Steve Vai.

"Someone asked me back then to make them a drum out of a solid wood piece, which is a pretty hard thing to do, so that's how I got involved in that," Mr Brady told WA Business News.

"I worked out of my garage for years and back then the bands used to come out to Roleystone to buy my stuff, it's really weird."

Brady Drums is a custom drum manufacturer and, unlike most other small drum companies, produces its own shells.

Part of Mr Brady's philosophy is sourcing the timber from local bushland, a competitive difference as most other companies buy their drum shells from a large drum shell manufacturer, made out of cross laminated maple or birch in a steam bending technique. Mr Brady said the drums for these companies were only finished and assembled.

He said the most challenging part of drum making is the crafting of the drum shell, so the Brady brand is differentiated because the unique sound of the kit is created by the crafting of a unique shell.

The small business does not use large machinery or computerised technology, with all drums handcrafted using simple wood tools and small machines, ensuring one-drum-at-the-time attention to detail.

"The biggest problem we have is currency fluctuations. When the financial crisis hit, we were in a bad way as far as America was concerned," Mr Brady said.

"Because we hand-make things - and the way we do them our profit margins are very small - the drums are fairly expensive.

"So if you want to get your costs down, you have to start manufacturing overseas; that's exactly what everybody else has done.

"So how do I deal with the currency fluctuations? That's easy, well it's not easy, but because we are so small the fact of the matter is I can turn my attention to Europe, which is much stronger, and pick up any sales I would lose from America in places like Germany."

Industry observers would vouch for Mr Brady's legendary status in the drum scene, with his brand recognised among professional musicians worldwide.

Despite the brand awareness, Mr Brady said operating out of WA incurred huge freight costs, which meant penetrating other overseas markets was a challenge.

"My opposition, they make the equivalent product to mine, well not equivalent but near top of the line, but its made in Taiwan, so it's delivered to their factory in America for, like, $115; that's all the profit margin and everything in it. My freight bill is $150 and I haven't even made it," he said.

"My freight is bigger than all of their manufacturing costs so they're making a profit and I've still got a freight deficit to deal with before I even get around to the rest of the expenses.

"I've maintained where we are and people have in their minds that we're this huge drum company, but we're not, there are only four of five people I employ.

Mr Brady concedes that the business does not operate at its full potential and that the Australian market has been neglected over the years.

"Most companies don't think the way I do, they think there's massive sales potential in Europe so we better put a bloke on over there, but I'm not like that," he said.

"I've had a choice the whole time; look, my name is probably worth a whole lot of money around the world if I wanted to sell it or wanted to go overseas. I mean the easiest thing for me now would be to just sit back and have them produced in Taiwan in their thousands with my name on it and people would buy it for the name, but I would feel that I let down the whole thing I started out for."