The soft side of capitalism has to be on display 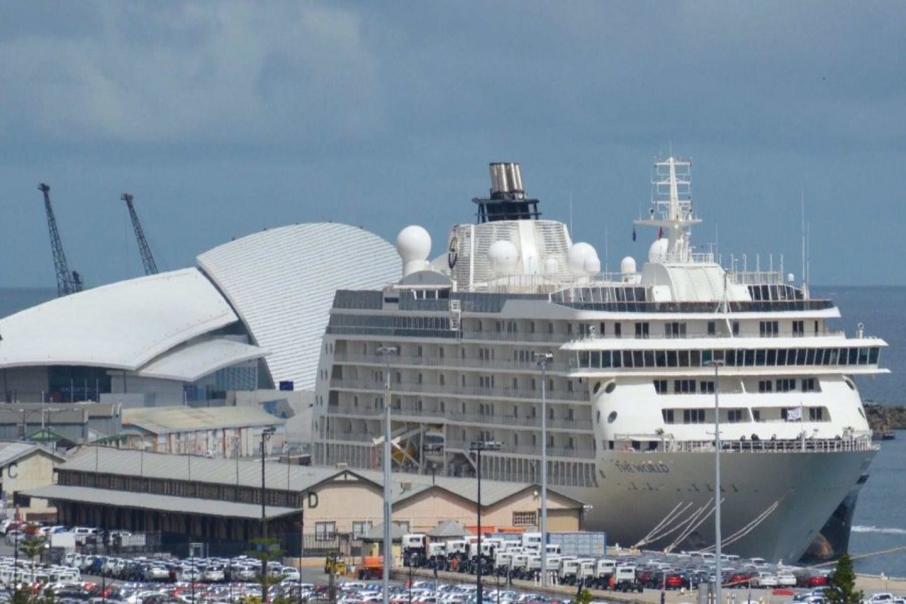 Ultra-wealthy cruising option The World disgorged at Fremantle and is not sitting empty off the coast. Source: Fremantleshippingnews.com.au

This is a big moment for capitalism in democracies, especially Australia, which sits somewhere between the genuine version of the US and virtual socialism across big parts of Europe.

Somehow Prime Minister Scott Morrison must navigate a passage that gets Australia out of the pandemic crisis as quickly as possible without a legacy of recrimination for medicine too harsh or a whole bunch of new crutches in the form of permanent state support.

The major task is ensuring households can salvage enough from the crisis to keep intact, especially if the recovery is slow and jobs are hard to come by for more than a few months. In the end we are in a democracy, and if too many people are let down they will reject the system that failed them.

In my view, the best way to achieve that is to keep as many businesses as possible on life support, allowing them to come out of their coma and re-employ their staff when the danger recedes. It is essentially using capitalist mechanisms to keep the system we have as intact as possible. Clearly the prime minister has recognised that with his $130 billion JobKeeper package.

Notwithstanding the huge dollars and many experts the government can bring to bear on this problem, to save the furniture – most household wealth – still requires the cooperation of three key parts of the economy: the banks, the landlords and the utilities.

Thankfully, the first and most important of those is the banks. On notice after the Financial Services Royal Commission, our big four banks are keen to make amends, are relatively well capitalised, and have a great deal of federal support funds flowing through them. Furthermore, it is their decisions that will be key for many companies and individuals because they provide direct funds and also often fund their landlords.

Utilities ought not be an issue, and news today from Premier Mark McGowan indicates that. Again, there are a handful of major providers who often in state hands or are otherwise highly regulated. It is not hard to imagine governments using a big stick to make sure they provide relief to consumers and business when it comes to energy, water, telecommunications and other essentials.

By comparison property owners are a significantly less homogeneous group. While commercial property has its big players in various segments such as shopping centres, CBD office or industrial estates, even those segments tend to have more major players in each than there are banks.

Go beneath the surface to suburban or regional owners across those segments (including lower grade CBD office) and you are looking at thousands of landlords, largely unregulated, with all manner of different circumstances. In many cases, landlords are family members or self-managed superannuation funds; in others they are just wealthy people who have found the safest way to safely earn an income is to invest in property.

The biggest win the government can have at the moment is working out a fair and reasonable package to manage a three- to six-month rent holiday for businesses and residential tenants and a just compensation outcome for those that own the accommodation.

I am pretty certain the prime minister’s vague call to these different sectors of the economy to work it out amongst themselves is not going to be a solution. But Mr Morrison and his crisis cabinet need time to figure out the details, so flagging it up to business is fair and reasonable and pro-capitalist – for the time being.

Luckily the government can control the banks, so that is a big plus. Taking the pressure off landlord mortgages or borrowing costs in other businesses they own, will make this much easier.

In the end, this will be the critical step to softening the blow to the economy and keeping many businesses from potential ruin.

Using staggering interventionist policies, for a very limited time, is clever policy in order to hibernate large parts of the economy and leave it ready to lift us out of recession when the pandemic threat has gone.

As history has so far proved, capitalism is the best system we have. I believe it will prove especially strong in the recovery period after the pandemic. We don’t need it held back by lingering socialist concepts introduced in haste, but we also have to intervene sufficiently to ensure people don’t look for an alternative.

The federal government needs to get that balance right. It is a very challenging time in that regard.

I was intrigued to discover that ultra-wealthy cruise ship The World, which is really a floating luxury apartment block owned by about 150 of the globe’s richest people, has been stationed off Fremantle riding out the pandemic.

Unlike the typical cruise ships that have been appealing for help from Western Australian authorities, I understand The World let the last of its passengers off at Fremantle a couple of weeks ago and is sitting out the virus crisis without it becoming a petri dish for disease spread as so many other vessels have.

I had always assumed that if there was a global crisis The World and similar ships would be the safe havens for the wealthy, able to sustain life for months and avoid the risks of movement across borders that can stop flight for even the super-rich.

Instead, as we have discovered, no matter how luxurious a ship may be, it is still close quarters living for many who can afford to stay at home with comparatively big boundaries to keep the rest of the world at bay.

Speaking of cruise ships, I appreciate the difficulty the state government had navigating the troubled waters of ocean liners appealing for assistance due to COVID-19 spread on board.

While Premier Mark McGowan has to manage the fears of voters and the fact that just a few sick passengers could cause further mayhem here, I do believe we need to be careful about the language we use.

In the end, Western Australia wants to be a destination for cruise ships and managing this crisis without being too harsh or selfish in the way we express ourselves is critical.

Our history is full of stories of the grateful repaying their saviours one hundredfold. They are parables worth remembering.

In the same vein, people in WA’s regions ought to be careful in their rejection of both regular holiday makers and itinerant travellers during this tough time.

Regional communities are often heavily reliant on seasonal and occasional tourists. They variously keep property prices up, pay rates, create the demand for many services and, in the case of backpackers, often do work that locals won’t.

While I understand the fear in many communities, both from the virus reaching the vulnerable and the possibility of supplies and services (notably in health) being stretched, it is wrong to suggest that anyone ought to be forced to leave or told not to come.

For some holiday-home owners, their property will have been purchased with this very situation in mind. For travellers, be they grey nomads or backpackers, their options are limited.

As with people in the city, the key is for the vulnerable to take social distancing seriously and those providing services such as shops to be creative, offering takeaway and home delivery to reduce the chance of infection spreading.

Creativity ought to over-ride fear.

Finally for today, we are going to need to focus on the most vulnerable in the very near future. While COVID-19 does affect some kids and younger people, it does seem very discriminatory.

A blanket approach was needed to rein in the spread before, we hope, it ran wild. But once it is in check, there will be a serious case to make regarding keeping isolated the elderly and those most at risk due to immunity or respiratory issues.

A staged return to normality based on age and health risks seems like the most sensible way to get our economy moving without the threat of the pandemic returning.

Some might suggest we missed that stage during the move from normal to lockdown, but that’s easy in hindsight and may have been harder to achieve than the wider approach we have taken. As restrictions ease sometime in the coming weeks, it ought to be better understood that some people will need to remain protected for longer as we test the boundaries of this disease.