The premier and the tycoon

His light may have only shone briefly, but Alan Bond’s legacy remains etched in WA’s collective political and corporate memory. 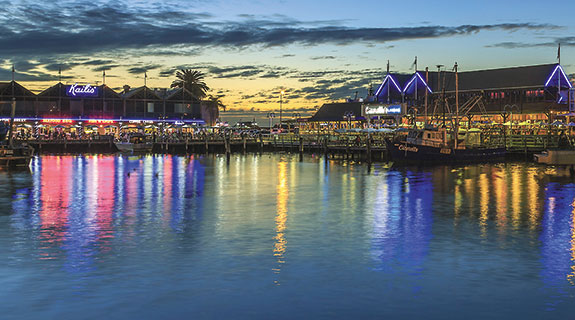 ON THE MAP: Fremantle got a makeover for the America’s Cup defence, after Alan Bond’s Australia II won the old mug in 1983.

His light may have only shone briefly, but Alan Bond’s legacy remains etched in WA’s collective political and corporate memory.

THE death of controversial business tycoon Alan Bond came within days of the release of state cabinet papers from 1984, which showed the early stages of the close links between the flamboyant entrepreneur and the Labor government led by (then) youthful premier Brian Burke.

The papers indicated the seeds being sown which, while apparently beneficial to both sides at the time, would eventually embroil the state in significant losses and lead to a bitter split between Mr Burke’s successor, Peter Dowding, and Mr Bond.

That was after Mr Bond had praised Mr Dowding in the lead up to the 1989 state election, comparing the leadership qualities of the new Labor premier favourably with those of the British prime minister, Margaret Thatcher.

Mr Bond had already threatened Liberal Leader Barry MacKinnon that he would do all in his power to unseat him, after Mr MacKinnon rejected a demand to support a government guarantee of $150 million to help prop up Laurie Connell’s Rothwells ‘bank’ after the 1987 stock market crash. Mr MacKinnon said later it was one of his best decisions.

It had been a euphoric five years for Mr Bond, the start of which coincided with the election of Mr Burke’s Labor government in February 1983.

The entrepreneurial property developer had struggled to gain acceptance within the Perth business establishment during the 1970s. Considered an upstart, he failed at his first attempt to become a Perth City councillor (always a coveted position for the property minded).

But when Mr Burke was sworn in as premier on February 25 1983 – his 36th birthday – the mutually beneficial association between the businessman and the new business-oriented Labor government developed quickly.

One of Mr Bond’s companies was contracted to build Bunbury’s first tall office block – the ‘Bunbury Tower’ – and the government leased the entire building. It also agreed to buy Mr Bond’s 5 per cent share in the Argyle diamond project.

It was alleged that the price was inflated, although the government was later to claim that it made a profit on the deal when it sold units in a public float. Coincidentally, both parties to the sale paid a commission to Mr Connell, although cabinet ministers were kept in the dark.

Mr Bond’s big break came later in 1983 when his yacht, Australia II, won the America’s Cup and he was a national hero. He could do no wrong. The slogan on car licence plates in Western Australia changed form ‘State of Excitement’ to ‘Home of the America’s Cup’.

The 1984 budget papers documented approval, against fierce local opposition, for the building of the 25-storey Observation City Hotel on the beachfront at Scarborough. It was one of several ‘out there’ Bond projects. He was still pushing the envelope but now the decision makers were on side (unlike the 1970s).

And Mr Bond was also one of the coterie of Perth businessmen, along with Mr Connell, Multiplex’s John Roberts, Kevin Parry, Sir James McCusker, Rod Evans, Kevin Parry, Dennis Cullity, John Horgan, Mick Michael and Sir Ernest Lee-Steere, to become vice-patrons of the John Curtin Foundation, to raise funds for activities linked with the Labor Party. It was one of Mr Burke’s greatest coups.

But the entrepreneur’s links with Mr Burke’s successor, Mr Dowding, were not nearly so tranquil, mainly because of the persistent liquidity problems for Mr Connell’s Rothwells. Mr Bond had masterminded the Rothwells ‘rescue’ after the stock market crash in October 1987.

At one stage, Mr Dowding refused to see Mr Bond when the tycoon arrived, unannounced, at the premier’s office at 197 St Georges Terrace. After that, Mr Dowding became fair game in The West Australian newspaper, then owned – briefly – by Mr Bond.

The 1990s were not good for the entrepreneur. In 1992 he was declared bankrupt with personal debts of $1.8 billion. He served two stints in jail and I was in the court in 1997 when he was jailed again, this time for seven years for siphoning off $1.2 billion from Bell Resources, which he had bought in a fire sale from Robert Holmes a Court. It was Australia’s biggest corporate fraud.

I was also waiting outside the Karnet prison farm in 2000 when he was released – a pale imitation of his former self.

Mr Bond’s ascension to influence coincided with the election of a new Labor government led by a youthful and impressionable premier with his own entrepreneurial side. It was a heady brew, which would eventually cost WA taxpayers hundreds of millions of dollars.