The portal to a new world of work

Technology has enabled workers of all ages to challenge the workplace orthodoxy. 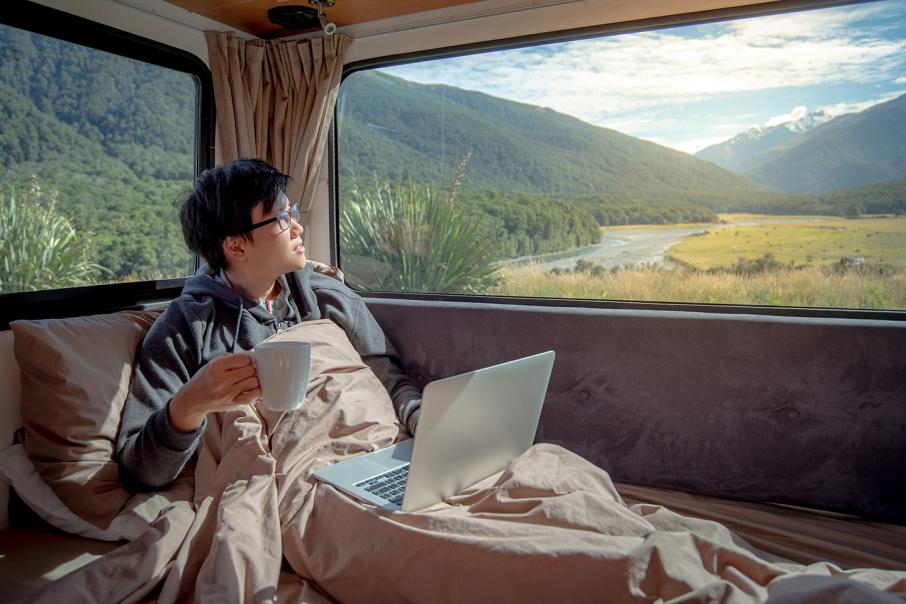 For digital nomads, ‘taking your work with you’ is a lifestyle choice. Photo: Stockphoto

Technology has enabled workers of all ages to challenge the workplace orthodoxy.

News reports quoting a statistic or study on the changing nature of employment and the modern workplace are common fodder across all forms of media these days.

Between automation and underemployment, the way we approach and structure work is rapidly changing.

Among the more pressing trends is the casualisation of the workforce – the emergence of the ‘gig economy’ and the rise of freelancing. Recent research shows that for the years 2014-15, job marketplace platforms such as Airtasker and Upwork enabled up to 4.1 million Australians, or about 32 per cent of the workforce, to engage in freelance work.

This trend is set to continue, with the US expecting that the majority of its workforce will include freelance work as part of their income by 2027.

However, freelancing is not all Uber rides and outsourced Ikea construction.

Often it is skilled work being undertaken by professionals who are seeking the freedom, flexibility and empowerment of being masters over their own work.

Platforms such as Expert360 are connecting aspiring freelancers with companies large and small, seeking to fill capability or talent gaps in their organisations.

According to the ‘Freelancing in Australia: 2015’ study, freelancing is not just for millennials, either; 17 per cent of current freelancers are over the age of 55, and more than 36 per cent hold a university degree or higher.

Often posting enticing images on Facebook or Instagram (perhaps a laptop by the pool, or by the beach), digital nomads are freelancers on the road – technology-enabled workers mixing business-work with holidaying.

In a world where our workplace is increasingly remote, digital, and distributed, they are a new class of employee or business owner.

Not surprisingly, there is an influx of digital nomads at holiday destinations with high-purchasing power for Australians.

There are more than 10 co-working spaces now on offer in Bali alone, with nomads mixing the surf of Canggu with their workday.

Further abroad, Barcelona, Medellin and Berlin are all becoming hotspots for digital nomads.

Entire industries are being created around the emergence of the digital nomad, and new social constructions are being born as the result of the mixture of work and play.

Global co-working juggernaut WeWork now services digital nomads and flexible workers in more than 270 locations worldwide, valuing it at a lofty $US20 billion.

Closer to home, Spacecubed, has expanded its footprint to more than 5,000 square metres of co-working space in the Perth CBD, servicing entrepreneurs, organisations and travellers.

The concept of co-living, which many people are happy to leave behind after their university days, is also on the rise, thanks to the digital nomads.

Companies such as Roam are tapping into the rise of remote work by combining community and co-working with boutique accommodation in desirable holiday locations.

As the deconstruction of the traditional nine-to-five workday continues, organisations will need to respond and adapt.

Employees are demanding greater flexibility, and freedom is becoming the employee value proposition of choice.

Job platform Indeed found searches for job ads promoting ‘flexibility’ more than doubled in the past five years, and this trend is set to continue.

While most companies won’t be able to immediately offer the depth of flexibility afforded to most digital nomads, the trend is still apparent.

A desirable workplace is not just about great culture or clear roles and responsibilities, it is about the freedom and empowerment afforded to its workers and the flexibility to more seamlessly integrate work and play in their lives.

The digital nomad trend also provides an opportunity for businesses in remote cities such as Perth, as it allows access to leading talent through remote freelancing arrangements without hefty relocation or travel costs.

Outside the immediate impact for organisations, Western Australia has a unique opportunity to leverage its natural and cultural assets and attract digital nomads.

While it may not offer travellers the purchasing power of South-East Asia, WA does have stunning beaches, a relaxed capital city and a growing and vibrant technology community.

Its Hot Desq program encourages leading entrepreneurs and technologists to relocate to Queensland in exchange for up to $100,000.

Further abroad, Estonia launched the world’s first digital nomad visa this week in a bid to establish itself as Europe’s epicentre for remote workers.

While the dream of working on idyllic beaches may remain elusive for many of us, the rise of the digital nomad and the trend toward freelancing provides both opportunity and challenges.

Personally and professionally, we need to ask ourselves what life will look like in a world where work is increasingly flexible, global and remote.