The eyes have it at Country Arts forum 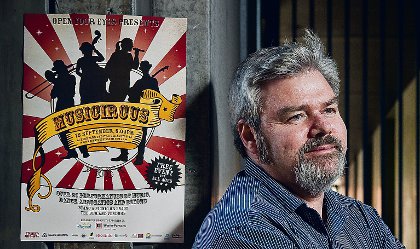 ATLAS Iron chief executive David Flanagan has called for greater mutual support between the arts and business communities, and for arts bodies to adopt a business-like approach.

“Industry’s support for the arts, both in monetary and personnel terms, is significant. But there is currently a window of opportunity – as we in business are fond of saying – for the mining industry and the arts to forge a closer, more mutually beneficial relationship,” Mr Flanagan said.

“For those in the arts, I believe that challenge is about being more in ‘the business of the arts’.”

Growing interest in the arts, from the business sector in particular, will be one of the main focuses of Country Arts WA’s 2011 Open Your Eyes convention this month.

Country Arts WA is membership-based not for profit which supports arts and cultural development in regional WA by delivering arts development and touring programs on behalf of the state and federal governments.

Mr Flanagan’s comments, made in response to a request by CAWA, will be used to drive discussion at the forum.

He suggested the arts industry should focus on its market in regional areas, tailoring its product or service offering to each community, as a business would.

“One size does not fit all. In your case, what is suitable for the western suburbs of Perth and the eastern suburbs of Sydney is often going to be vastly different from what is required in Port Hedland, Kalgoorlie or the Wheatbelt,” Mr Flanagan said.

He added that the increasing presence of miners in regional communities, whether or not they are fly-in, fly-out has increased the demand for culturally rich communities.

“Workers and their families will not accept the barren communities which were all too often a hallmark of life in a mining town,” he said.

Mr Flanagan also called for arts communities to support the commercial businesses that support them.

“The resources industry needs to help foster friends in the arts if it is to play a greater role in society,” he said.

“But equally, I say to those in the business of the arts, perhaps you too could extend a warmer hand to an industry which has been allowed to be depicted as the antithesis of what you supposedly stand for.

“I believe it would be a wonderful gesture, and ultimately in their own interests too, if those in the business of the arts were to, on occasions show some public support for the resources industry, particularly as it confronts Canberra in some bruising battles.”

Mr Flanagan was one of nine representatives from the business, community and education sectors asked by CAWA to upload a paper for public comment and discussion, with these ‘speeches’ forming the basis of debate topics at the convention in Geraldton later in the month.

Sean Doran was commissioned to direct the convention this year and set the debate themes, including: how the arts interacts with technology, democracy and social change; suicide and mental wellbeing; and Aboriginal culture, guilt, sovereignty and sprituality.

The outcome of the discussions will be a set of recommendations to parliament in the form of ‘Manifesto 2029’.

“We are trying to say that regional arts can be better placed at the centre of regional communities and make them better places to live by 2029,” Mr MacPhail said.

CAWA hopes the recommendations will be received well by all political parties when it presents its manifesto to parliament.

“This isn’t about complaining to the government or asking for more money or anything like that, it is just about saying ‘this is the area of work that we deal in, these are the people in this area day-in, day-out in the regions and they want to gather their views and put them together and try and say to the government this is where we would like to head’,” Mr MacPhail told WA Business News.

Mr MacPhail said there was a big opportunity for the Department of Culture and the Arts to strengthen the position of regional arts in WA with a shift in focus to the regions.