The second of four extracts from Peter Kennedy’s new book examines the Rothwells rescue and the murky links between WA business and politics. 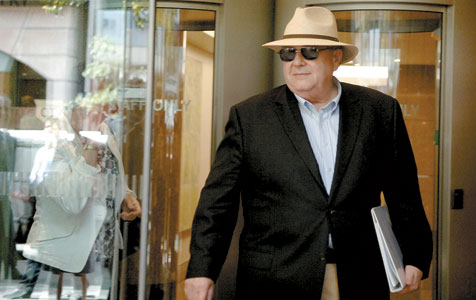 I was part of a media contingent in October 1987 that joined premier Brian Burke on a flight to Bunbury, where he was to campaign for Labor's candidate in a by-election for the South West province in the Legislative Council.

It was a relaxed premier who entertained the media with some corny jokes on the flight south.

But there were frowns all round after October 20, on the eve of the poll, when shares on the Australian stock exchange slumped following a crash on Wall Street.

Nervousness abounded, and late in the week there were reports of depositors keen to withdraw their savings in financial institutions, including Laurie Connell's Rothwells 'bank' in Allendale Square. But there was no hint of what was to follow.

The Liberal candidate, Barry House, won the by-election – Burke's charm could not work electoral miracles. I recall compiling my story on the result for The West Australian the next day, waiting for the premier's input. A news conference set for early afternoon was pushed back twice with no explanation.

Then it became clear what the real story was. Labor's by-election defeat had been swept away by the 'Rothwells rescue'. At the news conference, Burke announced that a who's who of Australian business had done a whip around to pump money into Rothwells, giving it the liquidity to reassure depositors and head off a 'run'.

They included Kerry Packer, Larry Adler, John Elliott, Sir Tristan Antico and Ron Brierley, as well as Alan Bond, Robert Holmes a Court, John Roberts, and Dallas Dempster. Burke added that the government had provided a $150 million guarantee (he later told me it was over $180 million), which would "never be drawn on".

It emerged that several cabinet ministers had been called in earlier that day to discuss how the government should respond to the Connell problem, and key staff members assigned to undertake a quick precis of the Rothwells books. The opposition was also called on for support.

Opposition leader Barry MacKinnon first heard of the Rothwells plight from the Liberal Party's finance committee chairman, Tony Oates, who was a member of Bonds' 'inner cabinet', on the night of the by-election. Oates briefed him in more detail next morning.

"Then Burkie phoned me," MacKinnon said. "He said that Rothwells was in trouble and likely to go under unless the government supported it. And that support depended on 'you backing us'. His message was 'you must support it. If you don't we are stuffed'. There were no details, no paperwork, nor did I ask for it."

Alan Bond, who was coordinating the corporate 'rescue', then requested a meeting at his Dalkeith house.

"Bill, Richard and I went there and he gave us the hard sell, saying business was on-side." MacKinnon said. "We asked how much local government money was in Rothwells and he said 'not much'. But the pressure for us to support the rescue was on, and he said, along these lines: 'I am a Lib, you should support it'. Richard and Bill said it was my decision and they would back me whichever way I went. But they didn't think support was appropriate."

MacKinnon said he was "pretty sure" he then told Burke the opposition would not support the state guarantee, and that Burke had said that meant Rothwells would go under.

"That evening the government said it was supporting the 'rescue' even though I said 'no'. It was one of the best decisions I ever made. Remember I was fighting both Burke and Bond, who was building influence as a media owner."

MacKinnon said there was a sequel a day or two later when he arrived at the Weld Club in Barrack Street. "The bloke on the door said there was a call for me from Alan Bond. Bond abused me in the most colourful language imaginable, and said he would work to remove me as Liberal leader. We were pretty 'lonely' at the time, and it was a very tough day. I thought Bond used to be ok. When Alistair McAlpine came to Perth we would often have dinner at the Weld Club."

Sydney-based Labor Party powerbroker Graham Richardson, who had initially supported Burke – ahead of Paul Keating – as a successor to Bob Hawke, said the Rothwells rescue was the cause of his "fall from grace".

"I don't think Brian's reputation recovered from that. He was too close to Connell. Everyone knew that. And when you are too close and the other person goes bad, everyone suffers."