The Precinct coming to Canning Bridge 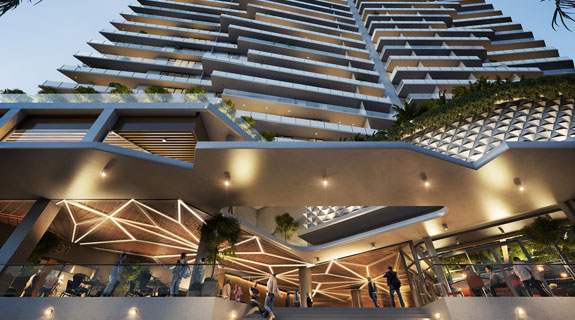 The Precinct will have a significant hospitality aspect on the lower floors. Image: Norup + Wilson

Construction on a 22-storey tower near Canning Bridge will start in March next year, after developer Norup + Wilson was given the green light to proceed by planning authorities.

The new building, known as The Precinct, follows Norup + Wilson completing its Precinct on Ogilvie project, a $40 million, 34-apartment building on Ogilvie Road, which was built by Diploma Group.

The metropolitan central development assessment panel today gave its nod to The Precinct, which will be built on the corner of Canning Highway and Sleat Road in Mount Pleasant.

According to DAP documents, it will have a base construction cost of around $91 million.

Norup + Wilson director John Norup said the building, which will comprise 199 apartments, would be a real game-changer for the area’s amenity, with 11 food and beverage tenancies planned for its lower floors.

Mr Wilson said the top floor floors would comprise of 25 Skyhomes, which would have exclusive access to a rooftop lounge, incorporating a dining room, lounge, wine storage and an outdoor deck with river views.

Other facilities in the building include an indoor gym, running track, swimming pool, steam room and Teppenyaki barbecues.

Mr Norup said there had already been enormous interest in the development, which was designed by architecture firm Woods Bagot.

“This will become a landmark building not just for its beauty in design, but for the exemplary finishes and facilities provided,” Mr Norup said.

Mr Norup said a contractor would be appointed for forward works in coming weeks, while at the same time tenders will be launched for the main construction contract.

The Precinct is one of two landmark developments proposed for Canning Bridge, with developer Stirling Capital winning approval for its $80 million, 232-apartment project on Kishorn and Ogilvie Roads around a month ago.

Stirling Capital’s plan is to build a two-tower luxury development, which would be built in two stages.

The McDonald Jones Architects-designed towers will both be 20 storeys.

Stirling Capital will launch sales for the development early next year, with the first stage scheduled to be complete by 2018.