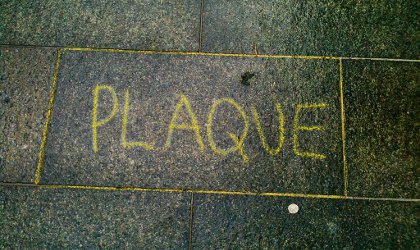 The simple things in life are often the best.

The Note did not invent this expression but we carry it in our collective heads at all times, especially when we are walking down St Georges Terrace brushing shoulders with the suits that run commerce in our great state.

It was in this dreamy state that one of our operatives encountered a stretch of seemingly fresh-laid pavement where the word “plaque” had been chalked at various equidistant points.

Aware that normally the footpath in these parts is embedded with metal plates cast with the names of the state’s fathers and mothers, our interest was piqued.

Had the City of Perth made a canny cost-saving decision? What with metal prices these days, chalk might be a good option, even with the cost of labour required for daily re-application.

Presumably, the effort pictured was a test.

Not so, apparently the original plaques were worn out from shoe leather and were due for replacement as the streetscapes were being spruced up for CHOGM.

Speaking of simple, Chevron might regret the ease with which its print advertising campaign can be parodied, thanks to the intersecting technological joys of the internet and publishing software.

According to exhaustive testing by The Note’s most online-savvy operative, it was easier to find joke versions of the big oil major’s ads than the real ones.

A warning though, these ads should not be viewed by anyone who has a vested interest in the oil and gas sector – which is an awful lot of us (outside of Broome, of course, where they haven’t realised it yet).

There are a range of views expressed at the Punk Chevron Ad Contest but the one we liked best went along the lines of: “At least we’re not BP”.