Driving up the Great Northern Hwy from Midland to Port Hedland, you can’t help but marvel at the number of trucks on the road – and be concerned about what lies ahead for wheatbelt communities after the closure of the ‘tier 3’ rail lines. 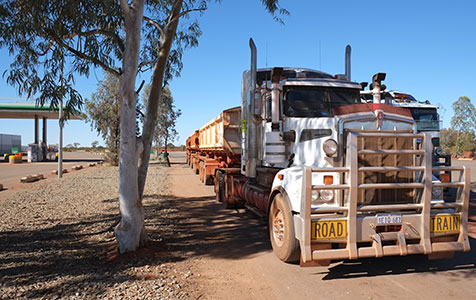 Driving up the Great Northern Hwy from Midland to Port Hedland, you can’t help but marvel at the number of trucks on the road – and be concerned about what lies ahead for wheatbelt communities after the closure of the ‘tier 3’ rail lines.

Most Perth residents will already be familiar with the congested road conditions through the Swan Valley, where big trucks compete with tourists and locals for space on the highway. Further north, the highway is less congested but in much worse condition. The vehicle suspension was sorely tested as we drove though the northern wheatbelt, where there was nothing ‘great’ about the highway.

Oversize loads carrying mining equipment were a regular fixture. We passed many, and luckily did not get stuck behind any of them. Other motorists heading south were not so lucky.

Judging by the large number of Linfox trucks we saw, the WA market must be making a big contribution to Lindsay Fox’s business fortune. Other operators like Toll Group and Regal Transport were also spotted but nothing like the numbers for Linfox.

Mining operations are scattered along the Great Northern Hwy – like Extension Hill in the Mid West, Doray Minerals’ Andy Well gold mine, right next to the highway just north of Meekatharra, Sandfire Resources’ Degrussa copper mine and further north the Plutonic gold mine.

The number of heavy trucks on the highway escalated dramatically after we drove through Newman and into the Pilbara’s iron ore mining heartland. We stopped at Auski road house and were amazed by the number of four-trailer road trains taking loads of iron ore to Port Hedland.

Travellers who camp near the highway learn that these road trains do not stop at sunset. They appear to run 24/7, suggesting no slowdown in the iron ore trade to Asia.

Patience Bulk Haulage, owned by Geraldton’s Patience family, is by far the biggest operator, and Jamieson Transport is also doing well. The biggest customer in these parts is Perth company Mineral Resources, which has two mines in the east Pilbara. About half way to Port Hedland, the number of trucks increased again after we passed Atlas Iron’s Wodgina mine, which is serviced by McAleese Transport.

By Pilbara standards, Mineral Resources and Atlas Iron are small players. While Rio Tinto, BHP Billiton and Fortescue Metals Group collectively haul about 700 million tonnes of iron ore per year to port via their own rail lines, the small miners haul about 10 million tonnes per year via road. That is more than enough to have a big impact on the roads.

The state’s south west will get a similar experience later this year when trucks will be needed to haul grain that until now has been transported on the ‘tier 3‘ rail lines. This has caused major ructions in the wheatbelt. While some famers are supportive, that view is not universal. The biggest impact will arguably be on wheatbelt communities, where increased heavy truck movements will affect road safety and social amenity. Many grain trucks will be heading for Kwinana, so Perth motorists will also be affected.

The state government is well aware that more spending is needed on the state’s road network. A major $260 million upgrade of the Great Northern Hwy has recently been completed at Port Hedland.

A further $380 million is due to be spent upgrading the highway from Muchea to Wubin. Works have already commenced on this section. A much larger investment is needed for the Swan Valley Bypass, which will run from Reid Hwy to Bindoon. This is expected to cost $840 million.

There is a long list of other road projects across the state, some funded, but many not. The need for extra roads spending will only increase as more freight is moved by road, whether that be giant dump trucks destined for mines, iron ore destined for Port Hedland or grain destined for Kwinana.