The ‘Baron’ on fertile ground with Yahava 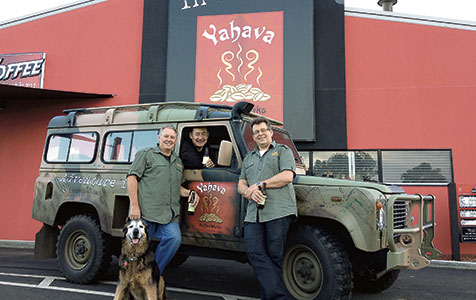 Alex Kok has come a long way since the early days roasting coffee out of a rented shed in Metricup, half way between Busselton and Margaret River.

Twelve years on 'The Koffee Baron', as his staff call him, now leads one of Western Australia's most respected coffee brands.

Yahava Koffee has two bricks-and-mortar stores in WA, one in Singapore, several mobile coffee vans, and has just launched its first drive-through store.

The rationale behind Mr Kok's decision to create the Yahava brand was simple – the Margaret River region had plenty to offer wine connoisseurs, and he recognised the potential for a similar offering with coffee.

It was clear not long after Yahava started up in 2001 that the shed in Metricup would be a short-term home for the business, prompting a move into a larger facility in Vasse.

But recognition of the brand continued to grow and Mr Kok subsequently opened two larger stores in 2009 – one in the Swan Valley and another in Margaret River. In all locations he aimed to provide customers with a venue where they could truly appreciate the art of coffee roasting.

"People need to feel the beans, to see them actually being roasted; they want to savour the aroma and experiment with the many hundreds of exquisite coffee flavours I was creating; they wanted to find their own personal favourite," Mr Kok said.

The success of the two stores, which are operated under franchise licences, has led to a doubling of Yahava's revenue during the past three years, while the number of employees has grown threefold.

A franchise licence was also struck for Yahava's first international store in Singapore, in 2010.

Mr Kok said the early success of Yahava followed the business's dedication to quality and it's branding.

However the franchising business model has also enabled Yahava to grow quickly, with operational characteristics of the successful Metricup store broken down into separate, scalable business units that can be replicated by franchisees.

That's included the launch of the mobile coffee vans, which operate under licences in Perth and the South West, and the recent addition of the Kwik Koffee drive-through stores.

The first such store opened in Vasse earlier this year, with the second due to open in Busselton in September.

The company is also actively seeking franchisees for its stores and kiosks across Australia.

Perth may have the nation's most expensive coffee, but Mr Kok isn't about to get into an argument over price.

"This is not a competition," he said.

"We are not competing with anyone so there is no such thing as price competition. We are adding value to people's lives."