Having built acQuire Technology Solutions into an international success, Bill Withers is starting a venture to help others learn from the experiences of his employee-owned business. 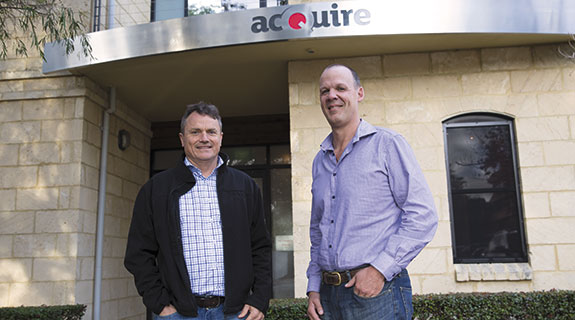 Having built acQuire Technology Solutions into an international success, Bill Withers is starting a venture to help others learn from the experiences of his employee-owned business.

Bill Withers recalls a moment in 2003 when he realised things had to change.

His mining software company, acQuire Technology Solutions, was growing rapidly, had just opened its first international office in Chile, and he was trying to do it all.

“I was running the business just like many others,” Mr Withers told Business News.

“I had 22 or 23 people all reporting to me; it was an extraordinarily difficult time because the company was starting to grow and I was in the thick of everything.”

That’s when he resolved to create separate roles for himself and the other founders, and to hand over activities he was weakest at, such as financial and legal matters.

That resulted in the recruitment of CFO David Stephen in 2003, followed by the appointment of Warren Cook as chief executive in 2009.

That was a pivotal moment for Mr Withers, who has developed a fresh and in some ways radical perspective on business.

“I was able to become a researcher on my own business,” Mr Withers said.

“That’s an incredible place to be, it meant I was 100 per cent on the business.”

He started to challenge the traditional architecture of modern business, and look for a better way.

The subsequent changes included sharing ownership with his staff and establishing an executive board.

Each director combines their operational role with being a ‘total system leader’, having responsibility for a specific ‘portfolio’ such as people, knowledge, relationships or ownership.

Mr Withers doesn’t believe in having external non-executive directors, saying they just don’t have sufficient knowledge of the business to contribute.

He prefers to hire consultants, collaborate with other entrepreneurs, or open up the business to PhD scrutiny when he wants an outside perspective.

“You get really rich information from that approach,” Mr Withers said.

Mr Withers retired from his own board in May last year, with Mr Stephen taking on the role of managing director; but it wasn’t a normal handover.

“We had an external facilitator at our annual planning meeting,” Mr Withers said.

“Based on the feedback from the collective group, it was decided that I would leave, and the team would then decide who should have the portfolios.

“I didn’t appoint anyone, in fact I didn’t participate.”

Mr Withers said succession should not be seen as simply an event.

“You build your business on a principle of succession; ideally it begins on day one,” he said.

“When you always think about handing over to the next generation, it becomes a great enabler for your business.”

Mr Withers acknowledges other businesses have been more profitable over the past decade, but he isn’t fussed.

In fact, he said concepts such as return on equity didn’t even come up at acQuire’s strategic planning sessions.

His goal has been to build a resilient, multi-generational business that will still be running in another 30 years or more.

That includes reinvesting 20-25 per cent of annual revenue on research and development.

That adds up to a big investment, with annual sales peaking at $21 million in 2012.

The concept of having external shareholders is anathema to Mr Withers, whose goal is to build companies on the basis of stakeholder integration.

“I want to pivot capitalism,” he said.

“The traditional model has extinguished humanity, too many businesses have become soulless.”

Amid this lateral thinking, Mr Withers still sees a big role for some traditional management concepts.

“I’m still centred in the need for leadership and accountability, and decision making with speed,” he said.

“Accountability needs to be clear and decision making needs to be effective. If you can’t adapt with speed, you could die.”

As a measure of success, acQuire’s geoscientific information management system (GIMS) is used by 220 companies in 45 countries, and three of its original customers, who signed up in 1997, are still using it.

His new venture is acQuire’s sister company, Adapt by Design, which Mr Withers describes as an operating system that clients install in their business.

Its aim is to build organisations that are agile and able to evolve based on feedback from stakeholders and changes in economic conditions.

The fees paid by clients are based on their payroll, which makes it affordable for startups and not for profits that are not paying high salaries.