Tech platforms have dominated the Innovator of the Year encouragement awards, presented last night, with winners including a video conferencing device for remote communities, groundwater management software, business scheduling software, and a new transmission system for bikes and vehicles. 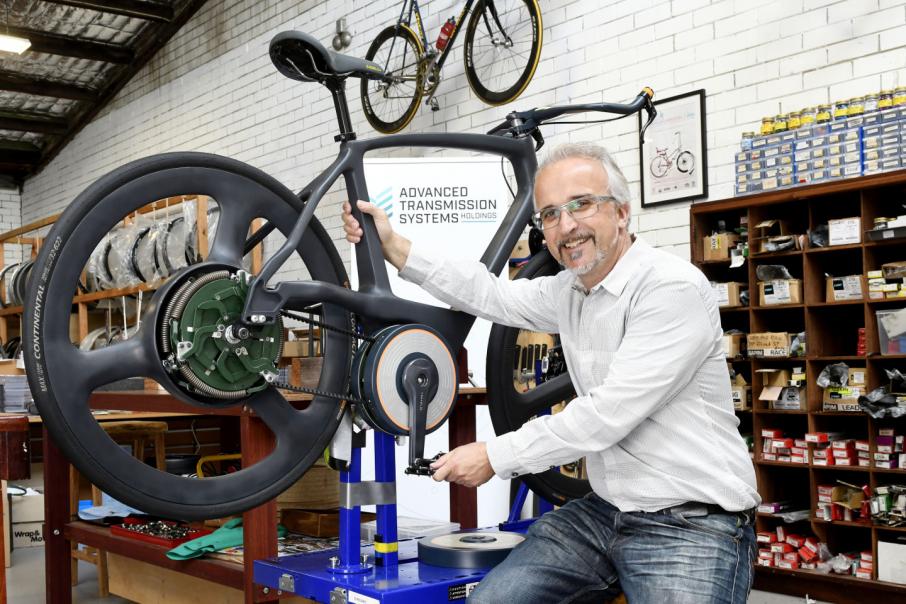 Jochen Franke says his shiftless gears system has potential far beyond its original application for bikes.

Tech platforms have dominated the Innovator of the Year encouragement awards, presented last night, with winners including a video conferencing device for remote communities,  groundwater management software, business scheduling software, and a new transmission system for bikes and vehicles.

What started as a way to improve the ridability of bicycles has developed into a significant expansion opportunity for Perth entrepreneur Jochen Franke, as his innovative continuous transmission system shifts up a gear.

The winner of the Business News ‘Great for the State’ encouragement award and founder of Advanced Transmission Systems Holdings has adapted a shiftless transmission system, known as continuous variable transmission (CVT), where gears can change seamlessly through a continuous range.

“In a manual transmission car, for example, you have gear one to five usually,” Mr Franke told Business News.

“The trouble is that the engine that drives that motor, when it goes up a hill, needs gear 2.4, but it only has gear two or three."

The system has the downfall of being very wide.

By segmenting the system, which usually comprises two large cones or pulleys, Mr Franke was able to make it significantly narrower.

“We modified the conventional variable diameter pulley system such that we segmented the pulley sides,” he said.

“That is really the heart and soul of the system; to segment these discs in a way that only the portions that contact with the belt gets pushed inwards, and the rest of the pulley gets out of the way.”

Mr Franke said there was a range of vehicles and industrial equipment that the system could be applied to beyond bicycles.

The company has now reached a crossroads, he said, and the next major steps would be to finalise partnerships and decide which avenue of vehicle or equipment to pursue.

“We’re in active negotiations with partners, some of them big ones,” he said.

“The biggest focus for us is on wrapping up these licensing negotiations, because that is an immediate revenue stream and could be a pretty lucrative deal there.”

Access to healthcare is an ongoing issue for many remote indigenous communities, and something Con Michael and the team at Balconi Telecommunications are seeking to alleviate.

The Torch was primarily developed for emergency trauma first responders, but is now being touted for use connecting remote communities to city-based healthcare professionals.

Balconi founder Con Michael was approached by St John Ambulance WA to provide a system that allowed a paramedic in Perth to view and understand the situation at the medical event, no matter how remote.

“It’s a typical video conferencing system that you might have on your desktop,” Mr Michael said.

“Something the size of a carry-on case that you can take on a commercial aircraft.”

Mr Michael told Business News that travelling throughout Western Australia had brought home the need for remote indigenous communities to have a better method of consistent communication, which could connect them to ongoing services.

“That’s when I got the idea: maybe (the technology) is not just for the first responder.

Created as a water and nutrient management software, Swan Systems provides a base for precise nutrient and water scheduling and monitoring.

With Western Australian groundwater supplies under constant pressure due to a growing population and changing climate, the founders of Swan realised the need for a cost effective system for agricultural workers to ensure they could optimise water and nutrient consumption.

Founder Rod Campbell said Swan Systems had been operating for around two years, but the team had spent several years before this researching the concept.

They are now pushing towards commercialising the software, and are looking to bring investors onboard.

“We bootstrapped it, and we got some money from friends,” Mr Campbell said.

“We’re now at a stage where we’re capital raising, and really trying to get it to a commercial level.”

Productivity is the buzzword for TOKN Technology, as founder Clinton Schroeder and his team aim to improve companies’ data systems by creating functional apps.

“What we’re trying to do is give the small to medium companies a fair go at enterprise mobility,” Mr Schroeder said.

“Today you can build this stuff, but it costs a lot of money and it takes a lot of advanced development skills.

The company has been rewarded with the South32 technology and innovation encouragement award.

The TOKN product has been live for about 18 months, and has one major international customer and two Perth-based businesses on its books.