The head of a Perth tax return franchise says plans to introduce automatic tax returns could see thousands of WA workers miss out on their full entitlements. 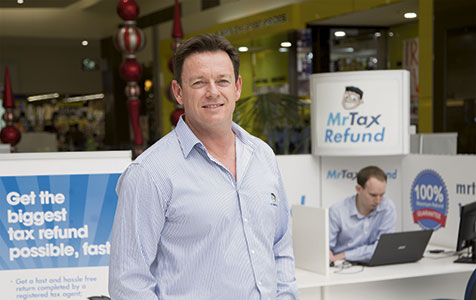 Clicking through 140 slides on the Australian Taxation Office's online tax refund platform can get tedious - especially for younger generations and first-time taxpayers who have never filled out a tax return.

Meanwhile the other option of paying a tax agent $150 to $200 to complete the process on a taxpayer's behalf may seem equally unattractive.

But it's a predicament which Stephen Burns is using to his advantage.

Mr Burns launched his tax return business, Mr Tax Refund, in June 2012 as an online and telephone service enabling clients to simply provide the necessary documents and leave his business take care of the rest.

“I saw the industry as being quite antiquated in that people were expected to go into an office and sit behind a desk,” Mr Burns said.

“I saw the need for a fresh, new, youth-oriented brand that, in some ways, was trying to make tax a bit more fun – that is a pretty hard thing to do.”

One of Mr Burns’ main concerns was that younger workers were missing out on money owed to them because of their apathy about lodging returns; particularly in Western Australia, which has a high level of young workers earning significant incomes.

The government has foreshadowed the introduction of ‘push’ tax returns for about 1.4 million workers next year, which will fill out the necessary information on their behalf and ask for a signature, in a bid to make the process easier.

But Mr Burns said that was likely to offer a blanket refund of only $1,000, while some taxpayers would be eligible for much more.

In its first tax ‘season’, Mr Tax Refund lodged 3,000 returns from a base of 10,000 people registering their details on the website.

Nearing the end of the current tax cycle, Mr Burns is estimating the business will lodge about 10,000 returns – translating into turnover of about $1.3 million.

The majority of Mr Tax Refund’s business comes from younger workers and first-time taxpayers. It’s proving to be a lucrative market, with about 250,000 new taxpayers entering the Australian market every year.

“They’re so aware of technology these days and we were completely bowled over with people wanting our service in the first year,” Mr Burns said.

Mr Burns told Business News it significantly boosted business, so much so that he’s embarked on expanding Mr Tax Refund through franchises.

Nine franchisees have signed up thus far and will set up hubs and refer business back to the central tax agent office to lodge the returns, while taking a cut of the revenue.

Not only was the convenience of lodging a tax return in a shopping centre attractive for taxpayers, it was also much more financially viable for the business owner than having an established office, he said.

“The tax season runs for four months of the year and realistically the rest of the year you’re wasting your money,” Mr Burns said.