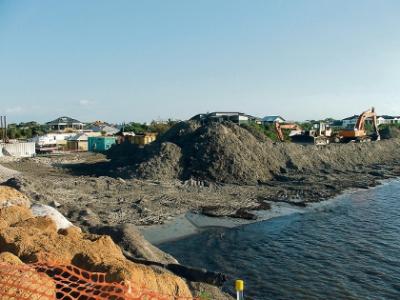 A Busselton real estate agent has learned the hard way how not to invest in property.

After putting his money into the struggling Port Geographe development, Sam Hanson was hit from all sides - failing to secure bank finance, then forfeiting his deposit, and most recently being told he could not get a stamp duty refund.

Mr Hanson’s case played out in the State Administrative Tribunal, where he had been fighting for a stamp duty refund.

Despite Justice John Chaney having some sympathy for Mr Hanson, the tribunal could do nothing to help as he was one month late in lodging his application.

“This is a case where the (legislation) results in a harsh and unfortunate outcome for an ordinary citizen of the state caught up as an innocent investor in a failed property development,” Justice Chaney said in his judgement.

His saga began in April 2006, when he agreed to purchase a lot in the struggling Port Geographe residential and canal development north of Busselton.

Despite that heavyweight backing the project has been a failure, mainly because a large buildup of seagrass every year causes foul odours and requires a costly annual clean-up.

The Hanson family business was apparently very familiar with Port Geographe; its website states that it achieved more than $100 million of sales at the canal development.

Despite this local knowledge, Mr Hanson had difficulty obtaining finance to complete the contracted purchase, because valuers considered his lot to be worth less than the purchase price, according to the tribunal ruling.

Thereafter, Mr Hanson become embroiled in disputes with the property vendor, Axiom subsidiary Tallwood Nominees, and project manager QUBE Property Group, over which of them was responsible for substantial works required under the contract.

Mr Hanson told the court that he began trying to get out of the contract from July 2009,

However, Tallwood and, later, its administrator PPB Advisory played hardball, demanding completion of the contract.

In April 2012, they struck a deal to cancel the contract and for Mr Hanson to forfeit the deposit. so that he could seek a refund of stamp duty.

Mr Hanson’s application was lodged with the Commissioner of State Revenue on April 19 2012, one month beyond the five-year time limit on lodging such applications.

As a result, the application was disallowed.

Despite this, Mr Hanson thought he might still qualify for a refund, based on discussions held between Office of State Revenue consultant Shane Hannan and his father Mr Hanson snr.

“It is quite clear that Mr Hannan held out a prospect that, notwithstanding the lapse of the five-year period, a way may be found to refund the duty in the particular unique circumstances of the case,” Justice Chaney wrote.

In his application for review, Mr Hanson told the court that: “From that advice and the amount of stress the whole dispute was causing me, I decided to forfeit my deposit of $23,500 and seek the refund of my stamp duty of $19,200 with the vision of moving on.”

Justice Chaney said Mr Hanson “would clearly have been entitled to a refund” if he had lodged his application one month earlier.

However, he concluded there was no discretion for the commissioner to make a reassessment more than five years after the original ruling.

Justice Chaney noted the commissioner’s argument that the five-year limit provides the state with certainty of revenue.

“That is doubtless cold comfort to Mr Hanson in the quite unusual circumstances of this case,” he stated.

Meanwhile, the government announced last November that it would spend $28 million to fix the seaweed build-up and beach erosion at Port Geographe, after the three owners wrote off their investments and walked away from the project.