Taking it to the people 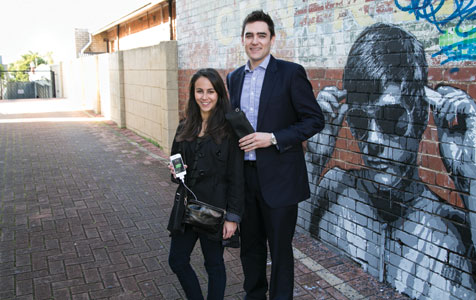 DO THE HUSTLE: John and Lisa Winters opted to use crowdfunding site Indiegogo to raise funds for their start-up business, Hustle. Photo: Attila Csaszar

ONCE a funding source used by artists and social entrepreneurs, crowdfunding is gaining wider acceptance in a business world still emerging from the shadows of the GFC.

In the recent past it was musicians, in particular, who used crowdsourcing, the concept from which crowdfunding sprang, to fund recordings, while online platforms such as Australia’s Pozible and StartSomeGood have also helped social entrepreneurs solicit donations to help drive their projects.

The amount of money raised through Pozible demonstrates the growing interest in the strategy. Already this year pledges gained are on a par with the $5.8 million raised during the whole of 2012.

Now, faced with shrinking sources of investment capital, technology entrepreneurs are turning to crowdfunding to get products into production.

And it seems appealing to a wide pool of investors via the internet has benefits aside from merely the financial, as husband and wife team John and Lisa Winters have discovered.

The Winters are among those to take the step into the great collective – they’re using a global crowdsourcing platform, Indiegogo, to raise money needed to manufacture the first line of their on-the-go mobile device chargers.

The couple had prototypes readymade through a $30,000 investment of their own money, but needed a further $35,000 to get the first run of products made.

They realised crowdsourcing was a viable option as it also gave them an opportunity to test the product on real customers.

“We wanted to use [crowdfunding] as a launch pad, and also as a marketing tool to be able to take it to market at a time when we actually didn’t have the product,” Mr Winters told Business News.

“It’s sort of a testing ground for the product and for consumers.

“You can actually take a new product that’s not readily available to anyone in the market to a massive group of consumers who can test it for you, and if it works there then there’s a pretty good chance that it’s going to work in the broader market.”

The Hustle campaign offers ‘investors’ the first products at a greatly discounted price, and before it’s widely available.

Mr Winters, an investment adviser at Blackswan Securities, said that meant the start-up business wasn’t subject to regulation by the Australian Securities and Investments Commission.

“Crowdfunding’s got a bit of a question mark over it at the moment (in terms of regulation) and even the securities exchange commission in the US hasn’t ruled on it officially yet either,” Mr Winters told Business News.

“But people aren’t investing in equity, they’re actually making a donation towards your product, so in effect it’s presales – the money that we raise is effectively income for the business.”

ASIC says it regularly monitors crowdfunding and has issued guidance for projects utilising the tool to raise funds. It says campaigns such as the Winters’ are not subject to ASIC regulation, but are subject to Australian Consumer Law.

Another Perth entrepreneur, Ari Zagnoev, has also turned to crowdfunding to source capital for his combined keyboard and mouse development – the ‘combimouse’.

The idea emerged from personal experience one night when Mr Zagnoev was at his computer, but too tired to keep moving his hand from the keyboard to the mouse.

“I thought there has to be a better way,” Mr Zagnoev said.

He has invested personal funds into developing the combimouse and raised $7,000 through crowdfunding to pursue the idea.

The product is still in its formative stages and Mr Zagnoev said the fundraising campaign hadn’t been as successful as he’d liked because people were wary about investing in an incomplete product.

But he said interest had been significant and crowdfunding had played a key role in increasing the exposure of the product.

Co-founder of crowdfunding site StartSomeGood, Tom Dawkins, said the concept had traditionally been common with artistic and social entrepreneurs but more ‘product makers’ were turning to it as an alternative fundraising option.

“Often people are raising funds to pilot or test something, and then if that’s successful, doors and traditional sources of capital open,” Mr Dawkins said.

“The benefit of it, if you pull it off, is that you retain ownership … and you don’t just exit it with money, you exit it with customers, which is what you need.”

Meanwhile a group of Perth entrepreneurs has recognised the growth in crowdfunding, but also a gap that needed filling.

The group has launched an online platform called Jumpstartz, which combines efforts to raise funds and resources together – a factor co-founder Aaron Clements said was overlooked by traditional crowdfunding platforms.

“Often projects which may be successful in raising funds through crowdfunding will fall over because they don’t have the resources,” he said.

“Crowdfunding and the model as it stands at the moment, without being able to facilitate resources, requires you to really have all of your ducks in a row and then have funding; that’s the only component that’s missing and unfortunately that’s not always how it works.”