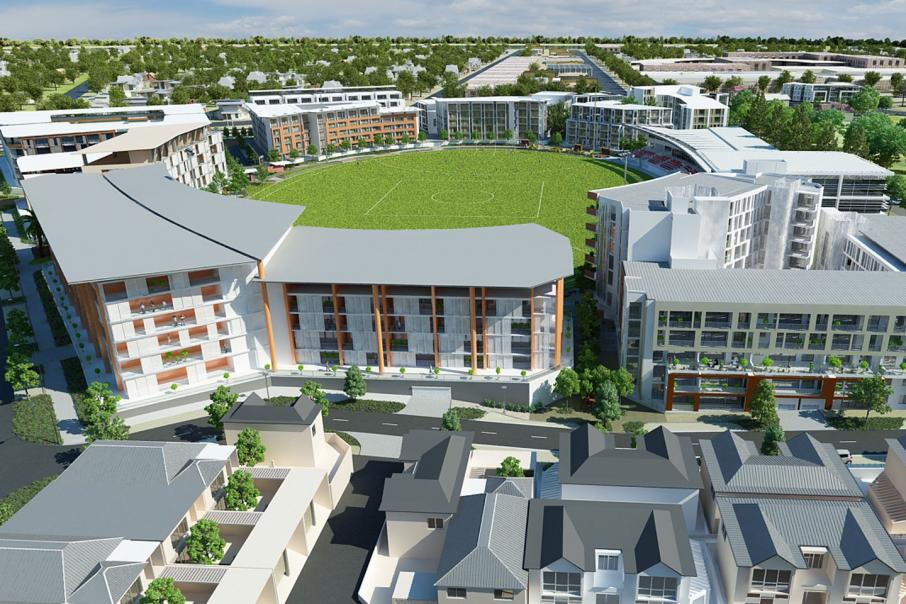 An architect's rendering of LandCorp's vision for the Claremont on the Park precinct. Image: LandCorp

TRG Properties will develop 170 apartments at Claremont Oval, after becoming LandCorp’s fourth private sector partner at its Claremont on the Park renewal project.

LandCorp today announced TRG had been successful in its bid for Lot 508 at Claremont on the Park, which is the precinct’s largest development site at 7,418 square metres.

The site is located on Shenton Road, directly opposite the Claremont train station.

TRG Properties managing director Simon Trevisan said TRG would partner with HASSELL to progress plans for the development, with the sale of the site expected to settle in June.

"This is a site we had identified early as offering the potential to create a premium-quality entry statement to the precinct, and one that would connect the existing town centre to the redevelopment," Mr Trecisan said.

"Our development will make the most of the site's long north-facing elevation overlooking Claremont Oval and the proximity to all of the amenity Claremont has to offer - features traditionally highly sought-after by our buyers."

TRG expects to lodge a development application and launch a marketing campaign for the site later this year.

Georgiou Living was the first developer appointed at Claremont, with its 95-apartment project, The Pocket, completed around 12 months ago.

Mirvac Group holds two sites at Claremont, planning two buildings to be known as The Grandstand and The Reserve, collectively containing 234 apartments.

Mirvac appointed Broad Construction to build the apartment buildings in December last year, with works expected to be complete by August 2018.

Prior to TRG, Blackburne was the latest developer to buy into Claremont on the Park, having been appointed by LandCorp to deliver a 143-dwelling apartment building in April last year.

Blackburne will partner with aged-care services provider Amana Living at Claremont, with the project also to include a boutique supermarket and a café.

Mr Marra said the redevelopment project was a good example of how LandCorp could realise the potential of underutilised spaces.

“The precinct is beginning to come alive, with much of the residential development under way and the Claremont Football Club’s new clubrooms to be completed soon,” Mr Marra said.

Once complete, Claremont on the Park is proposed to deliver more than 750 homes.