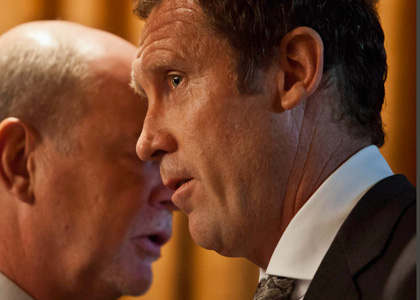 IT has become almost accepted wisdom that value of annual general meetings has passed its use-by date, or at the very least the format is in need of major reform.

In an era of continuous disclosure and instant communication, it is extremely rare to actually learn anything new at an AGM.

Instead they are usually platforms for dull and predictable presentations by company directors and set-piece speeches by shareholder activists.

In most cases these days, the main point of interest is whether shareholders will lodge a protest by voting against the remuneration report, and whether that vote will be above the 25 per cent level that constitutes a ‘strike’.

Fortescue Metals Group hosted a bright and breezy meeting that delivered value, mostly because of commentary and discussion - and, notably, entertaining comments - that went beyond the mandated format.

Chairman Andrew Forrest used his opening address to talk about the regime change that occurred in China last week, rather than just rehashing the year that was.

He spoke from the heart when praising the contribution of long serving director Graeme Rowley, and entertained the audience by calling for a mock vote on whether Mr Rowley should continue on the board.

Mr Forrest also threw in a few one-liners, such as declaring “welcome to democracy” after Chinese director Cao Huiquan was elected to the board.

Managing director Nev Power delivered an update on the company’s operations, but did so in a concise and forward-looking manner.

Mr Forrest kept things moving at a brisk pace during the formal part of the meeting. Instead of reading each resolution in full, he dispensed with the long-winded legalese by displaying the resolutions on the screens.

The finale was Mr Forrest’s put-down of the Australian Shareholders’ Association. While most chairmen are deferential to the ASA - sometimes overly so - Mr Forrest sarcastically described it as a “grandly-named volunteer organisation”.

He proceeded to lecture the ASA rep, and expressed particular disappointment at the ASA’s practice of lodging proxy votes before meeting with company directors; himself included.

The ASA was nowhere to be seen, but there were many well-informed and articulate shareholders who had plenty of probing questions to put to the board.

TFS has experienced a tumultuous year, with directors coming and going at a great rate, and company founder and chief executive Frank Wilson returning to the board as executive chairman.

Mr Wilson had a lot of answering to do, from shareholders who wanted to know more about the company’s disclosure standards - including a hitherto unconfirmed takeover approach from a private equity fund - its corporate governance practices, and the condition of its sandalwood plantations.

The meeting included some very pointed exchanges about the definition of independent directors.

The critics questioned the independence of three directors: Stephen Atkinson, who was Mr Wilson’s business partner at law firm Wilson & Atkinson; Julius Matthys, who was best man at Mr Wilson’s wedding; and Adam Gilchrist, who was a director of a company that had provided marketing services to TFS.

The meeting was told that all three complied with the ASX’s corporate governance guidelines, because friendship was not a relevant factor and none had business dealings within the past two years.

Shareholders were left to make their own judgement.

The critics included a group, led by former director Brett Myles, that wanted to oust most of the current directors; but his was by no means the only dissenting voice.

The result was a thorough grilling for Mr Wilson, who didn’t always satisfy the critics, but to his credit allowed the questioning to continue for as long as shareholders were raising their hands.

Nobody got everything they wanted from the meeting, but all of the people in attendance would have left with a much better understanding of what is going on.