Giving managers responsibility for making decisions relevant to their sections is crucial at marine services business TAMS Group, which has steadily added new capabilities and staff to differentiate itself as a full service provider in a market full of specialists. 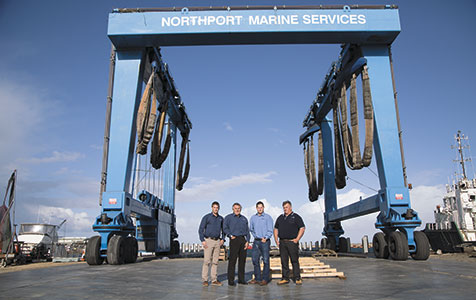 Giving managers responsibility for making decisions relevant to their sections is crucial at marine services business TAMS Group, which has steadily added new capabilities and staff to differentiate itself as a full service provider in a market full of specialists.

“There aren’t too many jobs out there we couldn’t complete from A to Z now,” founder and managing director Grant McCleary said.

“It’s all about adding and growing the company. You can never stand still.”

From its beginnings as a diving and mooring business, TAMS Group has grown into a full-service provider, through natural growth and targeted acquisition (having bought Northport Marine Services in Fremantle in 2011).

Mr McCleary said the North Fremantle-based business, which recently established a shore base in Onslow, relied on its managers working together to solve problems and identify opportunities.

“We’ve had jobs that were lagging behind and a couple jobs we’ve broken even but we’ve never lost on a job.

“The way we run things (is) we go ‘ok, ladies and gentlemen, sit round the table, come up with an answer, how are we going to turn this job around’.”

Mr McCleary, who expects managers in particular to be versatile and interface with other divisions, rewards its staff with shares in the private company.

“Everybody steps up to the plate so much more when they’re going to get a benefit out of it as well,” he said.

“They’re enthusiastic, they’re not scared to come up with ideas.

“Nobody in our company is scared to make a decision.”

Mr McCLeary said the company was always seeking expansion opportunities and was considering options outside of WA either through continued organic growth or the occasional acquisition.

“There’s a couple of companies that interest us,” he said.

“It’s always (a choice) between how much money do we have to pour in to get to where they are or do we just take them out.

“You sit back and do your sums and have a look at the fit and the long-term viability of the company. Everybody sits around and analyses it.”