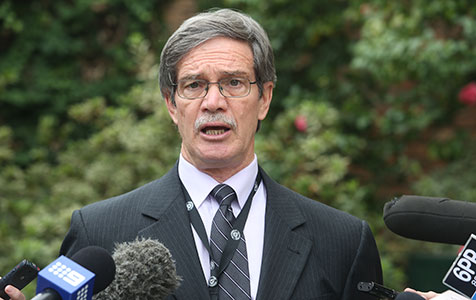 Energy Minister Mike Nahan is positive the remerging of energy retailer Synergy and generator Verve will lead to increased competition in the marketplace, but acknowledges the details of how the ‘reconnection’ can be achieved are still to be worked out.

Speaking at the Energy in Western Australia conference this morning, Mr Nahan said he had been tasked with “putting Humpty Dumpty back together again” as the two state-owned utilities moved towards trading as a single entity from January 1 next year.

Mr Nahan said his overwhelming objective in pursuing the merger was to strip costs rather than raise prices.

“So anybody who argues that we should immediately go (from) cost reduction to (higher) pricing … what I suggest they do is join the ‘higher electricity price party’ … and see how many votes you get,” he said.

Mr Nahan said he hadn’t been fully briefed on the details of the merger, but a process was being developed.

“The question is, how do we get there?” he said.

“It will entail Synergy and Verve cutting back and creating space for the private sector in generation and in retail.

“We have an implementation team lead by (consultant) Peter Oates. They’re working on it; I am confident they will come up with a system that facilitates that.

“That is set up to achieve those main goals and will ensure that Synergy, particularly in the contestable market, is subject to competition, more intense competition from the private sector.”

Mr Nahan said the disaggregation that occurred in 2006 had pitted Synergy against Verve and continued to cost the government.

“The narrow focus of Synergy and Verve caused them to pursue projects that suited their purpose rather than the state as a whole,” he said.

“A win for Synergy is just a cost for Verve and vice versa.

“This year we expect to subsidise Synergy to fund the franchise (non-contestable) market to the tune of $380 million. That’s a lot of money; it’s equivalent to a good-sized hospital every year for the next four years.”

Mr Nahan said that, with estimates showing 900 megawatts of excess electricity capacity expected in 2015 and 2016, Synergy and Verve could afford to reduce their presence.

“Verve Synergy is going to slowly, steadily vacate the contestable market and concentrate on the franchise market,” he said.

The minister alluded to the possibility of further changes to the state-owned generator and retailer, including the two entities existing as separate gen-tailers in the long-term future.

“The merger is a transitional but necessary phase to further disaggregation down the track,” Mr Nahan said.

“There isn’t any incentive or capacity in the government and private (sector) and the community for a large-scale privatisation at this time. So what we have to do is in fact set up a system that prepares for down the track disaggregation,”

Mr Nahan said getting the merger right was the current priority for the state government.

“The merger of Synergy and Verve is the only responsible course for the government to take at this particular time and that if we want to see the electricity sector that includes comprehensive private sector involvement it is the only way to go at this stage,” he said.

“We do need a system that facilitates, encourages the private sector to take up the space and that needs scale, capacity, balance sheet and knowledge and certainty in the market, and that’s not easy.”