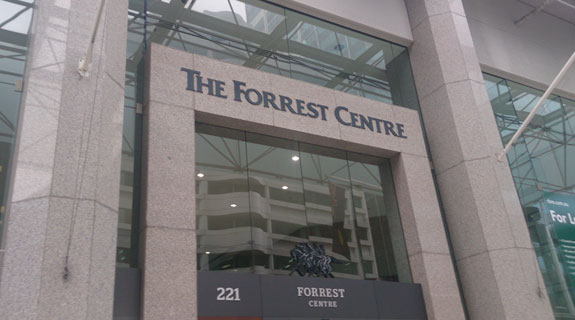 Energy retailer Synergy has finalised its lease deal to move into the Forrest Centre on St Georges Terrace, taking up 8,000 square metres in the building, which was listed for sale earlier this year.

Speculation regarding the transaction has been widely circulated in recent months, however leasing agent CBRE confirmed the deal today.

Synergy will take up all but one floor in the nine-storey building, which is part of an $800 million portfolio brought to market by the Insurance Commission of Western Australia earlier this year.

CBRE office services director Lachlan Lewis said the 10-year deal was struck at a net rental of around $520/sqm.

“Synergy is presently operating out of two CBD sites so the main driver was to consolidate into single premises,” Mr Lewis said.

“There was an exhaustive process to identify 219 St Georges Terrace, which is effectively brand new office space internally following a massive refurbishment and upgrade program carried out by the building owners.”

Mr Lewis said other drawcards for Synergy were premium-grade end of trip facilities and lifestyle amenities and the building, which include and onsite gym and an outdoor swimming pool.

Synergy will move into the building in December.