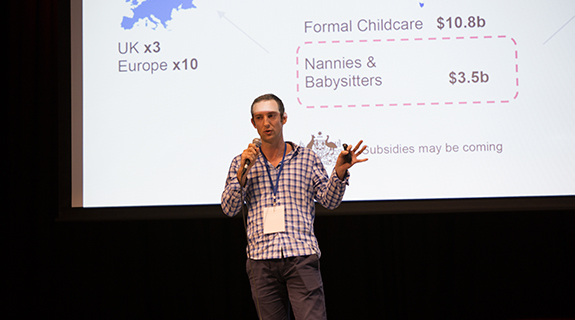 Perth's APE Mobile has been pipped at the final post in the OzApp Awards, part of the West Tech Fest, with Sydney-based childcare application Kindy taking out the top prize.

Kindy’s app is designed to make finding childcare providers and babysitters easier, even at short notice.

Pitching the application to judges and an assembled throng of Perth’s tech elite at the Perth Town Hall, Kindy founder and chief executive Hugh Podmore said the inspiration for the app was to provide a trusted platform for people to find accredited childcare providers. The app was launched three months ago and allows users to browse, book and pay for pre-screened nannies and babysitters across Australia.

The whole process takes place in the app, from booking to payment, while it has already garnered around 4,000 users, a third of which are parents.

Kindy will receive $US100,000 in funding after winning the Australian QPrize from Qualcomm Ventures.

It will also get the chance to compete in a worldwide forum of international QPrize winners to win another $US150,000.

Winners of the international QPrizes, which was first awarded in 2009, have collectively raised $150 million, while finalists have raised more than $450 million worldwide.

APE Mobile was the only Perth-based finalist in the Australian awards, with its app designed to cut down on paperwork for civil construction contractors. There were over 200 entrants in this year’s OzApp Awards, which covered not only Australia, but Indonesia, Singapore, Thailand, the Philippines and Hong Kong.

The list was first narrowed to 65 applications, then shortlisted to 20, before the top five was announced late last year.

Two of the other five finalists were from Hong Kong, in job matching app JOBDOH and pre-school analytics app Joy Sprouts.

The other finalist, Freight Exchange, which seeks to reduce the number of empty trucks through the sharing of excess capacity, was from Sydney.