Sydney is not Australia. There, I’ve said it. 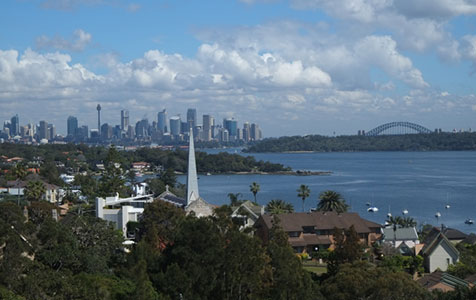 Sydney is not Australia. There, I’ve said it.

And while to many it is a statement of the blindingly obvious, its truth seems not readily apparent to the people who live in Australia’s biggest city, or the national media organisations based there.

Nothing better illustrates the gap between reality and Sydney’s delusion of dominance than the debate about housing prices and interest rates – a debate that ought to be confined to people living in Sydney but instead has become a national obsession.

Low interest rates, caused by a countrywide economic slowdown and a lack of investment options that yield a reasonable return, are at the heart of a Sydney property bubble, which has reached dangerous levels.

In time, perhaps sooner than most people expect, the bubble will burst, damaging everyone from home buyers and investors to banks and politicians.

The reason it is easy to predict an end to the Sydney boom is that there is no underlying economic reason for prices to be rising sharply, given that the wider Australian economy is flat, and perhaps sliding into its first recession in more than 20 years.

Booms in property prices, even those in a single big city, do not sit comfortably with a downturn in the wider economy.

One of the financial factors behind the Sydney boom is the lack of investment alternatives for people with money. High-yield listed companies, led by Australia’s big four banks, reached a price peak earlier this year, and leading mining and oil companies are in a cyclical decline.

Falling rates of return on the stock market, coupled with super-low interest rates on savings accounts and government bonds, have turned the Sydney residential property market into a casino rather than a place where people live.

The second key factor is that debt-servicing costs on low interest rates have encouraged people to borrow as much as they can afford on a 4.2 per cent mortgage without thinking about their obligation at a 7 per cent rate (on a mortgage of $500,000 the difference is $1,000 a month in additional repayments – or an extra $12,000 a year).

An attempt by Reserve Bank governor Glenn Stevens to talk down the Sydney market has not worked, yet. Nor have higher borrowing hurdles introduced by most major banks in an attempt to stem the speculative tide.

What happens next could be quite interesting, because the Reserve Bank is contemplating another cut in interest rates to try and stimulate the wider economy, which should mean that banks will charge their business customers less and more steam should be knocked out of the overvalued Australian dollar.

Sydney, however, seems to have become a blockage in the national economic system, with politicians worried about what another interest rate cut might do property prices in that one city.

If, potentially, another rate cut feeds the Sydney property frenzy, then the number of people exposed to heavy losses when prices fall (which they will) expands further, with many of those future losers living in marginal electorates which could determine which political party governs Australia after the next election.

But without another rate cut and a lower dollar, the chances of a significant and sustainable economic revival in the wider economy becomes harder to deliver.

So what we have is a curious case of the Sydney tail wagging the Australian dog, with political and monetary decisions being made on the basis that property prices in a single city are more important than what happens in the rest of the country.

It is, obviously, a complete nonsense.

If someone chooses to buy a property in Sydney today in the belief that it will be worth more at this time next year then more fool him, because the chances are it will actually be worth the same or, more likely, less, for such is the way markets work and how busts always follow booms.

Even the lure of a fresh cut in interest rates should not be sufficient incentive to enter a red-hot property market because it simply means that the job of servicing a mortgage will be that much harder when rates rise in the future (which they will).

But the real problem is that political, banking and business leaders have become obsessed with how to manage a speculative property bubble they cannot control – and which will eventually burst under its own weight of inflated expectations.

By focusing on what happens in the Sydney property market, the federal government and the Reserve Bank are taking their eyes off the wider economy, and that’s not a good thing.