Sydney-based mobile app Swift has won this year’s OzAPP Awards for its logistics dispatch service, which can be used to easily route deliveries and reduce transport costs. 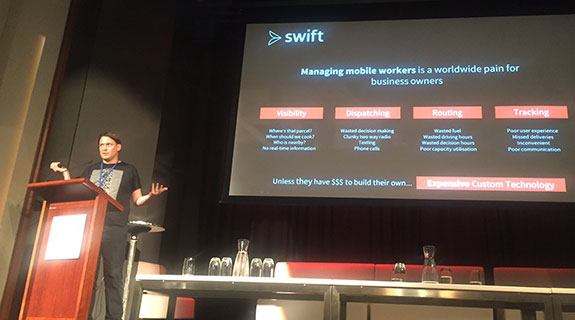 Sydney-based mobile app Swift has won this year’s OzAPP Awards for its logistics dispatch service, which can be used to easily route deliveries and reduce transport costs.

The program is run by Curtin University and available to innovators across the Asia-Pacific.

The prize is a $100,000 convertible note from technology giant Qualcomm, according to judge Charlie Gunningham.

Swift is lead by former Australian Rules footballer Joel Macdonald as managing director, with Sebastien Eckersley-Maslin as a co-founder.

Mr Eckersley-Maslin won the EY entrepreneur of the year in 2013, after founding startup accelerator BlueChilli.

Finalists in the awards included Hike, also targeted to businesses, with a point of sales software offering, while Airlinc enabled users to turn their mobile phones and tablets into an audio monitoring tool that can be used by producers at a lower cost than traditional hardware

Simply Wall St featured as a finalist, too, for its mobile application that turns complicated financial data into infographics.

"Perth born Simply Wall St did an excellent pitch, and are to be congratulated for being in the top 5,” Mr Gunningham said.

Simply Wall St later moved to Sydney after a Series A funding win, but is still headed by creators Al Bentley and Nick van den Berg, who lead a team of five.

Business News was a media sponsor for the awards.