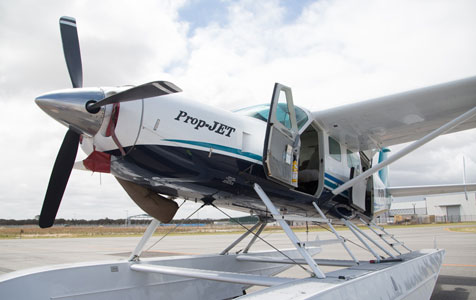 Catalina Airlines' Cessna 208 Caravan, which has been approved for tour trials by the Swan River Trust.

The seaplanes will take off from the river near the South Perth jet-ski area, and conduct tours to Rottnest Island, Mandurah and Margaret River.

The Swan River Trust said it had granted approval for Catalina to use its Cessna 208 Caravan for the 12 months of the trial, subject to a number of environmental conditions.

The trust, however, has not given approval for Catalina to use its flagship plane, a vintage Grumman Albatross.

The trial follows 12 months of wrangling between Catalina, which is a private venture owned by SafeRight entrepreneur Mack McCormack, and the Swan River Trust, as revealed by Business News last month.

It may be extended by six months to allow the operation to run over two peak periods, provided there is no negative impact on the community or waterway.

The Swan River Trust’s statutory planning acting manager, Jennifer Stritzke, said the approval would be cancelled or suspended if any of the conditions put in place to protect the river were breached.

“The proximity of the seaplane landing area to Milyu Marine Park and Nature Reserve was one of the major considerations for the trust, as this area has been set aside as a refuge for migratory wading birds protected under international agreements,” Ms Stritzke said.

“In an effort to protect birdlife, the Cessna 208 Caravan seaplane and the company’s support vessel are not permitted to enter the Milyu Marine Park and an exclusion/no fly zone has been established 300 metres from the shore to minimise shadowing and disturbance of birds in the area.

“Restricting the seaplane from flying close to the Como foreshore will also greatly reduce any noise impacts on nearby residences.”

Catalina Airlines will also need to obtain approval from the Department of Transport and the Civil Aviation Safety Authority before conducting any tours.

Public comments on the seaplane operations will be welcomed by the Swan River Trust.