Sustainability-driven land developments are taking shape across Western Australia, but only five projects have achieved the top six-leaf EnviroDevelopment certification. 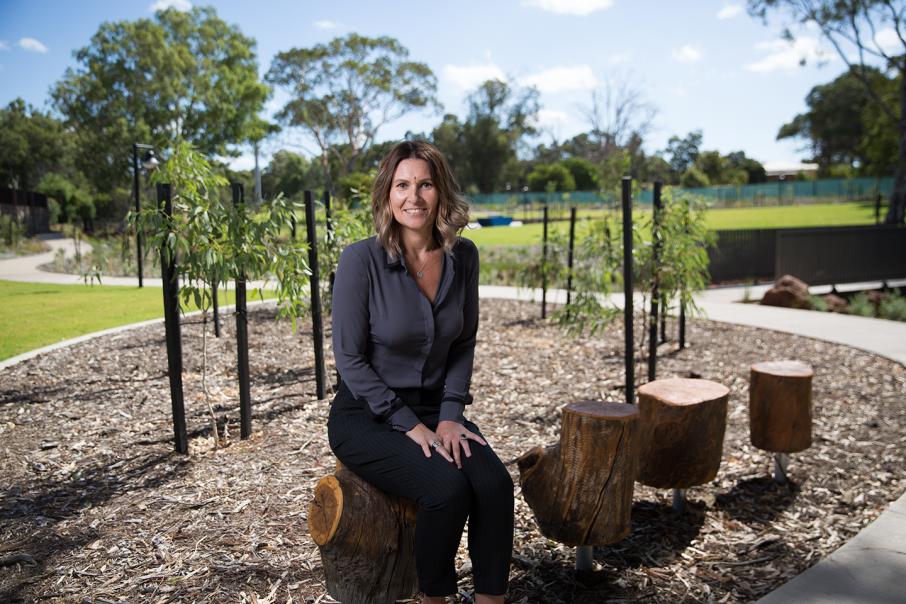 Sandra Klarich says residents can reduce their cost of living and has even purchased land at Rosehill Waters for herself. Photos: Attila Csaszar

Worm farms, a community orchard and heat pumps replacing the need for gas are all part of the sustainability mix at Rosehill Waters, a new residential development under way in South Guildford.

The Handle Property Group managed project, where 95 per cent of roads are made from recycled materials and open drains have been converted into living streams, issued its first lot titles (174) in November.

Almost half of that first tranche has already settled or has entered negotiations for settlement, with more lots anticipated to launch in July and 625 residential lots to be delivered by the project’s expected completion in 2020.

Rosehill Waters general manager Sandra Klarich said although sustainability was nothing new, there had been an increase in developers adopting the concept.

“Cost of living, it’s not just about where you’re located; it’s becoming more about how you live in terms of waste management, recycling, energy, water and the materials used (in the build).

“We’re educating people to be more energy efficient to save the environment, but also this will save them money over time.”

Ms Klarich said Rosehill Waters had one of the largest photovoltaic (PV) systems in the country and every home in the estate would automatically receive a free solar panel, with batteries offered through packages.

PV-generated electricity, together with good design principles, high performance glazing and efficient lighting, will reduce energy use for Rosehill residents by 60 per cent, based on a comparable modern Perth home.

Ms Klarich said the push for sustainability had stemmed from the company wanting to deliver a point of difference.

When the site, formerly the Rosehill Golf Course, was rezoned from rural to urban in 2015, it was met with backlash from local residents and Perth Airport, as the estate sits under a main flight path.

“I wanted to start a different conversation,” Ms Klarich said.

“We were already planning to deliver noise attenuation in every home due to the aircraft noise – extra thickness for ceilings, extensive full cavity insulation, double laminated glass, all of those properties significantly reduce noise but also have benefits for energy efficiency.”

Key water initiatives include a community bore system for private lot irrigation via a third pipe network, expected to result in a 40 per cent reduction in potable water use, as well as waterwise gardens and the use of low-flow taps.

Earlier this month, Rosehill Waters was recognised for its sustainable urban design and management practices with an award for excellence from Stormwater WA.

Additional initiatives include enabling civil contractors and builders to reduce their waste to landfill by more than 80 per cent, the preservation of 11.7 hectares of green space, recycling existing trees and mulch, and providing a public orchard and a range of community building programs.

Ms Klarich said the biggest hurdle during project delivery had been resistance to change, particularly in getting innovative ideas such as the recycled road base through local government, as it was not standard practice.

“It’s about changing people’s way of life,” she said.

“We’re not just developers that want to earn a dollar and leave; we want to leave a legacy and something people talk about for a long time.”

Lendlease has applied a similar mindset to its 710ha Alkimos Beach, a joint venture with LandCorp and the first estate in Western Australia to achieve all six elements of UDIA’s EnviroDevelopment certification.

Alkimos Beach was also named the first estate nationally to achieve a six-star green star community rating from the Green Building Council of Australia in 2015, and launched a $6.7 million solar energy storage trial in partnership with Synergy in 2016.

Other energy innovations include the use of 30 per cent cement replacement product for curbing and footpaths, and educating residents about the use of lighter colour roof materials to reduce heat impact. 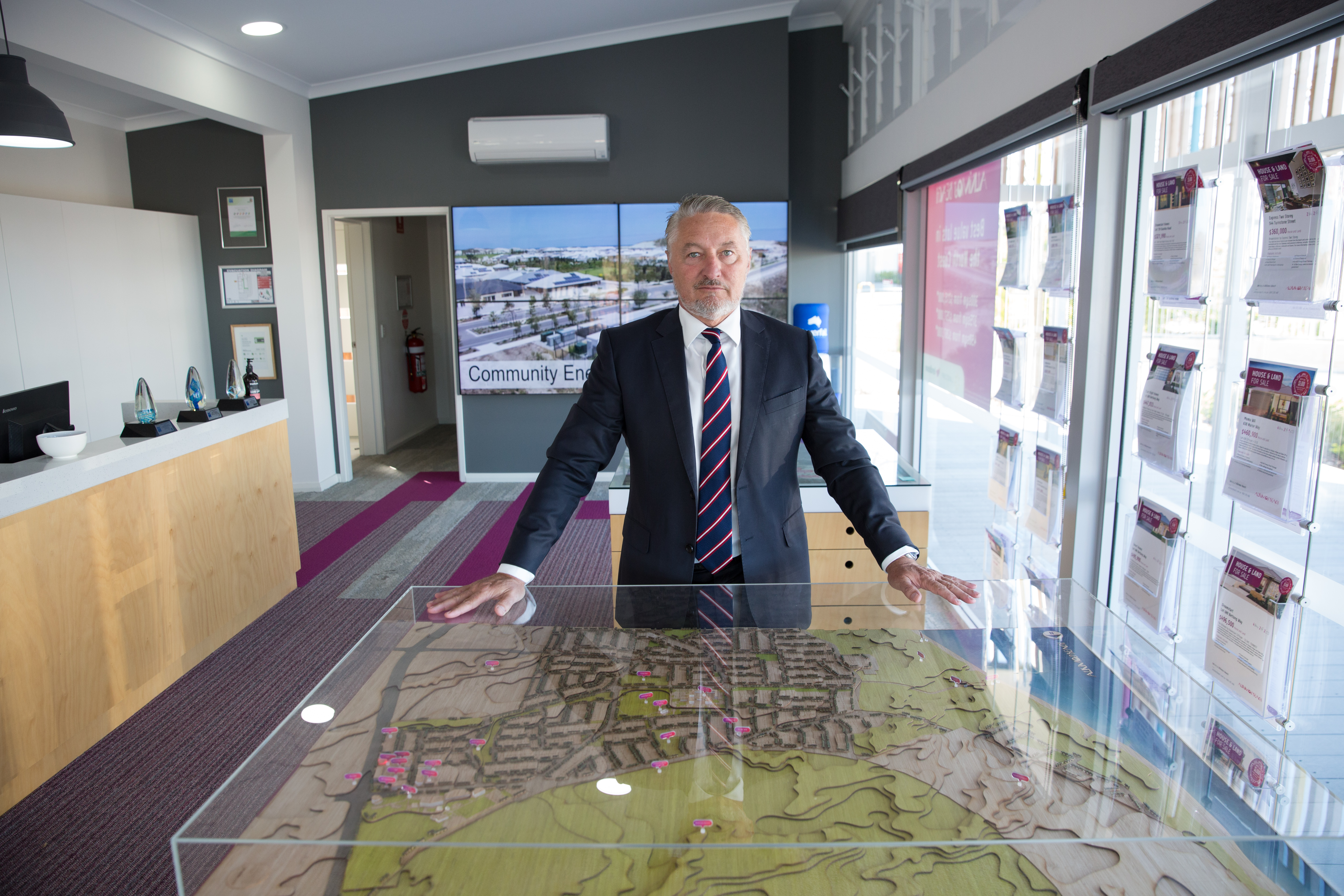 Anthony Rowbottam says Lendlease wants to lift the benchmark of the industry through sustainability.

Last year, Alkimos Beach was the top-selling coastal community in Perth for the December quarter, which Lendlease general manager, communities WA Anthony Rowbottam said was evidence that its investment in sustainability was starting to pay off.

“We wanted to lift the benchmark of the industry through sustainability,” Mr Rowbottam told Business News.

“There are increasing expectations from customers and barriers to entry for sustainability are falling, where the cost of solar panels has come down; it’s making commercial sense.

“And it’s become more than green, where sustainability isn’t just about the environment, it’s social and economic as well.”

Mr Rowbottam said the estate’s partnership with Surf Life Saving WA was one example of delivering on its community target, where programs were provided to residents free of charge.

Mr Rowbottam said that, like Rosehill Waters, the biggest challenge for Lendlease was the approval of initiatives that hadn’t been implemented elsewhere previously.

This included working closely with local council to ensure it could quickly deliver its Sprout Community Hub, which is a repurposed shipping container providing public space and a cafe from which 10 cents from every coffee goes into a community fund.

“It’s a competitive advantage, and part of our obligation as developers to provide the best communities for people to live, mindful that they’ll have lower running costs of their homes if we do a good job,” Mr Rowbottam said.

“It’s hard when you put your neck out, but more developers are starting to go on that (sustainability) journey now.”

Cedar Woods’ Bushmead estate in Hazelmere is another six-leaf certified WA EnviroDevelopment, where rainwater tanks and solar cells are available to residents as a rebate and two thirds of the 273ha site will be reserved for parks and a recreational reserve.

State manager Ben Rosser said sales had been strong since the first stage was launched in June last year, with the estate’s natural bushland a unique offering in the Perth metropolitan market.

“If you look at how our power costs are rising here in WA, people will be far more focused on it (sustainability) in time,” he said.

There are currently 125 projects nationally certified under UDIA’s EnviroDevelopment program, 23 of these in WA.

UDIA WA chief executive Allison Hailes said the program had continued to gain momentum since launching in WA in 2009.

“The last 12 months has seen a record number of projects using the standards to help define development project outcomes and deliver initiatives that support the environment and the local community,” Ms Hailes told Business News.

“More of the participating projects are recognising that it is a valuable communication tool and integrating the EnviroDevelopment branding and buyer education about sustainability into their sales process and new resident welcome packs.

“This will further grow the EnviroDevelopment brand so that eventually, it will become a household name.”

Ms Hailes said sustainability was now one of the top five factors in buyers’ decision making.

“We’re seeing an expansion in the types of development projects looking for certification, with growth in apartment developments, seniors living, industrial and retail projects,” she said.

LandCorp’s Parkside Walk development in Jolimont is the first to be certified under the EnviroDevelopment multi-unit residential standard in WA.

Upon completion, the development will cater for up to 350 dwellings including townhouses, apartments and single residences.

Through these, he said, residents had the potential to reduce their water consumption by 40 per cent per dwelling, while the installation of a 1.5-kilowatt solar power system was anticipated to result in a 34 per cent saving when compared with a standard Perth home, saving an estimated $400 on utility bills each year.

In another first, LandCorp’s Shoreline project in North Coogee, a former industrial zone, was the largest mixed-use development in WA to achieve EnviroDevelopment certification.

Meanwhile, the agency’s 1,150ha Rockingham Industry Zone is the first WA industrial estate – and the largest, and the third in Australia – to achieve the certification (in four of the six elements).

As a result of enforced energy efficiency initiatives, buildings within the estate are expected to consume 52 per cent less energy than a standard industrial development.

The Green Building Council of Australia is currently advocating the need to strengthen energy standards in the National Construction Code.

Chief executive Romilly Madew said the energy requirements in the code were last updated in 2010 and there was currently no plan to increase energy standards in the NCC for the scheduled 2019 update.

“Our residential and commercial buildings represent almost a quarter of Australia’s emissions and over half of the electricity demand, yet they have the potential to reach zero carbon through existing, cost effective technologies,” she said.

“Government support can lower the cost of technologies and drive industry capacity.”