A Committee for Perth report compiled by Ipsos made waves last month when it found nearly a quarter of residents would describe the Western Australian capital to visitors as ‘average’, ‘boring’, ‘dull’ and ‘parochial’. 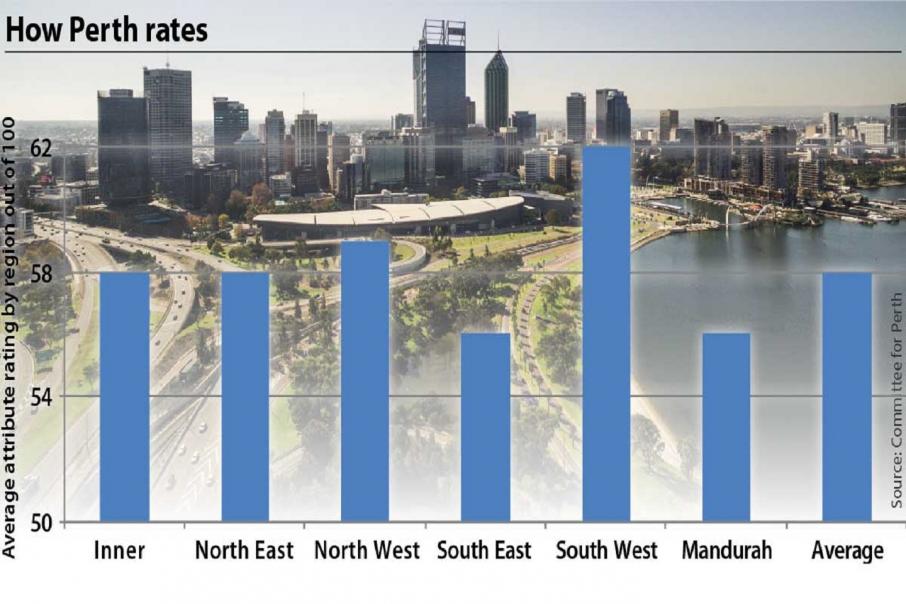 Residents from Mandurah and Perth’s south-west hold starkly different views when it comes to the city’s positive and negative attributes. Photo Gabriel Oliveira

A Committee for Perth report compiled by Ipsos made waves last month when it found nearly a quarter of residents would describe the Western Australian capital to visitors as ‘average’, ‘boring’, ‘dull’ and ‘parochial’.

This was despite the largely positive views of Perth held by those who live outside WA, with non-residents surveyed favouring the city above Auckland and Singapore.

The data showed that Perth’s residents would recommend the city as a place to live, visit and work, saying its natural environment and high quality of life were its strength.

However, Perth residents were less likely to recommend it as a place to study and invest, with the city’s business influencers seen to be underperforming compared with other cities surveyed.

Consistently across the survey, residents perceived Perth to be weak on measures of investment, employment opportunities and innovation, which ran contrary to opinions held by outside investors, who the survey found were more likely to recommend the city as a place to invest.

While Perth’s residents consistently gave low ratings to the city’s business, innovation, employment and investment opportunities, data released exclusively to Business News shows those views are not uniform across regions.

According to ratings of Perth’s attributes by region, negative and positive perceptions of Perth are divided, with the city’s western suburbs consistently holding a more positive view of the city than its exurban residents, who were more consistently negative in their outlook.

Nowhere was this disparity clearer than in Mandurah, where residents surveyed consistently ranked Perth’s quality of education, commute, and employment lower than residents in other regions.

Conversely, Perth’s south-western suburbs were more likely to perceive the city as being more attractive, economically prosperous and culturally diverse and vibrant, holding a more favorable view of the city than other regions on nine of 22 attributes surveyed.

On measures of quality of life and education, Mandurah and south-western residents were split, supplying the lowest and highest ratings for those attributes across all regions.

Committee for Perth chief executive Marion Fulker said those views likely reflected a lack of opportunity in those areas, as well as a possible disconnect from the city as a whole.

“We know that there are high levels of youth unemployment [there] and it’s been stubbornly that way,” she said.

“In a Mandurah context, I think [residents] see Perth as much more of a central-city location.”

“In the south-western suburbs, though, you wouldn’t have as many people living pay cheque to pay cheque, worried about job security or re-employment.”

While divisions across regions could be attributed to economic opportunities, opinions on attributes such as employment and investment often aligned with proximity to the CBD.

While inner-suburban residents were less likely to think Perth was culturally diverse, vibrant or respectful of its first people, they were more likely than others to say it was technologically advanced and had better employment opportunities.

Similarly, residents in the north-east viewed the city as worse when it came to transport as well as economic opportunities, while those in the north-west thought the city was more innovative and had better roads than elsewhere.

“I think it suggests an inequitable society,” Ms Fulker said.

“There was a sense that if you were in the mining boom in 2015, you were feeling fantastic, and if you were outside of it, your cost of living was going up … and you weren’t benefiting.

“Although there had been unilateral job layoffs in 2018, people wanted to know if their job was secure and if they were going to be next on the chopping block.

“I’m not sure those are the conversations being had in the western suburbs.”