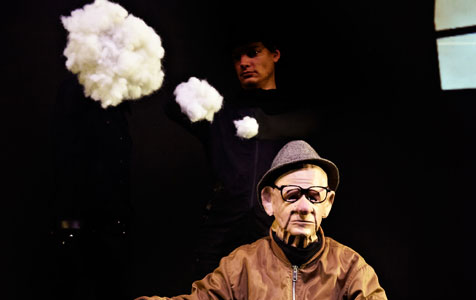 SERIOUS MESSAGE: The set design and puppets used in It’s Dark Outside.

Perth-based artists are making an impact at home and abroad by pushing the boundaries in both the content and delivery of contemporary theatre and dance.

Weeping Spoon Productions founding member Tim Watts recently took his place on the international stage with his one-man puppet show, The Adventures of Alvin Sputnik: Deep Sea Explorer, which combines mime, animation and live music to present a love story set at the end of the world.

The production was seen by audiences throughout Australia, the US, India and South Korea.

Now, Mr Watts’ latest work, It’s Dark Outside, is playing for a limited season in Perth.

Award-winning artists Arielle Gray and Chris Isaacs join Mr Watts in a performance combining puppetry, animation and live theatre in a surreal portrayal of the effects of dementia.

Commissioned by the Perth Theatre Company, It’s Dark Outside has appeared in the Sydney Festival as well as the Edinburgh Fringe Festival, and will next be travelling to Pittsburgh in the US for that city’s international arts festival.

Weeping Spoon Productions is an independent theatre company and has been in operation since 2005.

Meanwhile on a bigger stage, Ausdance WA is due to present Men of the Red Earth – the second of three contemporary dance programs in the Future Landings series.

Together, the professionals and the locals compose an all-male dance performance that introduces audiences in remote areas to this non-traditional style of dance.

The pilot program took place in 2011 in Busselton, Bunbury, Denmark and Albany, with Men of the Red Earth to be developed in the Pilbara.

Ausdance WA is part of the Ausdance national network established in 1977 to act as a support base as well as education platform for Australian dancers.