A chance discovery many researchers may have dismissed as an error has brought about a series of surprising and rewarding events for University of Western Australia PhD student Callum Ormonde. 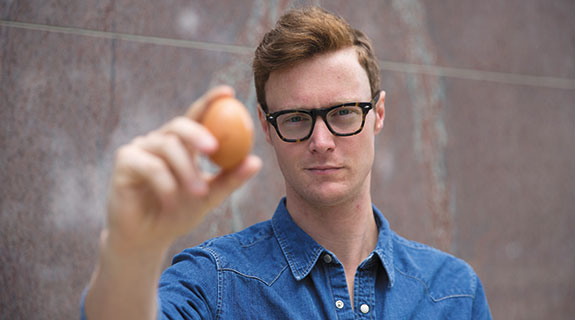 CRACKED IT: Callum Ormonde has learned how to unboil an egg, and in doing so helped revolutionise a cancer fighting technique used by drug manufacturers. Photo: Attila Csaszar

A chance discovery many researchers may have dismissed as an error has brought about a series of surprising and rewarding events for The University Of Western Australia PhD student Callum Ormonde. 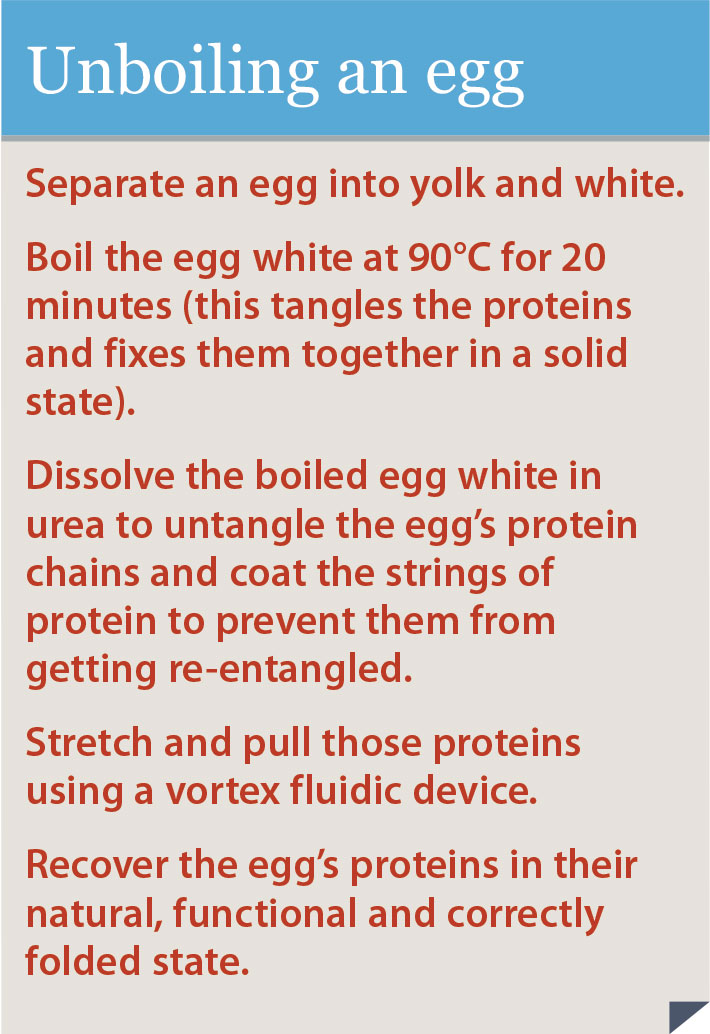 Most notable among these outcomes is a technique scientists are now testing to vastly reduce the amount of time and money needed to create cancer-fighting drugs.

That discovery emerged after Mr Ormonde decided to see what happened when he inserted the boiled white of an egg into a vortex fluidic device created by former UWA professor Colin Raston.

The VFD has the ability to ‘reverse entrophy’, meaning it can uncoil proteins by spinning the molecules at up to 5,000 revolutions per minute, returning them to their ‘natural’ state.

The key discovery in which Mr Ormonde was involved is a new way to fold proteins using the VFD.

Research teams led by Professor Raston (who has since moved to Flinders University) and University of California Irvine professor Gregory Weiss have used Mr Ormonde’s finding to develop a cheaper and more efficient protein-folding technique.

The research is expected to have significant applications in the development of drugs to target cancer, principally because proteins are at the forefront a cell’s journey to becoming cancerous, to form tumours and spread within the body.

Mr Ormonde said the discovery was quite unexpected.

“We proposed we would use this new machine that at the time was only being used for chemical synthesis with things like graphene sheets from carbon, and never before with proteins and life-based things,” he said.

Mr Ormonde said it was an “incredible realisation” when he saw the VFD was folding the protein. Nine months’ of tests revealed the technique could be used to vastly optimise protein-folding techniques used in cancer drug manufacturing – from a period of days and weeks to just minutes.

“Those first results that came out ... I thought I’d broken the machine. This never happens. It was so unexpected that it was almost unbelievable,” Mr Ormonde told Business News.

Mr Ormonde, who is toying with moving to California to continue research at UC Irvine, said he now used public speaking opportunities such as his recent appearance at TEDxPerth to urge people to really question the outcomes they were seeking, because sometimes success could emerge from what may originally have been thought of as a mistake.

“Some of the best stories actually come from failure,” he said.

For his work in creating the VFD, Professor Raston was awarded an Ig Nobel Prize, a light-hearted version of the Nobel Prize awards, while Mr Ormonde and the other members of the research team also received the award.