How will the state’s construction industry navigate the growing pains prompted by a surge in building activity? 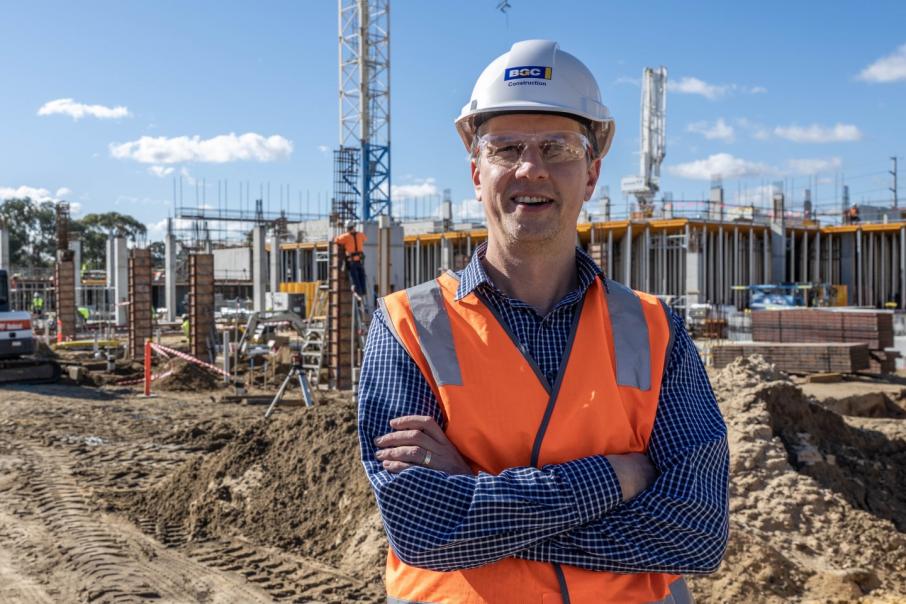 Construction companies are playing catch-up, and struggling with skills shortages and supply chain disruptions, as the sector bounces back from a period of stagnation due to COVID-19 lockdowns and border closures.

And the current uptick in activity is showing no signs of slowing, at least in the short term.

The Australian Construction Industry Forum revised its 2021 forecasts, off the back of the country’s strong economic performance through COVID, projecting growth of 2.7 per cent for the sector nationally, bringing the anticipated level of building and construction work up to $243 billion in 2021.

In Western Australia, while the construction work is diverse in its spread of property markets, the bulk of the work has been awarded to multinational Multiplex Constructions, solidifying its position as the state’s largest construction company for the seventh consecutive year, according to Business News’s Data & insights.

Key Multiplex projects include the $800 million Karrinyup Shopping Centre redevelopment, Chevron’s new headquarters at One the Esplanade in Elizabeth Quay, and Blackburne’s two major apartment projects, One Subiaco and The Grove.

All projects have broken ground in the past 12 months.

The residential apartment market is contributing to the bulk of WA’s construction order book.

According to the RLB Crane Index, the residential sector represented 50 per cent of all major works (15 cranes) across Perth, a segment Multiplex has strategically targeted in recent years.

Projects in the health and education sectors have also provided significant construction work during the past 12 months, led by stage one of the Murdoch Health and Knowledge Precinct, which is also contracted to Multiplex.

Mr Palandri said Multiplex was now seeking to win building work (not infrastructure or submarines) in the defence sector.

“A lot of the defence work is done by a very small number of contractors,” he said.

“And considering the amount of money defence is spending, and in terms of diversifying our workbook or dealing with the highs and lows of the commercial building sector, it just makes sense for us to be having a look at that segment of the market.”

“The state government, while they’re [spending] significantly in Metronet and the like, and in infrastructure works … you’re not really seeing the government spending a lot of money in the commercial sector.

“The housing market will start to come off a bit now the stimulus is starting to unwind, and the housing industry starts to deliver out its pipeline.

“That’s a challenge and an opportunity.”

“When this happened in 2010, we were getting a lot of labour from the eastern states and the UK,” he said.

“Now neither of those options is available.”

State and federal government housing stimulus grants and stamp duty concessions for off-the-plan apartments, along with infrastructure works that had been brought forward to boost economic recovery, had created the perfect storm, he said.

Earlier uncertainty prompted by lockdowns, as well as ongoing border closures and migration restrictions, had compounded labour problems, with employment in building and construction activities falling by 2.6 per cent by the end of 2020, according to ABS employment statistics.

“We recently had a catch-up with the premier; what we’re saying is that, as much as we support local trade ability and supply, local jobs are important,” Mr Gelavis said.

“We have to start to consider how to access the international global employment market.

“Overseas migration is very important for that, so we need to start considering things like quarantine facilities.”

Looking at the future talent pool, a top-up of overseas workers will likely be needed.

Data from the Construction Training Fund shows there were 548 WA-based trainees as of June 30 2020, with apprentice commencements in construction up 5.6 per cent compared to numbers from the previous financial year.

Shortages in structural timber and steel had pushed up prices, with Wesfarmers reporting a 20 per cent increase in local lumber prices. 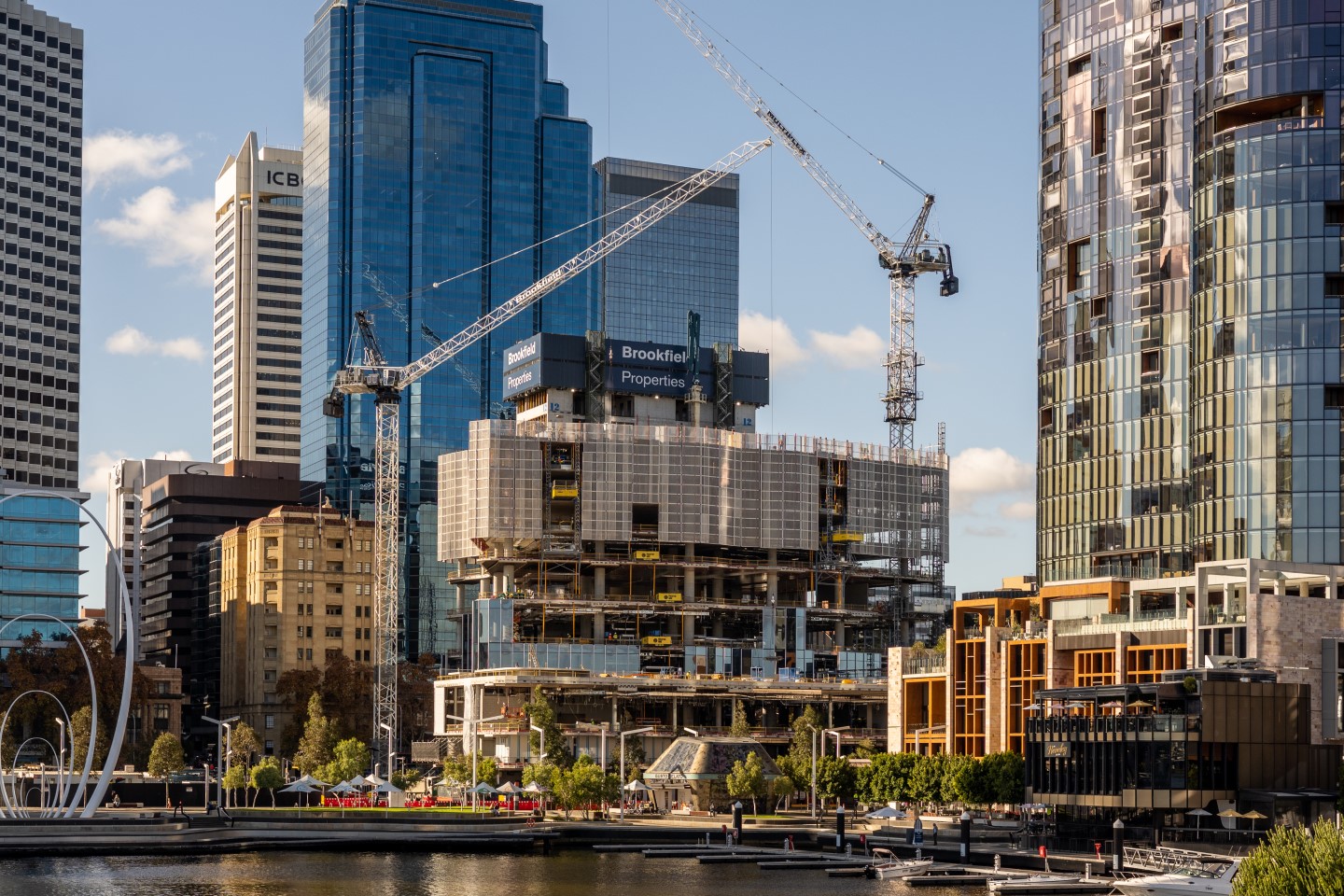 Multiplex is progressing works at One the Esplanade, Elizabeth Quay. Photo: David Henry

Mr Palandri pointed to One the Esplanade as an example, with more than half of the building’s 4,000 façade panels, of which there is a national shortage, already in WA due to the business pre-purchasing stock during the pandemic’s early stages.

Builders without that ability to pre-purchase materials have taken a different approach.

That includes national business Built, which is ranked 10th on the Data & Insights list of WA’s largest construction companies.

Built director Jon Stone said rather than halt projects due to material delays, such as façades and glass balustrades, the group had resequenced projects to satisfy delivery timeframes.

Typically, he said, those elements would be installed prior to building access. However, the group had put temporary measures in place to make projects water-tight and continue with work such as internal fitouts.

“With COVID, there are a lot of businesses that have suffered,” Mr Stone said.

“But those that have looked to react to COVID in a way that’s reshaping the way they think [have done well].

“One of our advantages is diversification.

“We can’t just pigeonhole ourselves into one specific sector.”

Built has also been involved with apartment, health, and education projects, tendering for a range of works including new builds, internal fitouts, and heritage restorations, including upgrade works at His Majesty’s Theatre, now under way.

“In WA you have to be nimble, because from a sector point of view, those sectors have a lifespan which sometimes comes to an end depending on the economic climate,” Mr Stone said.

“What’s important is that we are only as good as our supply chain, our subcontractors. It’s about ensuring we have a good outlook of work and we’re giving the subcontractors enough time to also pre-plan their workload and workforce.”

Mr Stone said the Perth market was facing a flight to quality, with developers increasingly seeking contractors that had a strong balance sheet and good subcontractor relations.

For BGC Australia, repeat business and the group’s materials businesses have proved particularly worthwhile in navigating the past 12 months.

BGC Construction general manager David Dodds said having divisions dedicated to manufacturing concrete, cement, plasterboard, and bricks, had made it easier for the business to predict and manage shortages effectively.

“The main reason for that is that it aligns with our vertically integrated business. A lot of big apartment projects have a lot of materials that go into them … concrete, cement, plasterboard, and BGC is involved in the manufacturing of all of those.

“It’s definitely forecast as a growth sector … we’ve developed really strong relations with all major developers; we like that repeat business model.

“It’s a tough industry, so it’s nice when you win a project based on relationships as opposed to being the cheapest builder out there, which is often the case.”

A race to the bottom to win tenders, as well as unexpected price increases, are believed to have contributed to the collapse of Pindan, which was until recently the state’s second largest builder.

Pindan’s demise has since accelerated legislation aimed at improving the security of payments in the industry.

Mr Dodds said price volatility would remain an ongoing concern for the year ahead.

“Our immediate focus is projects with a short lead-in time,” he said.

“For us to be committing to a price on a project that’s only going to be going to construction in three or six months’ time is very difficult.

“Some tenders are valid for 14 days for our subbies and we’re expected to hold our price for six months or whatever [it might be], so it’s very challenging.

“We can build-in some factors in terms of price escalation, but it’s difficult to know exactly what is going to be happening; it goes back to those relationships.

“From a client’s perspective, that early engagement process is so important because apartment developers now need to be getting their feasibility uplift correct.

“While they might be able to sell their apartments for more, construction costs are increasing so they’ve got to manage that process well.”

The housing stimulus measures had also reduced the pool of commercial subcontractors, Mr Dodds said, with many involved in smaller commercial projects now shifting into the residential space.

“That’s leaving a glut in the smallto- medium market of commercial,” he said.

“A market upturn is sometimes more difficult to navigate than a downturn, so builders have just got to go in eyes wide open.”

Edith Cowan University’s city campus is one of the largest commercial contracts coming to market.

Mixed-use residential developments driven by the private sector will likely continue to provide the bulk of building work in the long term off the back of several municipalities having reviewed planning frameworks to accommodate more density, as part of the state government’s push for infill projects.

That includes new precinct plans for Leederville, Subiaco, and Nedlands, where Grange Development Consulting and Costa Property Group’s $320 million apartment development at 97-105 Stirling Highway was given the green light in February and is yet to appoint a builder.

Long term, Perron Group’s $1 billion, 20-year plan to develop a new town centre for Cockburn, involving the redevelopment of the Cockburn Gateway Shopping City centre, as well as the construction of several new residential and commercial buildings, presents another opportunity for contractors.

The development is expected to be assessed for planning approval in the coming months.

Large retail projects could also provide a boost to the construction workforce, although uncertainty hangs over delivery timeframes.

Westfield has deferred its major centre redevelopments, including Innaloo, and plans to redevelop Carillon City into a retail and commercial precinct in the CBD were put on pause last year.

Property Council of Australia WA executive director Sandra Brewer said a healthy supply of work was a future challenge for the sector, to ensure the labour force had the confidence to grow to meet current demand but also be sustained long term.

“There is an opportunity for government to consider slowing the timetable of non-essential state government projects currently being considered to relieve labour market pressures for the private sector,” Ms Brewer told Business News.

“As is the case with all industries, future demand is still subject to many significant unknowns, and creating a stable pipeline of construction projects will be crucial to WA’s success as the world recovers from the impacts of COVID-19.”