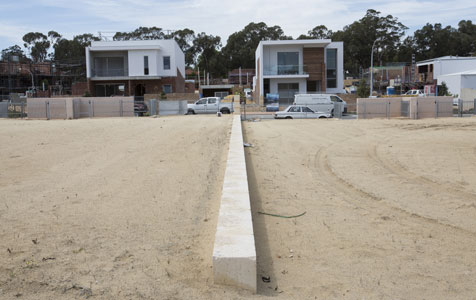 Supply constraints are hampering land sales across Western Australia, which have declined significantly in both the metropolitan area and regional centres, the Housing Industry Association says.

The HIA-RP Data quarterly land sales report showed the volume of vacant land transactions in Perth has fallen substantially over the past 12 months, with sales down 6.3 per cent in the three months to the end of June and the latest level of activity coming in 30.5 per cent lower than the same time last year. “Perth’s land market is showing all the hallmarks of severe supply bottlenecks,” the HIA said.

“New home building in WA is at record levels, yet the number of lots sold in Perth continues to decline.

“At the same time, price pressures are considerable and lot sizes are getting smaller over time.

In regional WA, the Kimberley was ranked as one of Australia’s most expensive regional markets for residential land, but it was also the weakest market overall for sales.

The report showed Kimberley blocks had an average value of $376 per square metre, making it the third most expensive regional market in the country by that measure, behind Queensland’s Gold Coast and Sunshine Coast.

However, sales activity in the Kimberley was down 73 per cent over the six months to June 2014, the HIA said.

The Kimberley was one of many regions that experienced falling sales due to reductions in resources sector activity.

Other mining markets showing falling sales included South Australia’s Murray Lands, which experienced 41 per cent less sales over the six months to June, and Queensland’s Fitzroy and Mackay, which both had a 40 per cent reduction in sales transactions.

Across other WA regional markets, land sales also fell markedly during the first half of the year, the HIA said. “In some areas, this likely reflects land supply constraints,” the report said.

“However, the downturn in mining activity is the single biggest driver of reduced throughput in the state’s regional land market.”