Sunny side up for jobs - SPECIAL REPORT

Our annual Biggest Employers feature has the latest BNiQ data on employment trends in WA, including the companies that are expanding and those that are shrinking, and in-depth analysis of what's happening in mining, construction, health care, accounting, law and other industries. 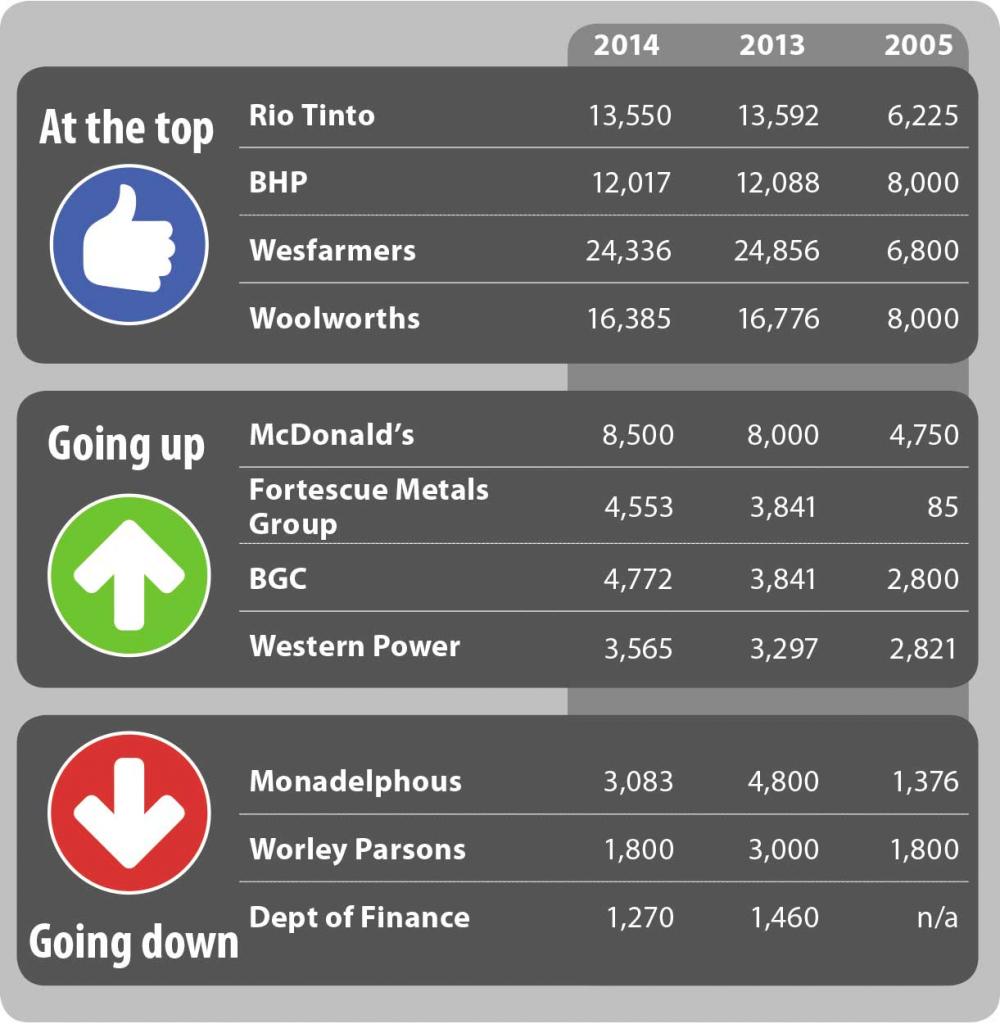 Major employers in Western Australia have a bright outlook for the medium term despite the current mining gloom, as the shift from the resources boom enables other sectors to capitalise on the state's economic expansion.

The mood is particularly positive in the services sector, with retail trade, health care and social assistance, and professional, scientific and technical services all experiencing double-digit employment growth in the past 12 months. 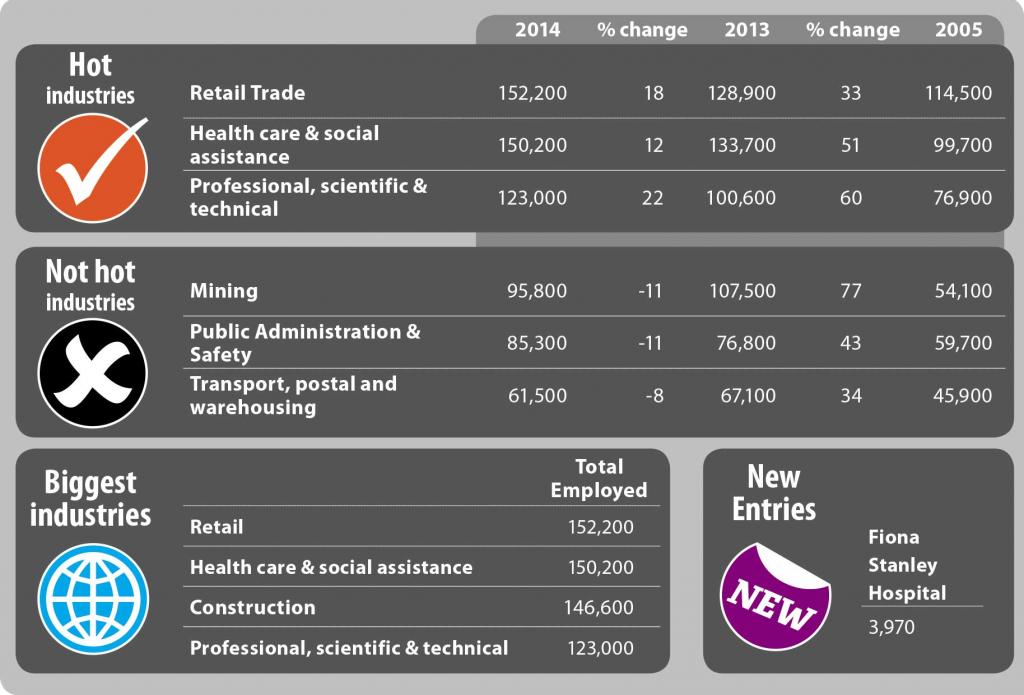 Those sectors created more than 60,000 new jobs in WA, according to the Australian Bureau of Statistics, making them the major beneficiaries of sluggish demand for labour in the resources sector.

The cooler labour market is proving beneficial to firms working in non-cyclical industries, which are experiencing fewer wage and staff retention pressures.

Chandler Macleod chief operating officer Tania Sinibaldi said those who had transferable skills and were prepared to be flexible were being hired in these sectors.

“The softening of the resources sector has seen an increase in the availability of skilled talent in the market,” she said.

The bullish medium-term outlook isn’t confined to health-related industries, however.

"At five per cent, WA has the lowest rate of unemployment of all of the states, while our headline employment growth rate of 3.1 per cent in the year to September is almost triple the rate seen in the national economy (1.1 per cent)," he said.

"CCI’s September Westpac-CCI Survey of Business Expectations showed just under nine per cent of firms believed labour was ‘scarce’ in Western Australia, just above the record low seen in the June quarter.

"At the peak of the resources investment boom, some 45 per cent of businesses reported labour was difficult to find, while prior to the Global Financial Crisis almost three quarters of businesses found labour was ‘scarce’.

"Wages growth across the state has slowed to just 2.4 per cent in the year to June, its lowest rate since December 2000, providing much welcome relief for WA businesses after over a decade of strong growth."

Crown is pushing ahead with its Crown Towers development despite short-term softness in the hotels market, as the final stage of a more than $2 billion expansion plan. 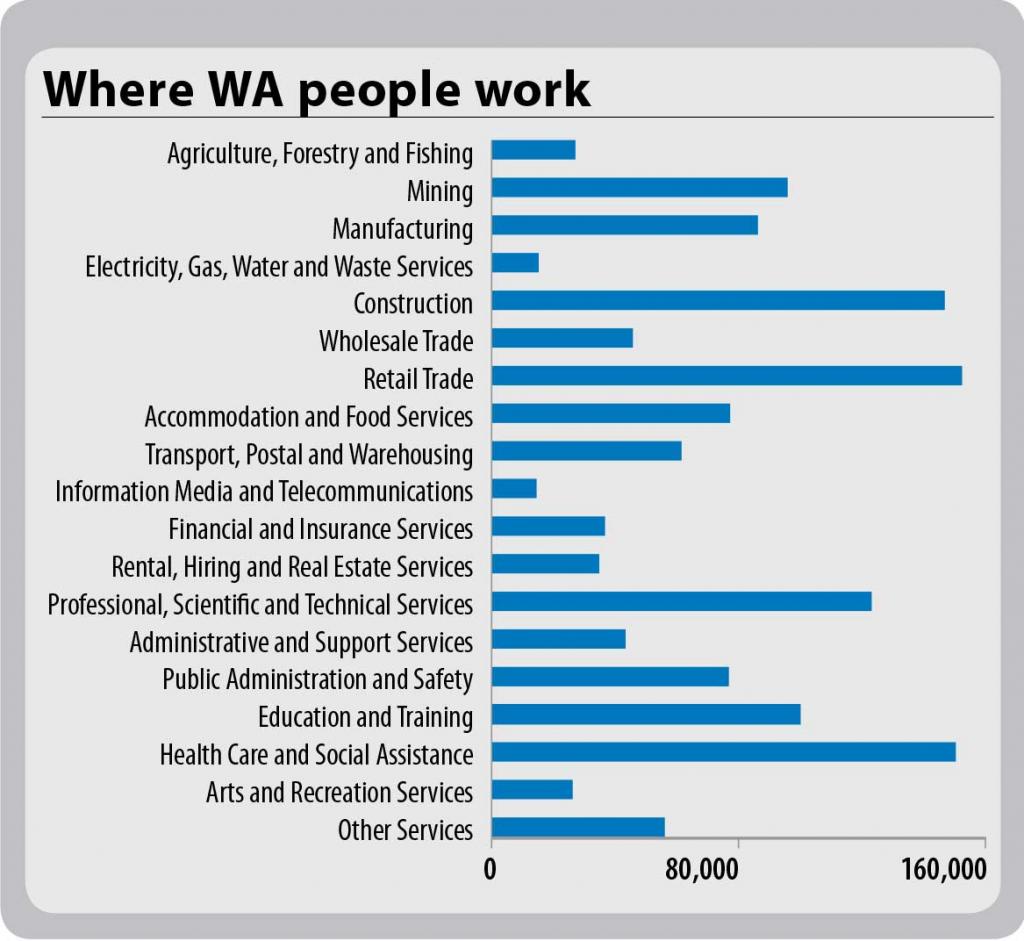 “It’s not as aggressive as it used to be.”

Mr Feldstead said Crown had a clear mandate to grow the business, with staff growth largely driven by hospitality – evidenced by the precinct increasing from nine restaurants and bars to 31.

QSR operates 70 Red Rooster, Chicken Treat and Oporto stores in WA, with expansion plans in train for next year.

Mr Coombe said the affordable food business was not as cyclical as many other industries, and that the company felt the outlook was positive.

QSR had struggled to find qualified employees during the recent mining boom, he said, but that was changing as activity in the resources sector waned.

The retail trade sector hit a record 152,500 employees in August, the first time it had passed the previous record set in February 2009.

This was despite slow spending growth in the past 12 months, up only 1.5 per cent.

Woolworths and Wesfarmers were stable over the past year, but both have grown substantially since 2005, with Woolworths doubling and Wesfarmers more than tripling its employee numbers, in large part thanks to its acquisition of Coles.

Construction employment also fell, by 13,000, in the six months to February 2013, but has recovered quickly to a total of 146,600 – a comparable number to that of August last year.

Hays Recruitment regional director Chris Kent said much of the rebound in construction numbers was due to the uptick in residential property.

“There’s been a significant upswing in residential property,” he said. “There’s up to 48 apartment towers either in construction or in planning for the inner areas of Perth.”

In the resources sector, Mr Kent said, there had been personnel movement from construction to the production and export areas during the past two years.

Resource extraction is less labour intensive, leading to an easing in mining employment as production accelerates.

With just over 1.3 million employed people in WA, Rio Tinto Iron Ore employs 2 per cent of the state’s workers, with BHP Billiton close behind.

This comes despite anecdotal and reported evidence of job cuts by the two companies in the past year, suggesting contractors have worn the brunt of the pain.

It was followed by Monadelphous, which scaled back to 3,083 staff.

Since 2006, both Rio Tinto and BHP have grown substantially, with Rio more than doubling in size and BHP up 50 per cent.

Woodside Petroleum, which recently announced staff reductions through to 2016, is also around 50 per cent larger when measured by employment.

Macmahon Holdings, BGC and Monadelphous are each larger, while 9th ranked Fortescue Metals Group was not a member of the list.

That’s a reminder of how far this state has come in a decade. 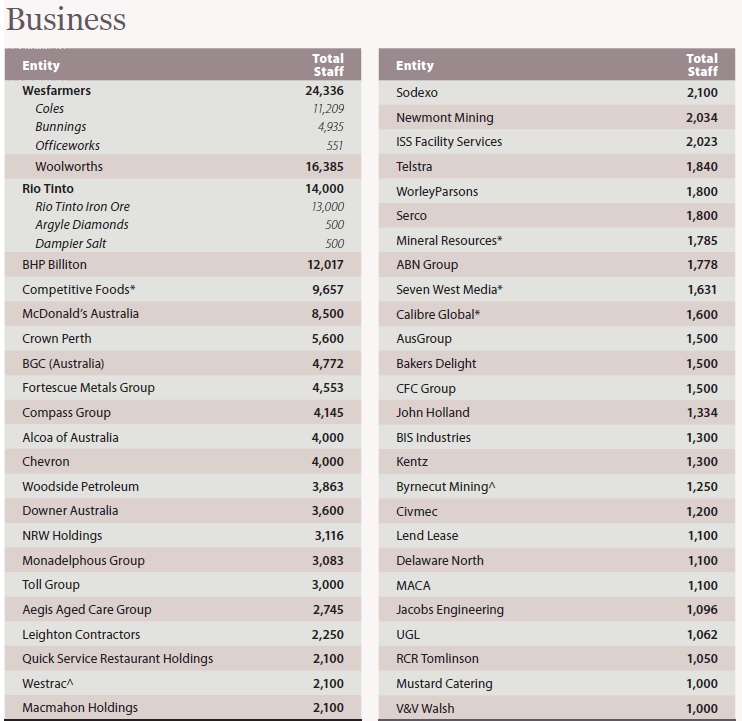 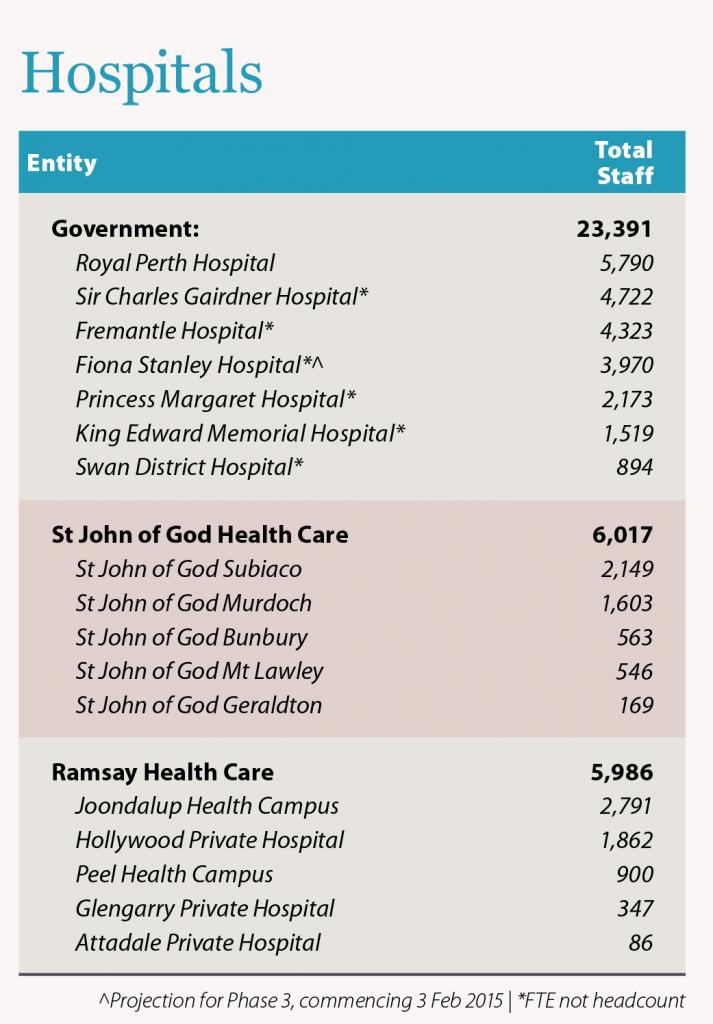 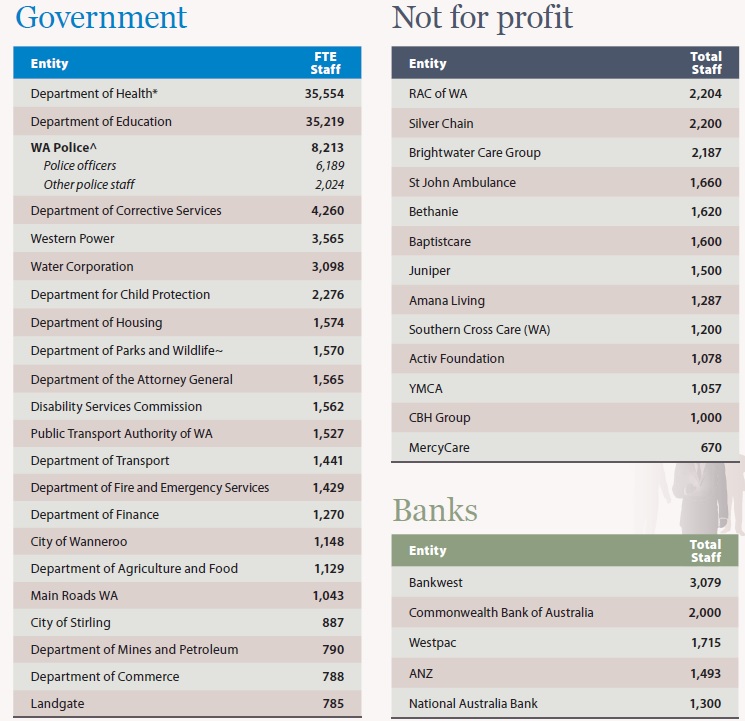