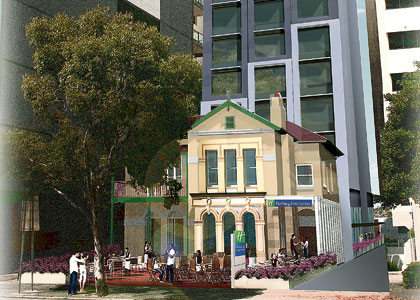 CONSTRUCTION giant BGC is poised to bring another hotel development online in the Perth CBD.

Perth-based property developer Sunfire Asset said it was in exclusive talks with BGC to construct a new $35 million hotel at 257 Adelaide Terrace, with work on the detailed design of the 20-storey development and the two-storey 1880s-built house currently under way.

Sunfire, owned by Ralph Nunis and Lee Lee Do, has secured InterContinental Hotel Group to manage the 224-room hotel, which will be branded as ‘Holiday Inn Express’ and will be the first in Australia.

The brand takes a no-fuss approach to accommodation that features a ‘grab & go’ breakfast, self-service facilities including laundry, and free Wi-Fi.

BGC has not been finalised as the contractor for the hotel, with exclusive negotiations ongoing, Mr Nunis told WA Business News.

Twin Ocean Property is the project manager for the hotel. Construction is expected to start mid this year and the hotel is slated for an early 2015 opening.

Previously a $30 million, 18-storey hotel development comprising 187 rooms was proposed for the 257 Adelaide Terrace site by George Papamihail and Phung Tran Do, who is part of the related family parties that make up Sunfire.

Mr Papamihail is no longer involved with the development.

BGC is also working on plans to develop a hotel at the former FESA House site on Hay Street, having been selected late last year as the preferred proponent by the state government under the hotel development incentives package.

The hotel will be managed by global company Starwood Hotels and Resorts, which holds a number of hotel brands including Sheraton, Four Points by Sheraton, and Le Meridian.

BGC is proposing a minimum 300-room hotel on the site and at least 30,000 square metres of commercial space.

Both hotel projects add to the growing list of recently completed hotels and planned or proposed developments in the Perth CBD area, which has the highest hotel occupancy rate in the country at just over 85 per cent.

The state government estimates that an extra 1,900 hotel rooms will be needed by 2020 to stabilise the local market, with average room prices tipped to hit $259 a night by the end of 2015.

Crown will spend $568 million to develop Perth’s first six-star hotel at Burswood, while  the redevelopment of the Old Treasury Building will include an Aman Resorts’ hotel.

Hotel chain Oaks is planning a 15-storey, 88-room hotel for Wellington Street, facing the City Link project, which the government has also indicated could include a hotel development.
Old Perth Port has proposed an 11-storey, 230-room hotel next to the Bell Tower, while suggestions have been made to include hotels at the Elizabeth Quay and Waterbank developments.

The boutique Terrace Hotel opened last year, while Fraser Suites was the first major hotel to open in Perth in six years. The Murray Hotel is currently expanding its 30-room offering to 110 rooms across four levels.