The effectiveness of Perth’s transport network has been blighted by ideology. 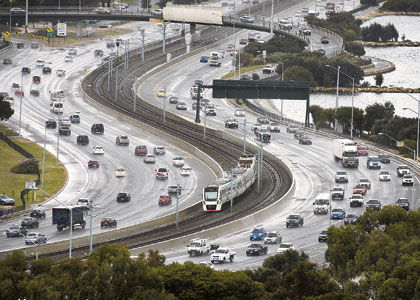 NEW ROUTE: The change of direction of the Perth-Mandurah rail line cost an extra $50 million for a tunnel under the CBD and to reconstruct bridges and the Kwinana Freeway busway. Photo: Grant Currall

The effectiveness of Perth’s transport network has been blighted by ideology.

SOUND judgement can be horribly distorted by ideology, particularly when any new ‘group-think’ is conceived without mathematical rigour.

The 2001 decision by the Gallop government to change the route of the Mandurah train line and redirect it down passenger-less river foreshores was one example, driven by an ideological belief that high-speed trains would force cars off the roads.

Then transport minister Alannah MacTiernan evaded the safeguards of statutory due process using the excuse of ‘saving time and money’.

Consequently there was no: (i) scrutiny by the Environmental Protection Authority; (ii) three-month public display of the proposal and receipt of wholesome scepticism; or (iii) debate by both houses of parliament.

The change of direction was to eventually cost an extra $50 million for a tunnel under the CBD and to reconstruct bridges and the Kwinana Freeway busway.

It was to bypass existing suburbs through Canning Vale to Kenwick along the line of the original route to Perth, and was substantiated on the nonsense mathematics of modelling called Spectre 2.

Spectre 2 claimed to prove that there would be an increase of 40 per cent in train patronage from new commuters, attracted by the 12 minutes saved by the direct river-views route to Perth. Most of these passengers would originate from the Rockingham and adjoining area catchment. This was always a demographic impossibility.

CBD white-collar workers don’t live in that catchment. It predominately houses workers in heavy and marine industry, service trades, light industry and local retail. And the new route was to brutalise foreshores on the Canning and Swan Rivers and negate forever the option of repairing the mess made of Perth’s previously beautiful iconic reflecting basin at the foot of Mt Eliza.

No longer would it be possible to remove the surplus-to-need landfill and mediocre landscaping. It is still there ... an ugly testament to the lack of respect “for the life giving beliefs and conduct that is evidence of civilisation”, to quote Lord Clark’s BBC series, Civilisation.

Fundamental to public transport is that: there will be a complete spread of the origins of commuters, (workers, students, spectators); and that the demographic pattern of their destinations will loosely circumscribe the CBD hub wherein the one-fifth who are white-collar workers are employed.

Also, while about one-fifth are CBD workers, the remaining four-fifths work in health, primary and secondary industry, construction, service trades, hospitality, warehousing, communication and education which attracts tens of thousands of students also heading to locations in postcodes wagon wheeled around the CBD.

The previously completed Kwinana Freeway Busway had been ideal for self-loading buses, especially new-generation, low-emission hybrid or gas-powered go-anywhere buses (compared to Collie coal-powered electric trains). Trains are bus and car fed from station car parks and reliant on inflexible fixed rail to a terminus in the CBD.

Articulated buses are able to carry 100 commuters travelling at busway speed of 100 kilometres an hour at safe intervals down to, say, 0.25km spacing. That’s 40,000 passengers per hour, with pick-up at origins anywhere and able to deliver to postcode destinations where the mathematics of demography indicate.

Metropolitan trains – by the very nature of their fixed rail terminus and reliance upon choc-a-bloc station car parks to feed them – are only really any good for inter-regional line haul travel.

How does inefficient railway ideology prevail, as it did with the consequential disregard for Perth’s environmentally most sacred cows, with a permanent payout of at least $250 million per annum including interest and depreciation to operate the $1.75 billion Mandurah train infrastructure when, by comparison, it would have cost $10 million to have retained and operated the self-loading busway?

This would require a platform that stretched from the Narrows Bridge off-ramp to halfway through Northbridge, exclusively for commuters to postcode 6000.

The current Mandurah trains, packed tightly carrying 40,000 passenger per day, are about 125 metres long and move 800 commuters at 15 trains per hour during peak hours – from station car parks so widely spaced that the 130km/h electric engines will stay cool and not seize. So much for voodoo sustainability.

The end result is a sort of reverse of affirmative action ideology, where 80 per cent of commuters have no option but to add to road traffic congestion compared to 20 per cent heading to the CBD; it’s called gridlock.

Premier Barnett worries that there are up to 50,000 extra commuters who drive out of northern suburbs to fight their way on to the Mitchell Freeway-Joondalup line train. WA Business News  (December 8 2011) reported that the premier thinks that a new light-rail train is the answer.

However, the response to this critique by one of the premier’s transportation acolytes was subsumed by ignorance of workplace demography and fixed rail limitation.

The response was that ‘‘40,000 Mandurah train passengers per day equated to 200 bus services per peak hour; but that’s rigid 60-person buses spaced at 500 metres on a 100km/h busway. So what’s the point? We know that self-loading articulated buses on a busway can achieve 40,000 persons per hour using terminus-docking bays or on a circular outer postcode route.

Perth could replace its $250 million yearly Mandurah-to-CBD millstone using self-loading buses, which after the first 18 minutes of the first hour of peak travel exceed the performance of the 130km/h, four-minute-frequency, choc-a-bloc, station-fed trains.

The report quoted above overlooks the maths that a 100km/h busway would need to space buses out to 5km to arrive at three-minute intervals; that’s the distance from Canning Bridge to the Narrows.

This city suffers from ideological and mathematical sloth. Built-environment CBD decisions have been crass and resort to reaction determination taken to the point of obstinacy.

Witness Premier Barnett’s determination to jeopardise existing investment in CBD high-rise buildings that will lose their river views when the Elizabeth Quay project is completed. Riverside Drive commuters “will deal with the congestion”, says the premier; however, about 75 per cent of all east-west traffic is cross-town intra-regional with no alternative than the Polly Farmer Tunnel.

Perth planners and acolytes are not Cartesian, which is the French adjective for being logical, dispassionate and cost effective. The word derives from their great philosopher and mathematician Descartes, “I think therefore I am”.

As demography expert Bernard Salt wrote in WA Business News (December 15 2011): “It is almost like (you) need a body independent of politics to determine the most efficient, logical and fair minded way to achieve (metropolitan) infrastructure for an expanding Perth”.

I believe that means a new version of the 1950s strategy for Perth, sans sustainability, but with immutable statutory defence of the fundamentals of due process listed in my opening remarks, plus mathematical integrity in spades.