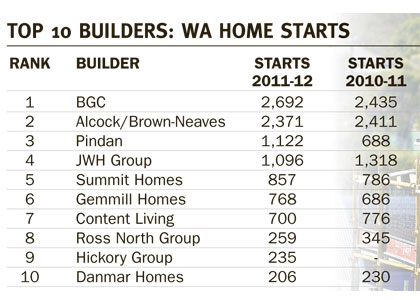 FIVE Western Australia-based homebuilders have been ranked among the nation’s top 20, with Summit Homes and Pindan making their debut in the top echelon of housing construction.

According to the Housing Industry Association’s Housing 100 report, released last week, Alcock/Brown Neaves group cemented its place as the second largest homebuilder in Australia with 2,736 starts, while BGC, which only builds in WA, rounded out the top three with 2,692 starts.

Scott Park Homes, which had 811 starts last year, declined to participate in the survey.

Metricon Homes cemented its spot as the nation’s largest builder for the second consecutive year, starting construction on 2,821 dwellings in 2011-12.

The largest 100 builders held a 35 per cent share of housing starts Australia-wide, up from 33 per cent in 2010-11, but below the historical average of 36 per cent.

Revenue earned from home construction by the top 100 builders is estimated to have fallen by 1 per cent to $13.47 billion.

Australia’s largest multi-unit builder was Melbourne’s Hickory Developments, which started 2,163 dwellings, up 8 per cent on 2010-11.

“The result is consistent with the overall experience of the industry in 2011-12, were new home building conditions weakened considerably across Australia,” Housing Industry Association chief economist Harley Dale said.

“Within an environment of subdued demand conditions, both unilateral and cooperative policy reform could generate a much healthier year for new home building in 2012-13.”