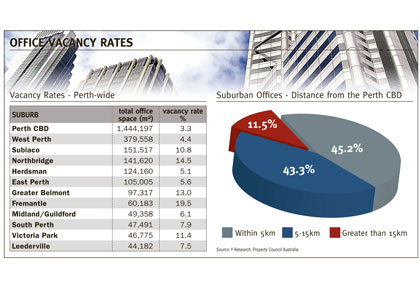 But they will have to undertake property upgrades and improve their standards to attract tenants from the CBD and West Perth, according to consultancy Y Research.

Y Research has released its first suburban office market report, which shows there is a total of nearly 1.5 million square metres of vacant office space across Perth’s suburbs, with an average vacancy rate of 11.7 per cent compared to inner city and West Perth, which have rates of 3.3 and 4.4 per cent respectively.

Y Research principal Damian Stone said there was a foreseeable shortage in city office space that would spill demand to the suburbs but that standards needed to be improved in the suburban market.

“With new developments across the city and the suburbs raising the bar on what tenants expect from competing stock, owners of older properties will need to look at the services they provide,” Mr Stone told WA Business News.

“That means upgrading to put in cafes that are of similar standard to new buildings and upgrading the services to the building too, lift services and air-conditioning are in most cases 10 to 20 years old and affect tenant satisfaction.”

According to the Y Research data, which was compiled after Mr Stone meticulously tread the footpaths and combed suburban streets to survey office buildings, 22 per cent of the total suburban office space is A grade, 26 per cent B grade, 48 per cent C grade and 4 per cent D grade.

Fremantle had one of the highest vacancy rates at 19.5 per cent of the 60,183sqm total office space available, something Mr Stone said could be put down to a large contingent of the stock being heritage listed and not being upgraded in recent times.

“Fremantle has always been seen as the second major area in the metro area to Perth, it is the main hub of the southern suburbs and right now there are no quality options for businesses to relocate to Fremantle,” he said.

“They are small spaces, low quality, but Fremantle, through the new town-planning scheme, is getting towards offering sites that could facilitate high-quality modern buildings that would attract people who want to live and work in Fremantle to take advantage of the amenities there.”

Subiaco and Nedlands are comparable in terms of what is driving vacancy rates, according to Mr Stone, who lists himself as  Y Research’s chief problem solver.

Subiaco is the largest suburban office market with 151,517sqm of space, but has a high vacancy rate at 10.8 per cent, exemplified by the number of ‘for lease’ signs that decorate the eastern end of Hay Street and the southern end of Rokeby Road.

While developments have bolstered the office market in the western end of Subiaco in the past 10 years, smaller spaces built in the 1980s make up a large proportion of available space in the suburb.

“Nedlands is similar to Subiaco and Fremantle. Along Stirling Highway there is a lot of old stock occupied by small mining firms,” Mr Stone said.

In Northbridge, vacancy rates are high at 14.5 per cent, with 141,620sqm of office space available.

Herdsman is the third-largest suburb for office space and recorded a relatively low 5.1 per cent vacancy rate, something Mr Stone puts down to the large spaces and high-quality building gradings.

According to Mr Stone, ‘critical mass’ is required when it comes to office space.

He said there was a general rule for real estate investment trusts investing in commercial space that required a suburban market to have more than 200,000sqm to mitigate the risk of losing a tenant.

“That way, if a tenant moves, there is somebody else likely to be in that market which you could release it to, rather than relying on someone moving from the city into that space. It is a risk measure for larger investors,” Mr Stone said.

“Because we don’t have any markets of that scale ... of the 2,200 buildings in the suburbs only nine are owned by managed property trusts.”

Two of the trust-owned properties are in Herdsman, one in Belmont (owned by Stockland) and two in Northbridge (one owned by Charter Hall and another by Investa).

There is one each in Cannington, Fremantle, Booragoon and Victoria Park.

The most likely suburb to reach the 200,000sqm mark in the next five years was Northbridge, thanks to the City Link project, although Mr Stone suggested it was debatable whether that market was suburban.

“Once it gets to about 200,000sqm, it links to the city and almost becomes like (Melbourne’s) Docklands,” he said.