Perth’s specialist street wear vendors are part of a global trend to acutely restrict supply of distributed and in-house labels – following in the footsteps of many luxury brands that use scarcity as a marketing tool. 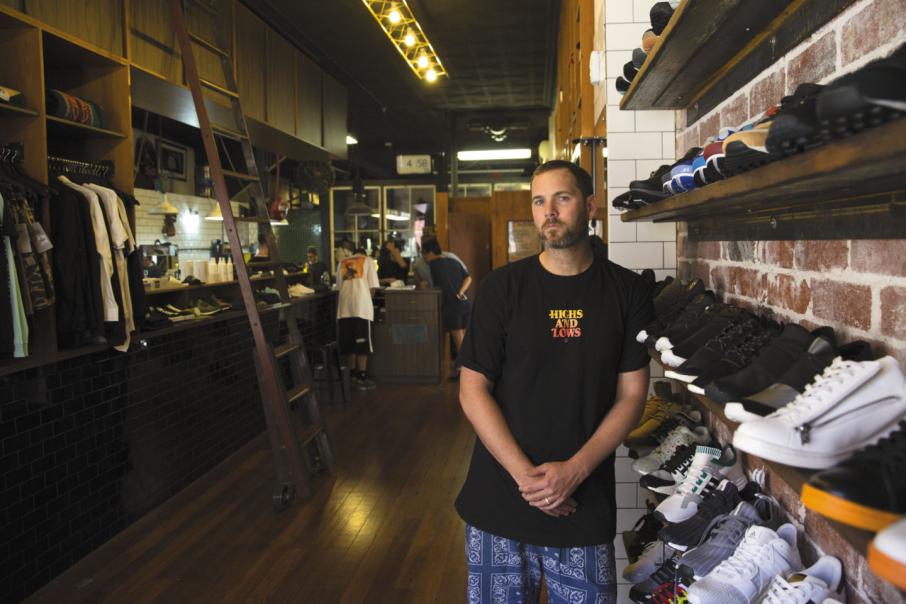 Ask any teenage boy with some fashion sense and a few dollars to spend and they will tell you how select local retailers such as Highs and Lows and friendly rival Lo-Fi work in conjunction with global brands that build hype into their hard-to-reach products.

It all comes with anecdotes that older generations would find hard to compare with their own decades-old experiences of queues, cult followings and celebrity endorsement.

That is because the internet brings product news direct to a growing army of faithful followers. But in streetwear – fashion t-shirts, sneakers and associated apparel – the purchase may not necessarily be made online.

And while Perth is at the very fringe of this trend, there are still overnight sleepouts for limited-edition shoes from big name brands such as Adidas or celebrity Kanye West’s Yeezy range.

Many of those queuing for shoes are doing so because a $200 pair of limited edition sneakers can sell online for many times that price.

Highs and Lows co-owner Matt Thomas said his store had developed the global links and reputation to access these special runs over more than a decade.

But Mr Thomas said what had been a business with a cult following had increasingly become more mainstream, as social media and celebrity endorsement had generated the kind of hype that made the purchase of such shoes something of a jackpot.

“Australia has huge demand and little supply,” he said.

“Now, consumers are being dictated to by social media and personas.

“That is why young people will want those products, because they see idols and sense of exclusivity.

“The (online) reseller community, with no emotional connection to the product, just see the dollar signs.”

Highs and Lows’ strategy has been to get into the game in its own way, allowing big brands to give it street credibility with the fashion-conscious teens and attract consumers to its own branded apparel, which it sells at three Perth stores and online.

Mr Thomas said the Highs and Lows, or HAL, branded clothing represented around a quarter of the retailer’s sales and was all manufactured in Western Australia.

That approach allowed the store to develop its own cult following.

“We are moving more and more vertically, to be unique and not get caught up in a homogenous culture,” Mr Thomas said.

With an understated shop front in Howard Street in Perth’s CBD, Garth Mariano and Matt Evans at Lo-Fi have taken a different approach with their eponymous and Butter Goods brands, which are the store’s biggest sellers among a plethora of streetwear names it also represents.

Lo-Fi does not do footwear so it has less to do with the reseller community. It has a focus on apparel, including its own brands, which it manufactures in Los Angeles and sells worldwide.

Mr Mariano said offshore sales of its Butter Goods brand had this year surpassed Australian sales for the first time since the business started in 2014.

And it had this month allowed its Lo-Fi brand to be sold in seven outlets, each in a separate country, after previously keeping its bricks and mortar access exclusive to the Perth store.

He said the retailer had watched global leaders such as Supreme and Palace in building hype and restricting supply.

Lo-Fi had, until recently, carried Palace goods, but the brand had recently cut back its retailers from 300 to 20 at the same time opening its own shop to capitalise on the cache of exclusivity.

“Most people would think it is crazy,” Mr Mariano said.

“I would say in the long term and maybe even now they would make just as much money.

Scarcity of supply also means that less hype is needed to generate demand, the kind of promotional activity that can wear thin with the more discerning buyers.

“If you get too much hype, customers tend to turn away from it," he said.

“The finicky customers, that is”.